United Launch Alliance (ULA) plan to launch an Atlas V in the 531 configuration to place two identical communications satellites in near-geosynchronous orbit for SES, SA of Luxembourg. Launch is scheduled for 2022-10-04 at 21:36 UTC from Space Launch Complex 41 at Cape Canaveral Space Force Station. Weather is forecast as 70% favourable for launch.

The payloads, SES-20 and SES-21, are identical Boeing-built 702SP C-band satellites, each with a mass of 3.5 tonnes. Both are intended to provide broadcast services to North America, with SES-20 stationed at 103° West and SES-21 at 131° West longitude. These are all-electric satellites which use a xenon thruster for orbital maneuvering and station keeping. They carry no chemical propellant and have a minimum service life of 15 years.

This launch is one of the fairly rare commercial flights of the Atlas V, which is mostly used for U.S. national security and NASA payloads. It will be the first commercial mission to use ULA’s unique direct-to-geosynchronous delivery capability, which has been used previously only by government payloads. Rather than injecting a satellite on a geosynchronous transfer orbit and relying on its own on-board propulsion to circularise the orbit and change its plane to equatorial, the Atlas V Centaur upper stage delivers the satellites directly to their near-final orbits in a series of burns and deployment operations which take more than six hours after launch. By having the launch vehicle perform these maneuvers, the satellite launch customer can have a heavier payload with a longer on-orbit life than if the satellite had to carry the propellant and engine to raise its own orbit.

Here is a pre-flight preview from Everyday Astronaut, which misstates the orbital destination as geostationary transfer orbit instead of the actual direct delivery to geosynchronous orbit. 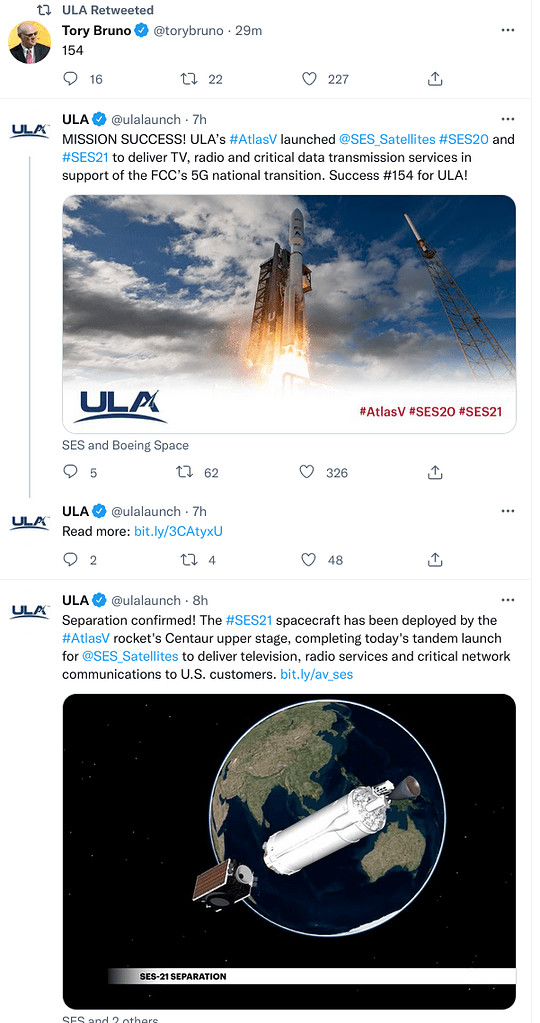