Virgin Orbit “Start Me Up” Launch

Virgin Orbit plans to launch their LauncherOne rocket from its modified Boeing 747 mother ship “Cosmic Girl” on 2023-01-09 around 22:16 UTC. The air launch of the rocket occurs when the carrier aircraft reaches the specified drop point in its “racetrack” flight path, so the exact launch time may vary. Live stream coverage of the launch is scheduled to start at 21:15 UTC and will cover the flight to the drop point and subsequent flight to orbit.

The mission will place nine satellites in a 555 km Sun-synchronous orbit. Payloads include two miniature space weather monitoring platforms for the U.S. National Reconnaissance Office (NRO); a pathfinder for development of the UK’s own global positioning satellite system; an in-orbit manufacturing testbed built in Wales; an Earth observation satellite built in Poland for Omani company ETCO; the STORK-6 Earth imaging satellite, also built in Poland, which will join five satellites of the planned 14 satellite constellation previously launched by Virgin Orbit and SpaceX; two satellites for the UK’s Defence Science and Technology Laboratory for monitoring radio communications; and an in-orbit demonstration satellite for the planned 24 satellite AMBER system for maritime traffic monitoring. Total payload mass is around 100 kg. 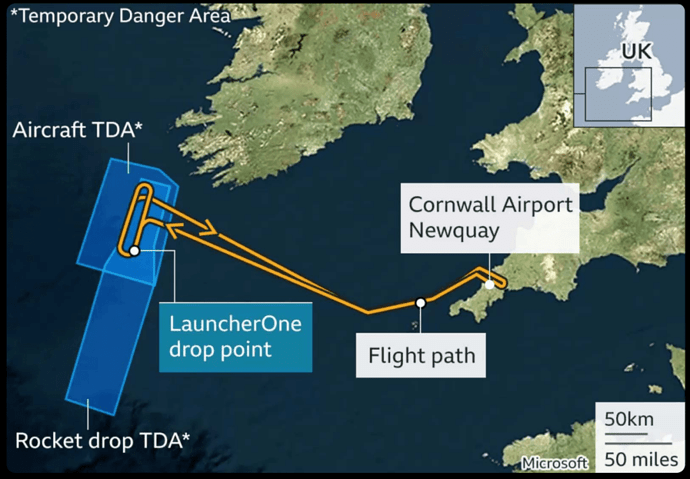 1024×711 226 KB
The 747 will fly from Spaceport Cornwall in the UK to its launch position southeast of Ireland. This will make this mission not only the first orbital launch from the UK, but the first such launch from western Europe. In 1971, the UK launched its first satellite, Prospero, on the Black Arrow rocket, but that launch was from the test range at Woomera, Australia, after which both the rocket and satellite programmes were immediately cancelled.

Here is a pre-flight preview from Everyday Astronaut with details on the payloads.

After a successful air drop and apparently normal first stage burn, the launch failed with an “anomaly” during the second stage burn that resulted in the launcher failing to reach orbit. The payloads, or what’s left of them after falling back into the atmosphere on a steep suborbital trajectory, splashed into the Atlantic. Virgin Orbit released this statement. 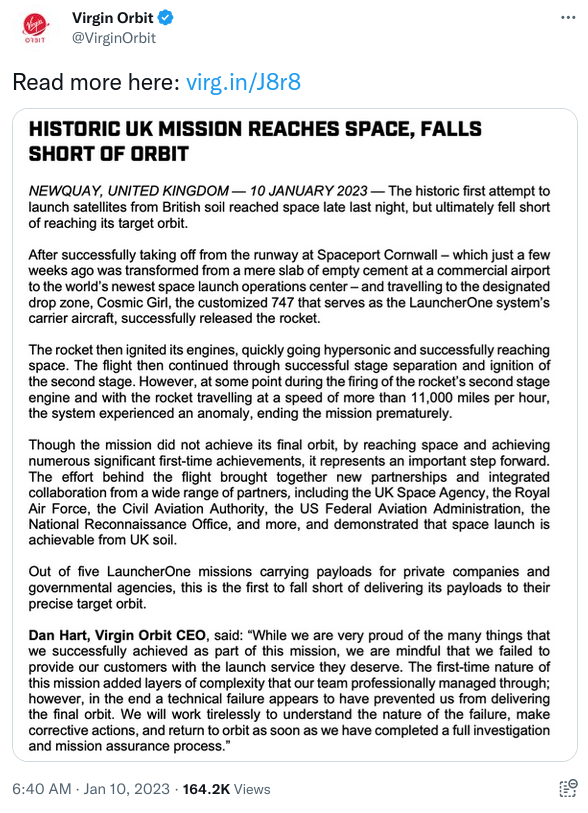 The aircraft flew to its designated drop location over the Atlantic Ocean off the southern coast of Ireland and released the LauncherOne rocket at approximately 6:11 p.m. Eastern. While telemetry during the live webcast of the launch was unreliable, reporting what appeared to be spurious speed and altitude figures at times, the company reported seven minutes later that the rocket’s upper stage and payloads had reached orbit.

“LauncherOne has once again successfully reached Earth orbit!” the company announced in a tweet it later deleted. “Our mission isn’t over yet, but our congratulations to the people of the UK! This is already the first-ever orbital mission from British soil – an enormous achievement by @spacegovuk and their partners in government!”

The launch then appeared to be in a coast phase before a second burn of the upper stage’s NewtonFour engine, followed by payload deployment. But nearly a half-hour after the announcement of reaching orbit, the company suddenly revealed the launch had instead failed.

“We appear to have an anomaly that has prevented us from reaching orbit. We are evaluating the information,” the company announced. The company provided no other information about the anomaly, including at what state of flight it took place and why the company incorrectly reported reaching orbit. It did confirm that that the Boeing 747 had landed safely back at Spaceport Cornwall.

The failure comes at a precarious time for Virgin Orbit, which has struggled to increase its launch rate and generate revenue. The company, in a Nov. 7 earnings call, reported it closed the third quarter with $71 million in cash, after reporting negative free cash flow of $52.5 million. The company raised $25 million from Virgin Group in early November and another $20 million from Virgin Investments Limited, an investment arm of the Virgin Group, Dec. 20.

The livestream of the launch (replay included in the original post) approached Soviet levels of transparency. The first indication that the rocket had been dropped was at 1:54:59 where the view cuts to the aft camera on the rocket, showing the first stage burning. Launch telemetry does not start until 1:55:35, when it shows the rocket at 2,618 mph and 115,771 feet altitude (the commentator noted “in the aerospace industry, Imperial units are used). The flight continues with a musical soundtrack and the plume seeming to expand, with telemetry shoring smooth acceleration and ascent. At 1:56:47 they cut away to the vehicle status page, which shows propellant in the first stage almost entirely depleted. The announcer then reports main engine cutoff as normal. For a few seconds, the speed continues to increase, presumably indicating the second stage is firing, but there is no indication of this on the status page.

Next, at 1:57:49, we cut to a forward camera view which shows what, with a little imagination, you can see might be payloads exposed after fairing jettison, illuminated very weakly by the engine plume of the second stage engine. Well, maybe it takes more than a little imagination. The telemetry now reports the speed as 8425 mph and altitude as 0. Speed then jumps to 0 mph.

At 1:58:12 the forward camera view is replaced by the trajectory plot, showing the rocket proceeding southward from the launch location. Speed and altitude are now both zero. Telemetry then returns at 9,110 mph and 506,907 feet. The status page then returns, showing the second stage burning with fuel at 77% and oxidiser at 56% and the engine gimbal centred. Velocity jumps around, but seems to be overall increasing. The launch control centre continues to report nominal stage two burn and trajectory.

Cut back to the status page, which now shows fuel at 31% and oxidiser at 0% and the engine gimbal near limit toward the bottom. Engine gimbal starts jumping around as if the rocket has gone all Kerbal with Jeb asleep at the controls, while fuel magically jumps back to 50% and oxidiser 15%. As this is happening, speed remains at 0 mph, but altitude reports −2,212 feet. The browser showing the status display then crashes and is replaced by a Virgin Orbit logo.

The trajectory plot returns, showing a continued vertical climb. Altitude shows crazy jumps updating around once per second. There is then a call that sounds like “Newton 4 [second stage engine] shutdown initiated”. Shortly after, the rocket telemetry freezes at 0 mph and 244,030 feet.

There following a long musical interlude with views of the Cornwall coast and the mission logos, with occasional open microphone interjections. At 2:22:42, the commentator returns and claims the rocket is now in stage 2 coast, presuming it to be in orbit. At 2:30:05, the announcer returns to say “LauncherOne has suffered an anomaly which will prevent us from making orbit”. At 2:38:20 the carrier plane returns and lands. The live stream ends at 2:52:45 without another word on the status of the rocket.

Here is Scott Manley’s analysis of the launch failure. He manages to dig some plausible detail out of those murky images from the forward looking camera after the second stage burn started, and shows a meteor camera video which may have captured the re-entry of the second stage and payloads.

There does seem to have been a fair bit of jingoism about the first kinda-sorta-maybe launch from “British soil” – or at least from over international waters not a million miles from British soil. That would certainly have been something to boast about, if it had worked.

However, it does seem that not enough attention had been paid to telemetry – ground stations, etc. That is bad because Virgin Orbit may not have collected enough data to understand why this particular flight failed. Perhaps it would have been smarter at this early stage in the rocket development program to have chosen a different launch site where reliable telemetry would have been more assured. Australia, maybe? Or Florida?