Note that the unit in these visualisations is a US$ 100 bill. If you used dollar bills, everything would be 100 times larger.

The national debt of the United States recently crossed the threshold of US$ 30 trillion, or around 128% of Gross Domestic Product, where 100% is generally considered to be danger zone. (Spare me the quibbles over how bogus these numbers may be—in every case, they are rigged to underestimate the severity of the situation.) Here is a snapshot from US Debt Clock.org. 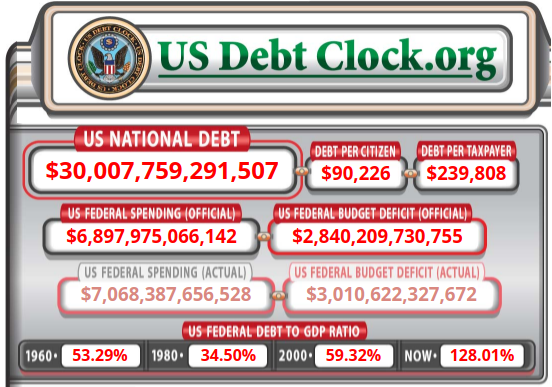 When I first became aware of the national debt, around 1960, it stood at around US$ 300 billion, or roughly half the then-GDP. It has since grown by a factor of a hundred, while GDP has grown by around a factor of 40. Dollar figures are, of course, nominal, not accounting for depreciation of the unit of account, which is why ratios such as debt/GDP are more useful in making comparisons. A 1960 gold-backed dollar had the purchasing power of 9.52 BidenBucks today.

Being an astronomy buff, I could comprehend a number like 300 billion: it was comparable to the number of stars in the Milky Way galaxy. Thirty trillion is…more difficult.

Random thought: One way of dealing with the tidal wave of illegal aliens pouring over the southern border into the US would be for the Biden Administration to include an invoice for $100,000 in the Welcome package before offering them a seat on a plane to the interior of the country. It might make a few of them turn around and go back!

Of course, the sad part about all of this is that most other “Developed Countries” are in a broadly similar mess. Since one man’s debt is another man’s asset, there are someday going to be a lot of investors feeling a distressing amount of pain & loss.

The central banks and governments are in a corner. What will they choose?

A. Raise interest rates to address inflation and crash the market and economy.
B. Let inflation rage and face the political consequence
C. Go full MMT.

I think they will try to wait it out and hope inflation moderates. If it doesn’t, they will pick C.

Inflation can’t exist.
It is base effects.
It is transitory.
Inflation is good.
It is due to COVID.
It is those evil corporation’s fault.

A. Raise interest rates to address inflation and crash the market and economy.

A speculation – This time it really is different!

In prior financial crises, the US had not yet adopted the “environmental” policy of sending manufacturing overseas to claim that we were cutting pollution (when in reality we were simply moving it elsewhere). As a consequence, today many of the manufactured Real Goods we require are made by workers in other countries and then imported.

So what happens when interest rates go up? The stock market may crash – although some would prefer to use the expression “return to reality”. But most impacts on employment and the real economy would likely be felt far away in the countries to which former US industry has been offshored – just like the pollution occurs far away.

“Investors” (really mostly speculators) would indeed have lost paper gains as stock prices underwent reversion to the mean. But one man’s debt is another man’s asset, and interest payments on borrowed money would raise the incomes of lenders while they cut the incomes of borrowers. Real Assets in the US – factories, farms, and houses – would still exist, regardless of the interest rate.

In the meantime, higher US interest rates would strengthen the US Dollar, reducing the dollar cost of those irreplaceable imports and helping US consumers.

Perhaps raising US interest rates would indeed crash the market, but have a very much lesser effect on the economy as experienced by the vast majority of the people?