It may come as a surprise to some people, but Russia has been there already. After the 1917 revolution, the Bolsheviks, relying on the dogmas of Marx and Engels, also said they would change existing ways and customs, and not just political and economic ones, but the very notion of human morality and the foundations of a healthy society. The destruction of age-old values, religion and relations between people, up to and including the total rejection of family (we had that, too), encouragement to inform on loved ones—all of this was proclaimed progress and, by the way, was widely supported around the world back then and was quite fashionable, same as today.

The fight for equality and against discrimination has turned into aggressive dogmatism bordering on absurdity, when the works of the great authors of the past—such as Shakespeare—are no longer taught at schools or universities because their ideas are believed to be backward. The classics are declared backward and ignorant of the importance of gender or race.

Victor Davis Hanson has taken to calling leftists in the U.S. “Jacobins”. I think Vlad’s got it right—they’re Bolsheviks.

You know something has gone terribly wrong when the world’s moral high ground has been ceded to Vladimir Putin.

Putin is a murderous Thug oligarch. However, he is intelligent enough to know that a stable moral society is best for the stable operation of his oligarchy.
Remember The Godfather ? Michael Corleone saw the need for the church in his world too.

We have to look for the hopeful signs here. While the “leadership” of the West has collapsed into the likes of Biden*, Boris Johnson, and that unmentionable idiot in Canada, Russians are proudly studying Shakespeare along with Tolstoy and Chinese are keeping Western classical music alive along with their own ancient arts.

Civilizations are born and die. Where are the Incas now? It is more fun to be part of a vigorous growing civilization than a decadent wasteland of stupidity – but it is good to know that while our local Best & Brightest are condemning us to poverty & unrest, elsewhere on the planet elements of the human race are still marching forwards.

Some former ‘refusnik’ friends have been saying for years, “I left there and it followed me here”. They saw it before anyone else.

Very strange for this Putin:

It is notable that he targeted Marx and Engels rather than Lenin and Stalin.

I still find it surprising to see a strand of thinking in America praising the world’s current actual dictators (in Russia and China, among others).

Maybe Putin simply understand the chaos which would result from ‘wokeism’ when it comes to patronymics?? I can hardly imagine, and I used to think infinite pronouns were confusing.

I still find it surprising to see a strand of thinking in America praising the world’s current actual dictators (in Russia and China, among others).

Since I am at times guilty of that, let me try to explain myself.

First, I respect competence – and any objective observer would have to acknowledge that Putin and Xi often display competence, whereas almost all the rest of the world’s political leadership clearly are not competent; indeed, many are self-destructively stupid if not actually corrupt – not just Brandon.

Second, Putin and Xi obviously are striving to do the best they can for their own citizens … as the leaders of any nation should. In contrast, from Europe to the US, we see political leaders who put the interests of illegal aliens ahead of their own citizens, and who subscribe to destructive unscientific dogma despite the negative effects on their populations.

Given the choice between a “democratically-elected” (cough! 81 Million votes???) incompetent and a militarily-unadventurous strong man focused on building his own nation & people, which would you choose?

To be very clear, you don’t mind the murdering of political opponents, or the genocide of ethnic minorities, so long as the perpetrator’s propaganda apparatus portrays them as competent?

Sorry, who is “Brandon”?

In contrast, from Europe to the US, we see political leaders who put the interests of illegal aliens ahead of their own citizens

To be very clear, you don’t mind the murdering of political opponents, or the genocide of ethnic minorities, so long as the perpetrator’s propaganda apparatus portrays them as competent?

This is getting very close to, or over the threshold of trolling, which we don’t do here. If that’s what you’re looking for, please look elsewhere.

Productive civil discussion works only when those involved assume the good will and shared interest in facts of all involved.

I am asking questions to clarify the pro-Russia/China-leader statements made, rather than simply assuming the obvious inferences are correct. If you consider that trolling, then I probably should indeed look elsewhere.

If you consider that trolling, then I probably should indeed look elsewhere.

Indeed. Assuming comments are made in good faith and not endorsing murder is the way it’s done here.

militarily-unadventurous strong man focused on building his own nation & people

I will try one more time to engage on actual points made.

Gavin, how militarily-adventurous do you consider Putin’s activities in Crimea and the Ukraine, Syria, and Libya? Same question about China’s activities on the Indian border, in the South China Sea, and in Taiwanese airspace?

Mohawk – Why not use your real name? It makes the conversation more open. And seriously, you don’t know about Let’s Go Brandon?

You point to some activities on the borders of Russia & China and shout Ah Ha! This proves that Putin and Xi are bad people! But that seems to take things out of context. How close is Afghanistan to the borders of the US, for example? It seems one ought to consider the behavior of all political leaders if one is to identify expansionist military adventurism.

It is public knowledge that Crimea was historically part of Russia – the place where the English did their Charge of the Light Brigade against Russian guns on Russian territory. Eastern Ukraine is filled with ethnic Russians with deep suspicions of the Ukrainian government. Of course Putin is going to be concerned about his fellow Russians. No surprise.

China considers Taiwan to be part of their country. For long enough, Taiwan considered mainland China to be part of its proper territory. Forget silly legalisms – the situation between China and Taiwan is perfectly understandable – although extremely difficult to resolve. Could we really expect China to simply give up and walk away from Taiwan? Compare and contrast with Abraham Lincoln’s refusal to allow sovereign US States to secede from his Federal Union.

It may hurt us to admit it, but try to look dispassionately at the US supporting the European assault on Libya, and invading and occupying Iraq & Afghanistan, and establishing military bases around the world – that looks more like expansionist military adventurism than what Putin & Xi are doing. We excuse what our leaders did in our name because we believe the US motives were good. Putin and Xi probably believe their motives are good too.

To be clear, if the Chinese navy started patrolling the West Coast of the US in the same way the US Navy patrols the South China Sea, I hope the US will have a leader who stands up for the US and makes the limits very clear. When/if Xi sends his navy across the Pacific, I will consider him to have crossed the Rubicon into expansionist military adventurism. How about you?

It may hurt us to admit it, but try to look dispassionately at the US supporting the European assault on Libya, and invading and occupying Iraq & Afghanistan, and establishing military bases around the world – that looks more like expansionist military adventurism than what Putin & Xi are doing.

Check out the numbers on the Wikipedia (yes, I know) page “List of countries with overseas military bases”. Here are the numbers of overseas bases maintained today by railroad-era, continental-scale empires. In the listing for the U.K., I exclude bases in U.K. overseas territories, which are considered part of the country. If they were included, their number of bases would be 25.

As a Soviet propaganda publication from the 1980s asked, “Whence the threat to peace?” 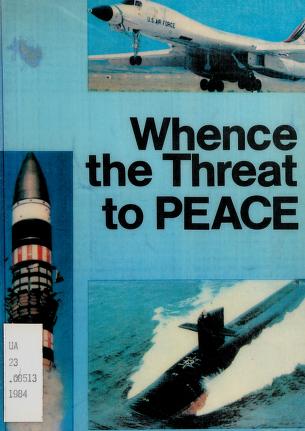 A further thought, triggered by Mr. Walker’s reference to “railroad-era continental-scale empires”: perhaps war should be thought of as so Twentieth Century? If Putin & Xi are intent on world domination in the era of nuclear weapons, perhaps trade would be a more effective offensive weapon than military forces?

In this view, militaries are important for defensive purposes – whereas trade would be the vehicle for imposing their will on other countries. For example, Putin could choose to bring Europe to heal by simply cutting off the gas supply at an opportune moment. Xi could reduce the US to chaos by simply ceasing to ship the manufactured goods which the US can no longer make for itself.

In the rather inadequate theoretical “Free Trade” model, these would be silly scenarios, since trade is automatically balanced; Russia & China would need Europe and the US as much as we need them. But over the last few decades we have allowed the creation of unbalanced world trade. The consequences could be very serious for us – if Putin and Xi really are as bad as some fear.

Gavin, how militarily-adventurous do you consider Putin’s activities in Crimea and the Ukraine, Syria, and Libya? Same question about China’s activities on the Indian border, in the South China Sea, and in Taiwanese airspace?

Gavin had stated: “In contrast, from Europe to the US, we see political leaders who put the interests of illegal aliens ahead of their own citizens.”

Territorial aggrandizement has been a historic measure of putting your own citizens ahead of others.

Clearly, Putin and Xi are thugs who also will put their own interests ahead of their citizens’.