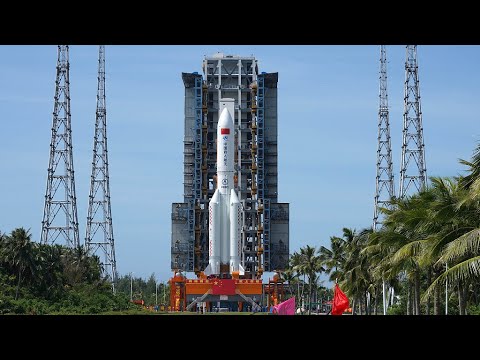 The China Academy of Launch Vehicle Technology (CALT) plans to launch the Wentian laboratory module to expand the Tiangong space station now in low Earth orbit. The launch is scheduled for 06:20 UTC on 2022-07-24 on a Long March 5B (CZ-5B) rocket from the Wenchang Space Launch Center on Hainan Island. Wentian is the first of two Laboratory Cabin Modules planned to dock with the Tianhe core module of the station. 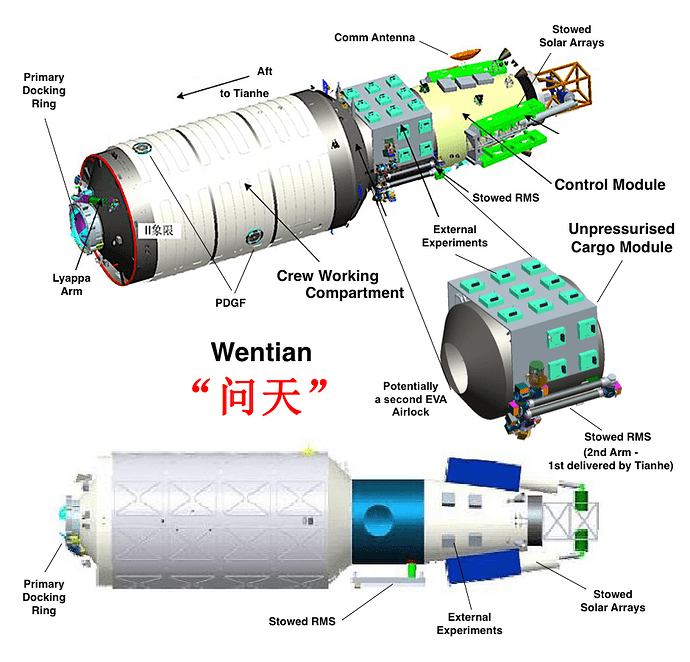 938×900 538 KB
The module contains habitation space and facilities for both experiments in the pressurised module and externally, its own solar panels, and a propulsion system which can back up the one on the core module. The mass of the module is estimated as 22.5 tonnes.

The Long March 5B will be making its third flight. This is a variant of Long March 5 consisting of the hydrogen/oxygen core stage and four LOX/RP-1 boosters. It is intended to launch heavy payloads into low Earth orbit. It is an expendable heavy launch vehicle and is notable for, on its two previous missions, having the heavy core stage make an uncontrolled re-entry after its orbit decays.

The launch was a complete success, delivering the space station module into an orbit from which it will chase down and dock with the core module, with docking planned around 13 hours after launch. I have cued the replay video to start one minute before liftoff.

We have to love China! No time for Political Correctness!
Note all the men sitting around the control room were not wearing masks – indicating an informed responsible approach to health in the workplace.
Note also that the lady who pushed the final button (Triggering an announcement? Or maybe disabling an abort procedure? Surely the launch sequence at that point was computer-controlled) was allowed to wear a mask – indicating respect for individual decisions.

Excellent Spacex-level live video coverage. If the Political Class in the West were not devoting their efforts to demonizing the elements upon which life depends and promoting wars, they might begin to ask themselves if they are losing (have lost?) their technological edge – and history tells us what that can lead to.

Once again, the core stage of the Long March 5B rocket used in this launch is headed to an uncontrolled re-entry, with the latest prediction 2022-07-30 at 18:26 UTC plus or minus 6 hours. This will place the re-entry on one of the orbital tracks highlighted in blue on the map below. The Aerospace Corporation posts current predictions, which will be increasingly refined as the event approaches.

Around five tonnes of debris are expected to fall to Earth along the track where re-entry begins. Here is more on the event and the risks to those along the orbital path from The Verge. 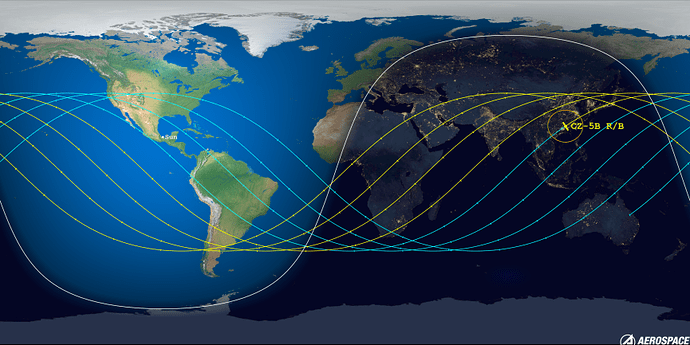 Interesting that the uniforms and station interior trim paint are blue rather than red.

blue rather than red.

Looks like China has adopted the US Media disinformation that Blue is the color associated with Far Left socialism/communism while Red is associated with spineless self-servers.

Forget the Soviet Red Army. Forget the Scarlet Banner. Forget Red China. All of that has now been memory-holed. Sad thing is that the spineless self-servers have gone along with this rewriting of history – even doing things like starting websites like RedState, which bills itself as a “Conservative Blog”. 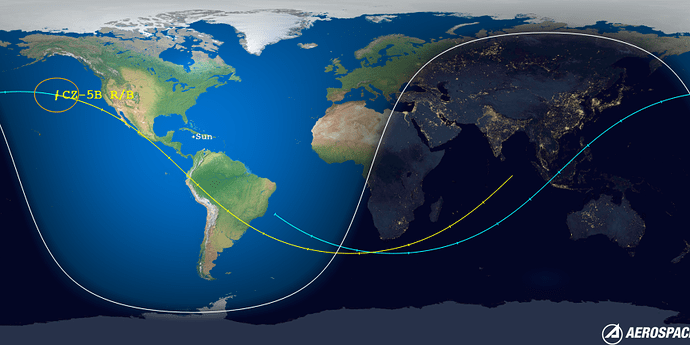 865×433 307 KB
The circled marker shows the position at the middle of the predicted window and the terminator (night/day line) is drawn for that time.

If you’re in Europe, North America, Africa, or Australia, you can stop looking up.

Here is a compilation of mobile phone video of the Long March 5B core stage re-entry as seen from Sarawak in Malaysia. The Chinese human spaceflight agency estimated the impact zone for debris that survived re-entry as 119.0° E, 9.1° N, near Palawan Island in the the western Philippines. There have been no reports of debris falling on land.