Oh dear. This guy is so wrong I don’t know where to start.

The reconstructions on modern non-human skeletons aren’t, to my eye, based on understanding of muscle attachment sites and biomechanics. The hippopotamus is the most egregious. That said, if hair and feathers are not preserved in the record, one might reconstruct the dinosaur swan as something more like a pterodactyl.

Then there’s Tea Rex, which I’ll post as soon as I figure our how to do so.

Note that Kosemen was not trying to make accurate reconstructions from bones, but rather illustrate errors made by paleontologists and illustrators back in the day who were guided by their preconceptions of what the animals looked like rather than the fossil evidence at hand.

It seems that reconstructions based on fossils have always been quite speculative, if not downright fanciful. I recall reading something a few years back about how there had been significant revisions of these reconstructions and that the images presented in the past were pretty far off.

For a delightful episode of dinosaur mistaken identity, see the "I lost my head at the Peabody Museum” incident in 1981.

Ever seen a wild turkey?
It’s like with “classical” marble statues: we know they were painted, but we don’t know the palette….

I’m fascinated by what animals could have existed that weren’t fossilized. Imagine some of the airborne creatures that may have lived in the more heavily-oxygenated atmosphere of the Cretaceous era.

Indeed—just consider all of the bizarre creatures currently living on Earth which are unlikely to be fossilised. For example, those three-eyed critters (genus Triops) that popped up in Arizona after a recent rainstorm. 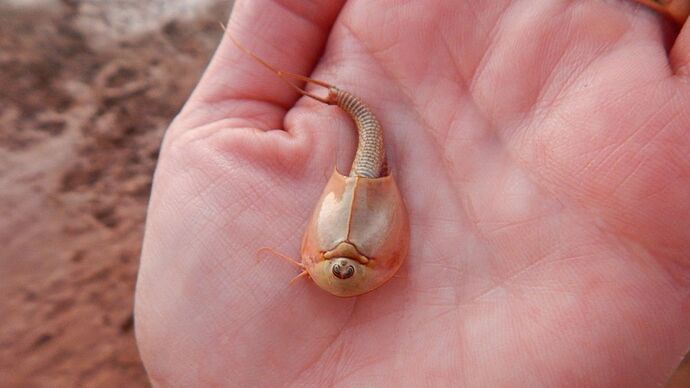 Their eggs can stay dormant for decades, waiting for water.

True. That said, when I read the article, it seemed positioned as a ‘mock the dino reconstructors’ by promoting some uninformed artist. Of course, reconstructions are subject to fads. They also incorporate new ‘dino data’.

Interesting. I wonder if my home state of Texas has any similar sites. As I understand, much of this place was underwater when dinosaurs roamed the earth.