What Did the Event Horizon Telescope See in the Core of M87?

In April 2019 the Event Horizon Telescope (EHT) collaboration released an image of the core of galaxy Messier 87 (M87) which appeared to show the accretion disc around the supermassive black hole, M87*, believed to drive the plasma jet that emerges from the galaxy. The image was produced from data collected by a global network of radio telescopes whose data were combined by interferometry to be equivalent to a telescope with an antenna as large as the Earth. Production of the image from the raw data was a fantastically complex computational process in which many assumptions and choices of parameters had to be made due to the sparse data collected by the radio telescope array.

Now, in a paper in press at the Astrophysical Journal, “The jet and resolved features of the central supermassive black hole of M 87 observed with EHT”, three Japanese researchers report their work in independently reconstructing images from the public raw data released by the EHT collaborators. Here is the abstract:

We report our independent image reconstruction of the M 87 from the public data of the Event Horizon Telescope Collaborators (EHTC). Our result is different from the image published by the EHTC. Our analysis shows that (a) the structure at 230 GHz is consistent with those of lower frequency VLBI observations, (b) the jet structure is evident at 230 GHz extending from the core to a few mas, though the intensity rapidly decreases along the axis, and (c) the unresolved core is resolved into bright three features presumably showing an initial jet with a wide opening angle of about 70 deg.

The ring-like structures of the EHTC can be created not only from the public data, but also from the simulated data of a point image. Also, the rings are very sensitive to the FOV size. The u-v coverage of EHT lack about 40 micro-asec fringe spacings. Combining with a very narrow FOV, it created the 40 micro-asec ring structure. We conclude that the absence of the jet and the presence of the ring in the EHTC result are both artifacts owing to the narrow FOV setting and the u-v data sampling bias effect of the EHT array. Because the EHTC’s simulations only take into account the reproduction of the input image models, and not those of the input noise models, their optimal parameters can enhance the effects of sampling bias and produce artifacts such as the 40 micro-asec ring structure, rather than reproducing the correct image.

What they saw was very different: 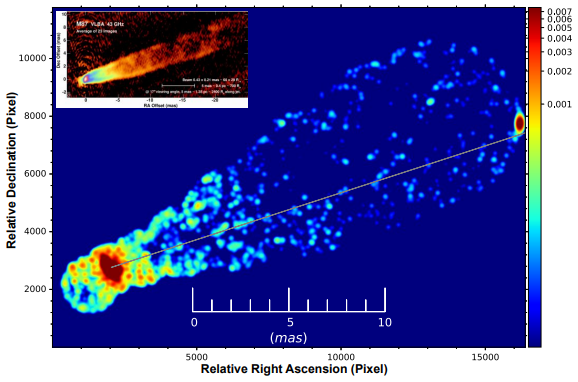 and very much like previous lower resolution images of M87’s core from very long baseline radio telescope observations inset at the top left of the image. Further processing of the unresolved “jet launching region” at the bottom left shows that the appearance of the ring structure reported in the EHT paper is sensitively dependent upon the setting of the field of view parameter and may be an artefact of the sampling bias of the telescope array composing the EHT.

We speak of a “replication crisis” in the softer sciences. But many “hard science” results today involve massive and complex computational steps between the raw data collected and the results presented to the public. It is interesting to see that independent analysis of the identical data that went into the EHT image can produce an entirely different result.

It will be interesting to follow the dialogue between these two groups over their interpretations of the EHT raw data.