What If Boeing, Not Airbus, Had Bought the Bombardier C Series Airliners?

Here is more about the troubled history of the Bombardier C Series, which became the Airbus 220.

I wonder how often decisions about the size of desirable aircraft for various market segments - and assessments of the size of those segments - remain valid. I have the impression they may be changeable within the development time of a new aircraft.

Notable is that the 4 largest customers are US-based: 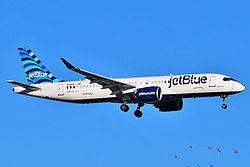 Not EU entities subject to political pressure or entities in countries where bribery may be a factor in aircraft sales.

I also notice that the nose shape of this aircraft looks a lot like the Boeing 787. Distinctive, and I think, esthetic.

I wonder how often decisions about the size of desirable aircraft for various market segments - and assessments of the size of those segments - remain valid.

Some of the considerations are entirely independent of what one usually thinks of as “the market”. For example, regional airlines in the U.S. which are affiliated with major carriers are usually contractually bound by scope clauses negotiated between the major carrier and its pilots’ union. A scope clause limits the number of seats available on planes flown by the affiliate, and is intended to protect the jobs of union pilots at the major, which might otherwise replace the routes they fly with planes operated by the affiliate, whose pilots are paid less. In the U.S., American, Delta, and United all limit their affiliates’ planes to 76 seats and 86,000 maximum takeoff weight. This keeps their regionals from buying the 90 to 100 seat planes usually operated by regional carriers in Europe and Asia, and sometimes they operate more flights on a route purely because they are forced to use smaller planes. This constraint could change at any time with the renegotiation of a union contract and has nothing to do with customer preferences or operating efficiency. The Embraer E175 and Bombardier CRJ550 both exist almost entirely to be sold into the U.S. market due to scope clauses.