What's a Factor of 2000 Among Innumerate Morons?

Imagine a country whose executive branch is filled with people so stupid that nobody said, “Hey, does that make any sense?” before putting it in the mouth of the chief executive. These are the same poindexters who say they’re going to achieve “net-zero carbon emissions by 2050”.

@SteveKrak
Official @POTUS account tweets the U.S. is receiving 70,000 tons of baby formula. Actually it’s 70,000 pounds, so less than 40 tons. Now deleted. Not before it was spread by various blue checks. Good thing the Disinformation board was disbanded… 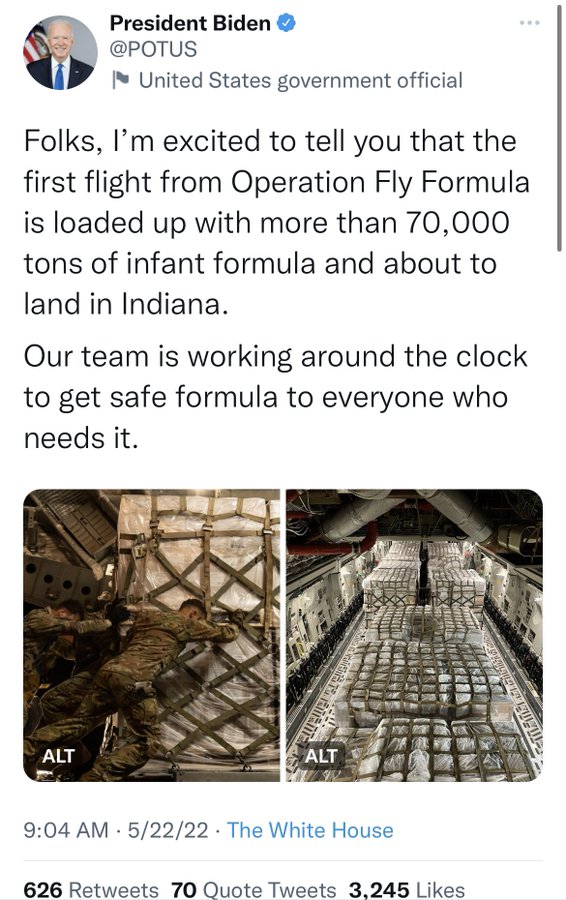 Think of the carbon footprint!

The daily war propaganda is preparing us for the coming “war on hunger” caused by (drum roll) Putin. Then, we can all depend on the ever-benevolent federal government for our daily allotment of “sustainable” calories, along with our “sustainable” energy and medical care. Get ready for the expiratory tax, since exhalation contains about 5%CO2; inspiration, we will be benevolently reminded, will remain absolute free.

The question that never used to occur to me is whether any baby formula is being delivered? Today all you have to do is claim you did something and like the four star general post a picture from a video game.

70 thousand pound for 3 million babies. They each get .02 lbs of formula. Just a tad less than required.
Even less impactful than the strategic petroleum reserve release.

Don’t count on these clowns to match Operation Vittles.

The question that never used to occur to me is whether any baby formula is being delivered?

The measly 70k pounds will be delivered to a store serving a high number of single mothers of color (“colored mothers”) with a disproportionate share of transgendered babies. CNN, PBS, NYT will be there to photograph the mothers crying for joy and thanking President Biden*. Full coverage on that night’s TV news, and then the story is over – never spoken about again in polite company. Problem solved.

In a way, the baby formula story is a straw in the wind about the downsides of concentration. In a nation of about 300 Million, there are apparently only 4 plants which manufacture baby formula. The likelihood is that something similar could be said about many other essentials, and there are many required physical products for which there are 0 plants in the US manufacturing them. One would hope that our Revered Leaders would think about that – and maybe do something about it before they pick fights simultaneously with Russia & China.

The biting sarcasm and irony in this thread is similar to the анекдоты of the Soviet era. The dark humor and ritual around it was without a doubt a coping mechanism. My favorites were the Radio Yerevan style jokes, which were half avant-la-lettre shitposting targeting Caucasus minorities and half dark humor against the regime.

Here is Radio Yerevan, our listeners are asking: “What is the difference between capitalism and socialism?”

We’re answering: “In a capitalist society man exploits man, and in a socialist one, the other way around.”