On 2022-01-27, a post here, “SpaceX Falcon 9 Upper Stage to Hit the Moon” reported that orbital analysis had identified a recently-observed near-Earth object designated WE0913A on a trajectory to impact the Moon as the upper stage of the SpaceX rocket that launched NASA’s DSCOVR (“GoreSat”) to the Earth-Sun L1 point in February 2015.

Subsequent analysis by astronomer Bill Gray, reported by SpaceNews on 2022-02-13, “Chinese rocket, not Falcon 9, linked to upper stage on lunar impact trajectory” indicated that the SpaceX upper stage did not pass sufficiently close to the Moon to be deflected into a trajectory which would ultimately result in an impact. He concluded, based upon what he described as “circumstantial” but “fairly convincing evidence” … “that the object about to hit the moon on 2022 Mar 4 at 12:25 UTC is actual the Chang’e-T1 rocket stage.”

This would be the spent rocket stage from a Chinese Long March 3C booster in October 2014 that launched a sample return capsule on a free return trajectory around the Moon to test whether it could survive Earth re-entry at lunar return velocity.

In yet another twist, Space.com now reports “China says moonbound rocket stage was not from 2014 lunar mission”.

"According to China’s monitoring, the upper stage of the rocket related to the Chang’e-5 mission entered into Earth’s atmosphere and completely burned up,” foreign ministry spokesperson Wang Wenbin said Monday (Feb. 21) on a Chinese government website, first spotted by SpaceNews.

So, if the Chinese are to be believed (heh), something is going to impact the far side of the Moon Thursday week, 2022-03-03, but nobody knows exactly what.

For once, the Chinese are not playing “the long game”, and trying to deceive us for their benefit.
Below is zoomed in image of the rogue lunar rocket. 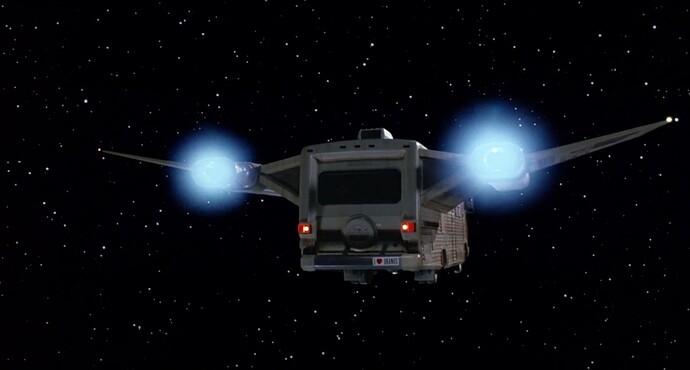 Wonder why that isn’t on RVtrader.com?

Are there any seismographs active on the lunar surface? If tremors from the impact reveal something important about the interior of the Moon, all the different space agencies will be clamoring to prove it was their rocket. Success has a thousand fathers …