Why Do Lionel O Scale Model Trains Use Three Rails? 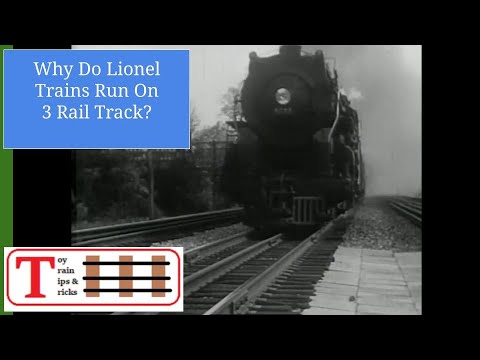 As explained in Raymond F. Yates’s 1951 The Boys’ Book of Model Railroading, the main reason Lionel adopted AC power and a three rail system was cost and simplicity of wiring layouts. As I wrote in my review of the book,

[W]hy did Lionel opt for AC power and a three rail system rather than the obvious approach of DC motors and two rails, which makes it easier, for example, to reverse trains and looks more like the real thing? The answer is that a three rail system with AC power is symmetrical, and allows all kinds of complicated geometries in layouts without worrying about cross-polarity connections on junctions. AC power allows using inexpensive transformers to run the layout from mains power without rectifiers which, in the 1950s, would have meant messy and inefficient selenium stacks prone to blowing up into toxic garlic-smelling fumes if mistreated. But many of the Lionel remote control gizmos, such as the knuckle couplers, switches, semaphore signals, and that eternal favourite, the giraffe car, used solenoids as actuators. How could that work with AC power? Well, think about it—if you have a soft iron plunger within the coil, but not at its centre, when current is applied to the coil, the induced magnetic field will pull it into the centre of the coil. This force is independent of the direction of the current. So an alternating current will create a varying magnetic field which, averaged over the mechanical inertia of the plunger, will still pull it in as long as the solenoid is energised. In practice, running a solenoid on AC may result in a hum, buzz, or chatter, which can be avoided by including a shading coil, in which an induced current creates a magnetic field 90° out of phase to the alternating current in the main coil and smooths the magnetic field actuating the plunger.

At the 8:05 mark in the video, there is a gorgeous example of that pinnacle of Lionel model railroading, the giraffe car, with a whole train of them encountering obstacles above the tracks.

As someone who admires and loves scale. I find this a grievous sin .