Why Is This House in Scotland in a Giant Chain Mail Box?

You may want to turn on the subtitles for this one if your ear isn’t calibrated for the Scottish accent.

I had not realized that Portland cement was subject to such deterioration from (very pure) rainwater. After all, Portland cement is used in areas such as dams & culverts where it is permanently exposed to water. Northern Europe is notorious for its high rainfall, from Ireland to Switzerland, so this deterioration problem seems rather unusual. Unless the standard approach for buildings which don’t have such high architectural value is simply to slap another layer of stucco on top?

According to Robert Courland’s Concrete Planet, although the Romans completely mastered the technology of hydraulic concrete, sometimes building structures in which the concrete set underwater that endure today, this technology was lost after the fall of Rome and it wasn’t until the middle of the 19th century that it was rediscovered and came back into use, and even then it took quite a while to get it right, with some buildings as late as the 1930s deteriorating rapidly due to ill-advised “quick-setting” formulations of concrete.

My guess is that Mackintosh’s builders “chose unwisely” in the concrete they used.

If mankind can forget how to make cement, it makes one wonder how much other knowledge could be lost in a chaotic era? Cement is simple compared to electric power! Or what would happen to the computer era if we forgot how to prospect for Gallium? Specialization is essential to economic progress – but it carries its own risks.

Perhaps the saving grace today compared to Roman times is that technology is so much more widely disseminated around the globe. One of my unwritten novels involves a future in which technologically-advanced Brazilians explore a re-primitivized Europe seeking minerals, bringing them into contact with the local hunter-gatherers there.

if we forgot how to prospect for Gallium?

There is no Gallium ore. It is mostly extracted in the process of making aluminum. 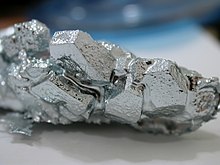 Gallium is a chemical element with the symbol Ga and atomic number 31. Discovered by French chemist Paul-Émile Lecoq de Boisbaudran in 1875, Gallium is in group 13 of the periodic table and is similar to the other metals of the group (aluminium, indium, and thallium). Elemental gallium is a soft, silvery metal in standard temperature and pressure. In its liquid state, it becomes silvery white. If too much force is applied, the gallium may fracture conchoidally. Since its discovery in 1875, gal...

There is no Gallium ore.

Consider the possibility that you might be missing the point!

Consider the possibility that you picked a bad example.

There are a fair number of technologies that have been effectively lost over the last 30 years.