World GDP in One Chart 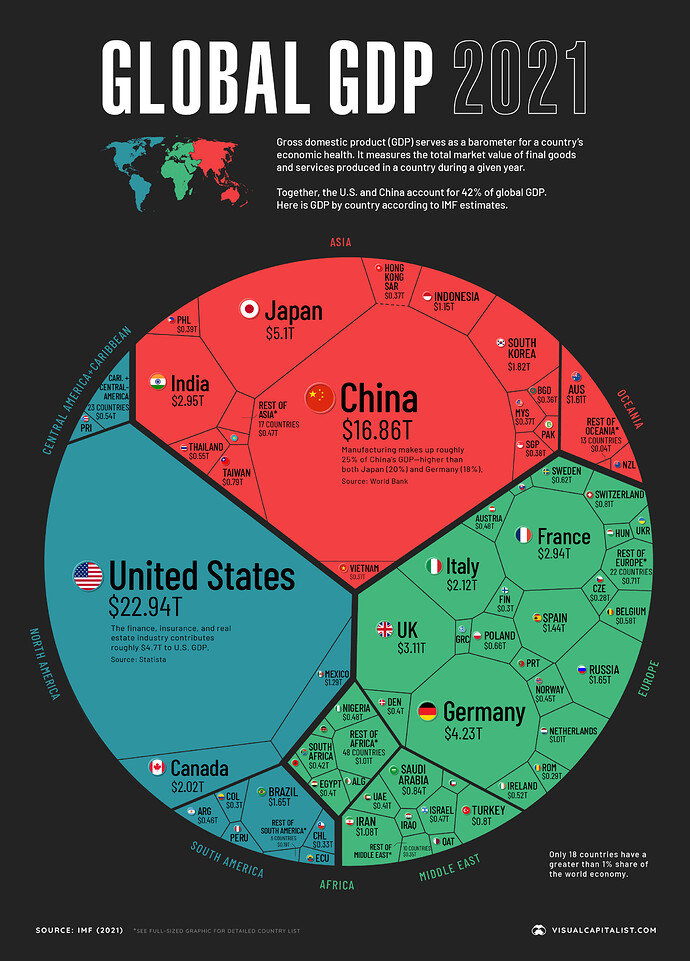 Visual Capitalist has published their 2021 world GDP update, “Visualizing the $94 Trillion World Economy in One Chart”, along with an expanded version of the chart that lists all of the countries that fell into the “Rest of” boxes on the summary chart.

“Once Pareto gets into your head, you’ll never get him out.”

One of the confusing things today is that so much “data” really fits into the category of “Accurate But Misleading”. The arithmetic is correct, but the implicit assumptions are highly questionable.

There is an interesting short book about GDP by Diane Coyle, “GDP: A brief but affectionate history”. There have been many arguments over the years about how to measure GDP. A lot of the measurement is consumption rather than production. Then there is the issue of arguably double counting actual production, such as when a government taxes the producers and then spends that tax revenue.

The take-away from her book is that reported GDP is a much more nebulous concept than the Authorities would like us to think. For example, of the $22.6 Trillion reported US GDP, around $10 Trillion is fairly unproductive money-shuffling FIRE (Finance, Insurance, Real Estate), Professional & Business Services (ie, a large element of non-productive compliance costs), and Government Expenditures (mostly the Paying Paul side of Robbing Peter). How much of that is genuinely productive?

We are driving the economy along making decisions by looking at the speedometer and the fuel gauge. What if those gauges are not telling us what we assume they are?

We are driving the economy along making decisions by looking at the speedometer and the fuel gauge. What if those gauges are not telling us what we assume they are?

And what if all of the levers and dials the “people in charge” use are not connected to the things they think they are, sometimes work in opposite directions, interact with one another in nonlinear ways, and have long and unknown delays before changes have their effects upon the system? Anybody who’s worked on an operating system knows this from experience. I suspect the “macroeconomics” clerisy hasn’t a clue and thinks their equations actually predict human action.

One thing that’s clear from the chart is that GDP, however defined, is a poor predictor of mind share among the political class (none of whom have ever worked on an operating system). For example, most of them seem to view Russia and China as peer adversaries. Look at the size of their economies. Heck, Taiwan is creeping up on Russia in GDP from a tiny little island with no natural resources.

It used to be simpler: look at production of steel, coal, etc. Today, intellectual capital and human capital appear to be more important. I’d bet on countries that are preserving their human capital rather than diluting it by open borders and mass immigration from less cognitively endowed populations.