Arianespace plans to launch their third Ariane 5 mission of 2022 on 2022-12-13 at 20:30 UTC. The launch, from the European Space Centre in French Guiana, will carry three payloads: the Meteosat Third Generation I-1 weather satellite for EUMETSAT and the Galaxy 35 and 36 communication satellites for Intelsat. All satellites will be placed in geostationary transfer orbits, using their own propulsion to arrive at their service longitudes in the geostationary band.

Ariane 5 is primarily designed to launch two geostationary satellites in each flight. In this case, the two Intelsat Galaxy satellites are stacked as the first payload and the Meteosat is the second payload within the SYLDA enclosure. On 2022-10-06, the previous two Galaxy satellites, 33 and 34, were launched by SpaceX on a Falcon 9.

Here is a pre-launch preview from Everyday Astronaut . 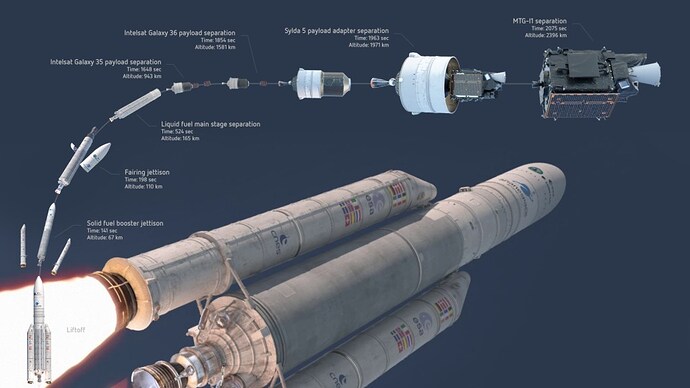