SpaceX is planning to launch a Falcon 9 rocket from Space Launch Complex 40 at Cape Canaveral at 23:07 UTC on 2022-10-06 to place two Intelsat communication satellites, Galaxy 33 and Galaxy 34, into geostationary transfer orbit for eventual service in the 129° and 133° West geostationary slots to provide C-band broadcast television service to North America.

The Falcon 9 booster, B1060, will be making its fourteenth flight after a turnaround of 111 days since its last mission and will land on an offshore drone ship. If successful in landing, it will join B1058 as the fleet leader with 14 launches and landings.

Weather is forecast as 90% favourable for launch. There is a 67 minute launch window for this date.

The countdown was cut-off at around 30 seconds before launch for an unspecified reason. Although there was a 67 minute launch window, apparently whatever caused the cut-off was such that they didn’t think they could recycle for a launch later in the window and the Webcast ended a few minutes later.

The launch, payload deployment, and booster landing were completely successful. I have cued the replay video to start one minute before liftoff.

This was one of those dusk launches where the rocket flies into sunlight as it rises above the Earth, illuminating the exhaust plume from its engines. Starting at 18:53 in the video, you can see a shot from the drone ship waiting for the first stage to return that shows a view back to the launch site toward the west with the plume from the second stage ascending into the sky. Later, at the landing at 22:20, you can see that the plume is dispersing as the second stage has passed out of the frame at the top.

Michael Seeley of WeReportSpace.com caught the Falcon 9 carrying Intelsat 33 and 34 as it flew in front of the almost-full Moon on its way to orbit. 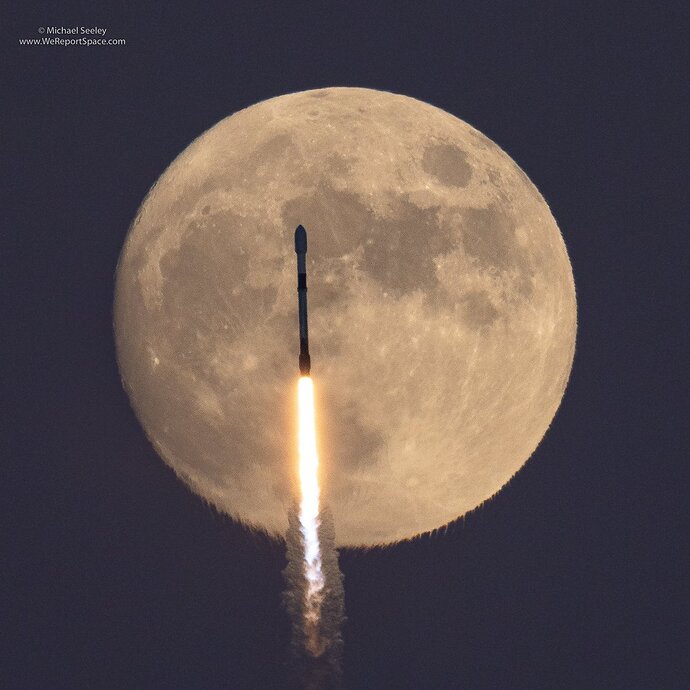 SpaceX have released the full time-lapse video of the Galaxy 33/34 launch taken from the drone ship. The second stage plume is amazing, and you can clearly see the first stage’s re-entry burn before it appears to land.

This is from six years ago, but I saw it today for the first time: a 360° view of a Falcon 9 landing from the drone ship. Use your mouse, click, hold, and drag to “look up” to see the booster coming down, then follow it to landing.

I especially like the Giant Sky Cobra hooding up.