On Monday, 2022-08-22, NASA held the Flight Readiness Review for the Artemis I test flight to lunar orbit, approving launch in a window that opens at 12:33 UTC on 2022-08-29. This is the press conference held after completion of the review with all of the NASA senior managers involved.

This flight, without a crew, carries a dummy motor in the Launch Abort System, so if something goes wrong in the first three minutes of the flight the mannequins on board the Orion capsule will have a really bad day.

I will use comments in the post for updates as the launch attempt approaches.

Jonathan McDowell has put together a page of details of the SLS/Orion vehicle and a detailed timeline, to the second, of the nominal mission: “Artemis I Launch”.

One thing that struck me is, in describing the Orion capsule:

The launch abort system for this thing, which is used only in the case of a booster failure in the first three minutes of flight, and is jettisoned at the 3:19 minute mark after launch, to fall into the Atlantic with the wreckage sinking to the bottom, weighs seven tonnes. The entire SpaceX Crew Dragon, including its “trunk” service module, integrated and reusable launch escape system, and the maximum payload is just 12 tonnes.

Both Orion and Crew Dragon support a crew of four, although Orion has the ability fly autonomously for much longer than Crew Dragon, which is designed to spend most of its time docked to the International Space Station.

If yesterday’s post, “SpaceX and T-Mobile Announce Direct Starlink to Mobile Phone Service”, provided a glimpse of the future, NASA’s 2022-08-26 “Artemis I Exploration Industry Partners Briefing” was a blast from the past.

Here, representatives of legacy aerospace contractors Aerojet Rocketdyne, Boeing, Jacobs NASA Enterprise Solutions, Lockheed Martin, Northrop Grumman, and Airbus touted their companies’ contributions to “sustainable” access to deep space with a rocket the NASA Inspector General has estimated will cost US$ 4.1 billion per launch, “a price tag that strikes us as unsustainable”, citing the “very poor” performance of the contractors on stage here. Several of the panelists emphasised that their contributions to the project were “built in all fifty states and multiple foreign countries”, spreading that yummy pork far and wide, and that they expected to keep their snouts in the trough continue to support human expansion into the solar system for the thirty year estimated duration of the Space Launch System (SLS) project. That’s thirty years into the future, not counting the 17 years the SLS has been under development (if you count its very similar ancestor, Ares V), without ever flying.

On 2022-08-27, two days before the planned launch, NASA held a Mission Managers Briefing and press conference with:

In response to a question from Irene Klotz of Aviation Week at 33:25, Mike Sarafin said that based on a probabilistic risk assessment the estimated loss of vehicle risk was 1 in 125.

Here is Scott Manley’s look at the SLS/Orion configuration for the Artemis I mission and a preview of events planned for the flight.

The countdown for the launch of Artemis 1 is now underway. Here is a launch day minus one countdown status briefing by Jeff Spaulding, Artemis I senior NASA test director and Melody Lovin, weather officer, Space Launch Delta 45.

Spaulding described the lightning strikes yesterday, including some on the lightning protection towers near the launch pad and said that no damage was done. 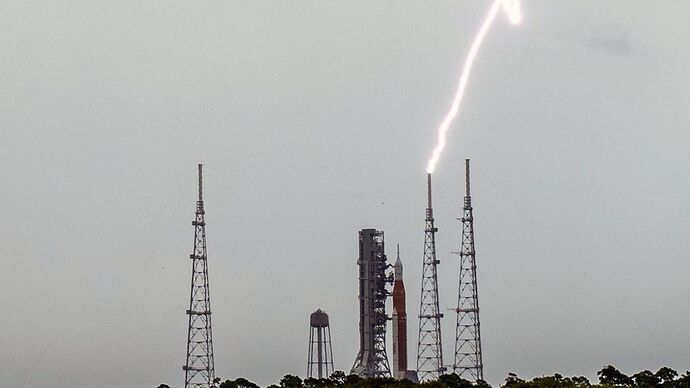