Genetically “uplifted” dogs with human-level intelligence figure in a number of science fiction stories such as Travis J. I. Corcoran’s Aristillus novels and L. Neil Smith’s North American Confederacy series (okay, a coyote, not a domesticated dog). But is it possible, and how might it be done?

On 2022-09-25, Payton E. Pearson III published a paper on Figshare, “Artificially Selecting for Intelligence in Dogs to Produce Human-Level IQ within 100 Generations” (you can read the full text at the link or download a PDF of the paper) exploring the feasibility of producing dogs with human-level intelligence purely by selective breeding. Here is the abstract.

Artificial selection is a well-known phenomenon of selecting for certain physiological characteristics of various species of plants and animals, and it is something that human beings have been doing for thousands of years. A perfect example of this is the union and development of dogs under human stewardship since the beginning of the agricultural era of society. In that time, approximately 6,000 years, dogs have been artificially selected in such a way as to produce thousands of different breeds. From the stout Dachshund, a dog breed produced for the purpose of hunting den-dwelling animals, to the highly intelligent Border Collies who were bred to help sheep herders herd their flocks; the many different canine breeds have served humanity in a multitude of capacities for many generations. In this paper, using the concept of artificial selection, it is determined with mathematical and statistical evidence how humans could artificially select for canine intelligence to such a degree as to produce canines with human levels of intelligence within a relatively short amount of time—600 years.

It is well-known that not only is artificial selection possible, but very powerful. That being said, what if humans were to take this concept to its absolute extreme, and in a direction that has more or less never truly been broached in any significant manner? To some degree, various dog breeds have been bred for increased levels of intelligence, such as the Border Collie, or the German Shepherd, but never have they been bred to produce levels of intelligence that would approach perhaps tens of times higher capacities than a typical pet. If one were to roughly compare the extent to which Border Collies have had their intelligence improved, it equates to a dog with the intelligence of a three-year-old child, or about 40% more intelligent than an average dog—which is to say that an average Border Collie can be considered a genius of the dog world; this means they would equate to a human with an IQ of 140 or higher on average.

Regarding Border Collies, it is noted that:

The Border Collie dog breed, which will be the main focus of this experimental design, was bred from other more standard dog breeds, reaching its unique breed statistics and characteristics within only a few hundred years. It is surmised, in fact, that the Border Collie breed has only been in existence since approximately the 1890’s, and that all modern-day Border Collies can have their lineages traced back to one canine in particular—a one “Old Hemp.” 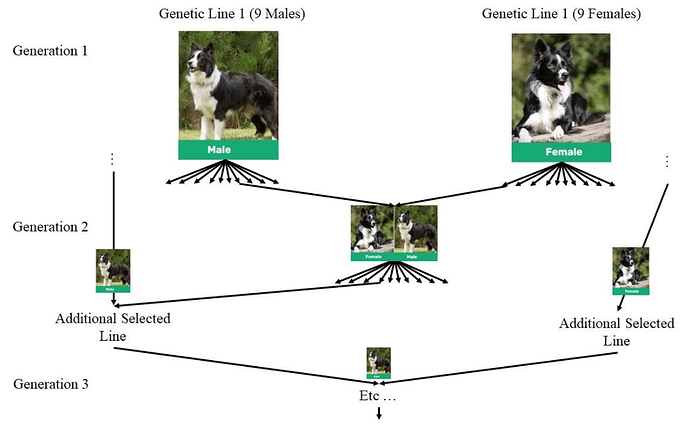 But do dogs have the mental hardware to become as intelligent as humans? Considering the Flynn effect among humans,

This is to say, an increase in cohort intelligence does not necessitate an increase in overall cranial volume, but rather an increase in the density of the brain matter itself. This is exemplified well in the brains of highly intelligent birds, such as crows or ravens. These birds have brains that, on average, are approximately the size of a walnut, but have a level of intelligence that is roughly on the order of that of a seven-year-old human. A modern-day canine has a brain volume that is several times this, though is only a fraction as powerful. Then, beyond this, the parts of the cerebral cortex that are over-or underemphasized also play a part. Dolphins, for example, are believed to be the second most intelligent species on planet Earth, after humans. Their brains, though slightly more massive on average than that of a human, have evolved in a different way, where they seem to have overdeveloped prefrontal cortices, rather than simply an oversized brain in general. To be even more specific than the cerebral cortex being the portion of the brain dedicated to higher level thinking, the prefrontal cortex is known to be the seat of reason.

For thousands of years, canines have been exalted in human society, hailed as “man’s best friend,” and for a multitude of very good reasons. Canines, without a shadow of a doubt, have been responsible for more human lives saved than can be counted, providing love, compassion, companionship, friendship, loyalty, and much, much more to many a human soul in desperate and dire need. Humanity would be remiss if we did not reciprocate the canine’s immense and positive impact on our civilization by building them the same capacity, so that they may develop accordingly. In our gratitude, simply put, canines more than deserve to have society and intelligence of their own, and they will have it in due time. We will make sure of it.

Why inflict higher intelligence on a entity without opposable thumbs? Bipedallity? 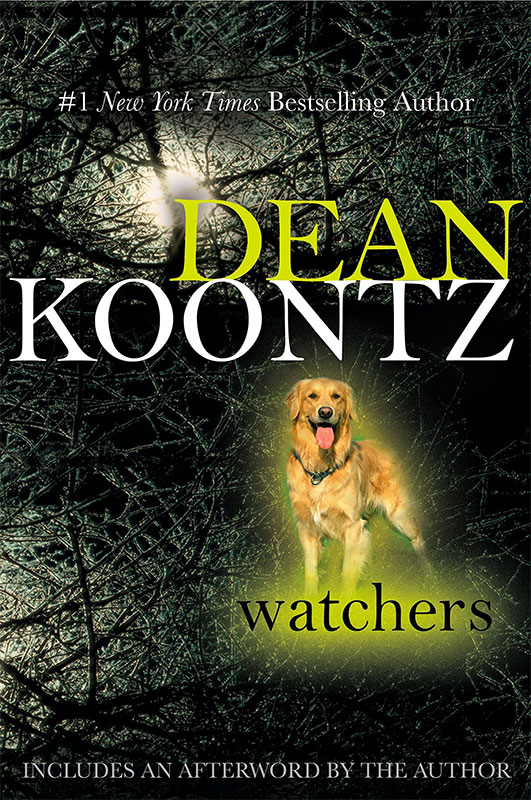 From a top secret government laboratory come two genetically altered life forms. . . One is a magnificent dog of astonishing intelligence. The other, a hybrid monster of a brutally violent nature. Both are on the loose… Bestselling author Dean Koontz...

This was my first thought as well. How frustrating would it be to understand without the ability to speak and act effectively?

canines more than deserve to have society and intelligence of their own, and they will have it in due time. We will make sure of it.

This is a little creepy. The author maybe isn’t 100 percent mentally stable.

At least they would know they are one step ahead of the junior senator from Pennsylvania.

I have known several dogs who appeared to be aware of their lack of opposable thumbs.

My parents’ dog would struggle to grasp a bone between his paws and draw the open end of the bone along the floor toward his snout. Giving up, he would take the bone to a person and tap the person’s hand with the bone so that the person would hold the bone for him.

Why inflict higher intelligence on a entity without opposable thumbs?

This is Travis Corcoran’s (author of the Aristillus novels) Twitter profile. 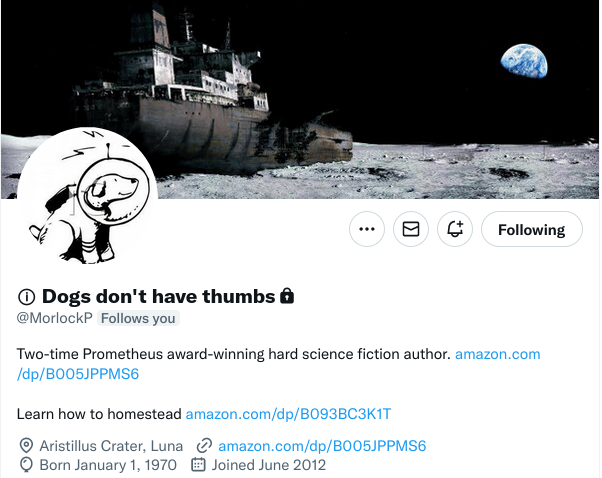 In both his novels and L. Neil Smith’s North American Confederacy series, uplifted species which lack the vocal tract to speak use an auxiliary speaking apparatus which is controlled by the mind. In Aristillus, many of the Dogs make their living by programming, which they can do by mind control, just like the telepathically typing monkey in the Neuralink Show and Tell.

The back-story of the Dogs of Aristillus is told in the short story “The Team”; here is my review.

Something apparently happened in primate evolution – probably at the time of the earliest nocternal predators involving the visual cortex – that decoupled neuron size from brain size. This is what made it possible for the primate line to increase the number of neurons with the total body scale. The use of fire then broke through the energy barrier to increase the number of energy-hungry neurons in humans along with the size of the brain to body mass ratio.

I am skeptical that dogs have this kind of neuron scaling, despite coevolution with humans, fire and cooked meat. It may be necessary to identify the genes responsible so as to directly edit the germline since the path taken by primates was pretty idiosyncratic.

Personally, I’d prefer it if we could reserve the biosphere for the kind of environment in which humans and wolves evolved symbiosis as individualistic men cast out from their human hunting packs because they were so “disagreeable”, and found themselves needing a lower-calorie hunting pack that wouldn’t just eat them as they competed for the megafauna scraps left behind by the human hunting packs. These individualistic men are sometimes called “sigma males” and I’m almost certainly one.

Mutual hunt between two sigma males in nature over winter calories is about as good a selection criterion for eugenics – including intelligence – as I can think of for compatibility with the biosphere.

Errr… and us multi-sigma out females?

If one were to roughly compare the extent to which Border Collies have had their intelligence improved, it equates to a dog with the intelligence of a three-year-old child

This is exemplified well in the brains of highly intelligent birds, such as crows or ravens. These birds have brains that, on average, are approximately the size of a walnut, but have a level of intelligence that is roughly on the order of that of a seven-year-old human. 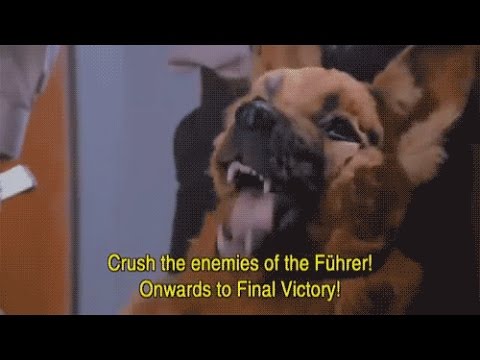 Wouldn’t that depend on the individual crow?

While studying for my BA in Film and Digital Media Critical Studies Concentration at the University of Santa Cruz Division of the Arts we spent an entire semester deconstructing the narrative of Danger 5 in order to understand why so many of us felt a continual sense of micro-aggression from the german shepherd lead character. At first we felt the dog’s residence in The Uncanny Valley could be remedied with better special effects, thereby placing it alongside such cinematic classics as Ghostbusters: Answer the Call. In the final analysis, we came to understand that the producers were a bunch of neo-Nazis attempting to compensate for their tiny penises by making fun of us.

Low hanging fruit is easy to pick, it’s even possible to learn to jump, but building ladders and climbing trees make for quite a barrier.

Thou shall not extrapolate linearly.