The British pound is down more than 2.5% on the day, trading at US$1.0965 and close to parity with the Swiss franc. Not an auspicious start for a new king and prime minister. This is an acceleration of the slide that began in May, 2021 when the pound traded for around US$1.40.

When Tony Blair took over, UK oil production was around 2.8 million barrels a day. It’s now down to about 0.8 million. 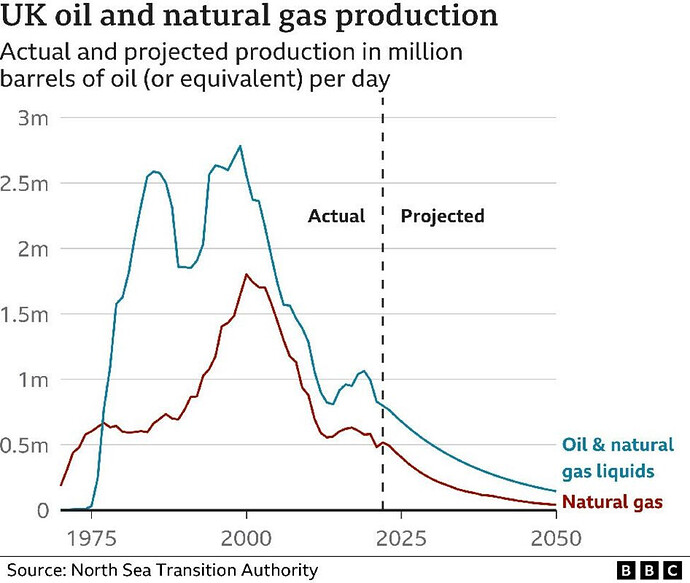 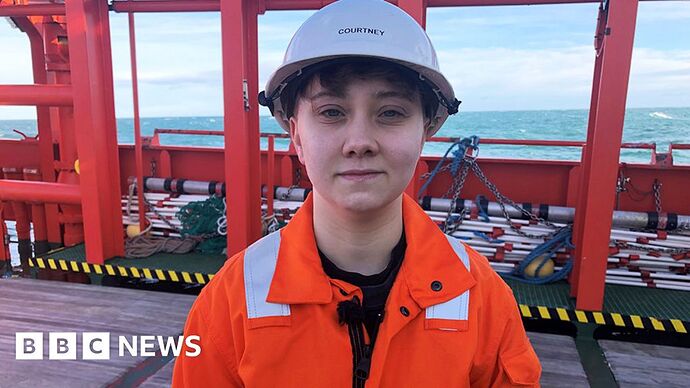 The changing face of the North Sea oil industry

Some workers are still banking on a career in oil and gas, others are focusing on a greener future.

The difference is about $60 billion per year. The gas revenue may be more, given the gas spoke, but let’s just assume the same for a total of $120 billion a year. Even without a multiplier, that’s a lot of activity lost.

Of course, production could have increased like in Norway:
https://www.spglobal.com/commodityinsights/PlattsContent/_assets/_images/latest-news/dec3d718-3905-46bf-bed1-6094d53e6a9d.svg

Following Russia's invasion of Ukraine, S&P Global Commodity Insights looks at the impacts on commodity and energy markets in the region and the world at large.

Considering the rather small size of the UK economy, it is surprising that 12.8% of foreign exchange trading involves the Pound Sterling. Maybe it is those speculators again?

I think it is expressed in percentage of all trades. Thus the numbers would total 200%.

Thus the numbers would total 200%.

That is correct. Every foreign exchange trade involves a currency pair, so when you sum the percentages in all transactions, it comes to 200%. Thus, the 88.3% share for the US$ indicates that it is on one or the other side of a large majority of transactions, as so much international trade (especially petroleum and LNG) is settled in dollars.

Thanks for the explanation. That is still rather surprising – about one quarter of international financial transactions do NOT involve any of the US Dollar, the Euro, the Yen or the Pound.

one quarter of international financial transactions do NOT involve any of the US Dollar, the Euro, the Yen or the Pound

An astute observation. When I consider what is the most likely (of the many possible) means of final dissolution of the erstwhile united States, I think loss of reserve currency status of the USD heads the list. I don’t understand the kinetics of this likely event - i.e. whether it comes about incrementally of we wake up one morning to the fait accompli.

I don’t understand the kinetics of this likely event

For what it is worth (Absolutely Nothing!), my guess is that the process would take time. When exporters from Germany to China decide no longer to accept dubious $ IOUs for their exports to the US, US imports of real goods & services will contract substantially. Empty shelves in Walmart and (worse) unrepairable BMWs because of the absence of spare parts.

What happens after the US Trade Balance equalizes down to what can be purchased with US exports is the hard question. Good outcome would be that the US starts on the quarter-century process of shrinking Big Government and rebuilding our manufacturing capabilities. Bad outcome – civil disruptions.

Again, my understanding is limited, but what could happen suddenly is absence of buyers of US government debt and consequent sudden-ish inability of the feds to continue the unprecedented debt-fueled bribery of its many client groups. Dollars, after all, are the only units of measurement of the loyalty and adhesion of these various actors. Talk about intersectionality!

Not sure about that. The “independent” Federal Reserve has always proved willing to “buy” US Federal Government debt, if no reasonable person wants to take that risk. My understanding is limited, but the process is basically that the Fed, as buyer of last resort, prints US Dollars and gives them to BigGov in exchange for any unsold BigGov debt instruments. Hence inflation, as the supply of dollars goes up while the supply of real goods & services does not.

Because everyone who holds US BigGov debt has an interest in extend & pretend, the probability is that it will take some time for the system to collapse. After all, we have been doing this for decades now, and judging by political adverts for the upcoming Congressional elections, financial mismanagement is even lower on the list of concerns than the prospect of thermonuclear war over the Ukraine.

The British pound flash crashed to 1.0373 US$/GBP overnight before recovering to around 1.08, still below Friday’s close. The low was a level not seen since 1971, shortly after the decimalisation of British currency. 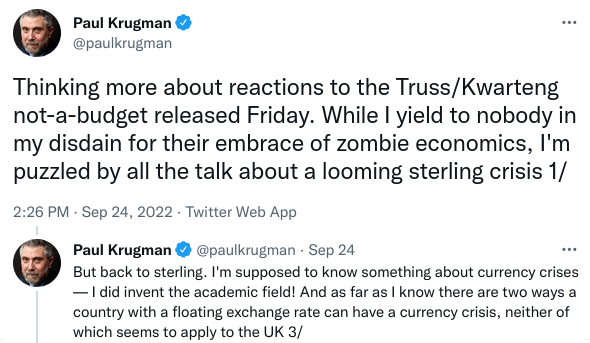 It couldn’t be that historically unprecedented money printing leads to depreciation of the currency being printed. Why, that would contradict theory!

My book contracts with Osprey are written in poulds. This hrirts In the spring the exchange rate was $1.35 per pound. Now it is $1.09.

Will the Nobel committee ask for the prize to be sent back? Can they do a charge back? 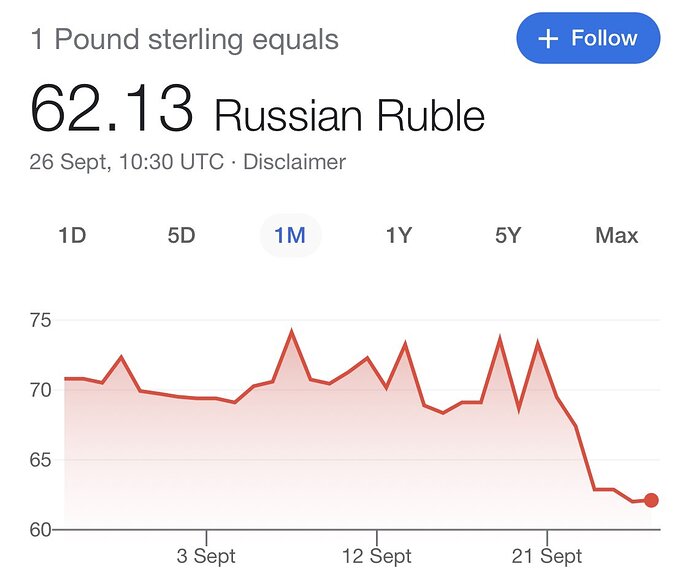 @
Forget the dollar, the pound is tanking against the ruble:

As of the close of U.S. markets (but recall the foreign exchange markets operate around the globe) the GBP/US$ exchange rate was 1.0683, down 1.5% on the day (but well above its overnight flash crash low). The other big news (another multi-sigma event) was the US 10 year Treasury bond closing at an interest rate of 3.8780, up 4.9% on the day. 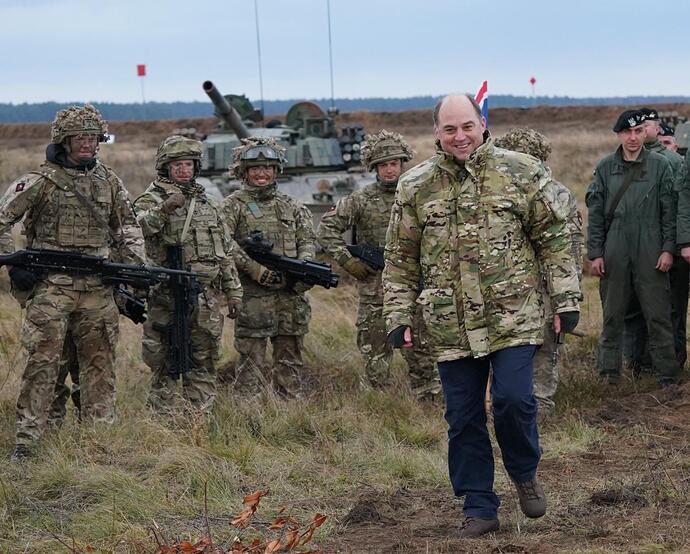 Analysts question whether the Ministry of Defence could even spend the amount of extra money envisioned by the Truss government.

Maybe we can make a deal. We can double the size of their army by sending them the new IRS adds

sending them the new IRS adds

Good point. The original plan for those new “IRS” agents called for them to be weapons-proficient.