Two years ago, I wrote a long post on the now-retired Ratburger site titled “Charting the Narrative” in which I discussed, among other research, a study done by Prod. David Rozado of Otago Polytechnic in New Zealand, which studied the prevalence of “social justice” related terms in all articles published in the New York Times between 1970 and 2018. Ratburger may be no more, but I have resurrected that post as a comment here, “Charting the Narrative”, so if you didn’t read it the first time around or have forgotten the content, you can re-read it before proceeding with this article.

Now, Prof. Rozado is back with another “big data” social science research project, “Themes in Academic Literature: Prejudice and Social Justice”, published in the Summer 2022 issue of the journal Academic Questions.

In this work, he uses the Semantic Scholar Open Research Corpus (SSORC) which, as of 2020, contains abstracts and metadata for more than 175 million papers across a wide variety of academic fields.

Here, for example are charts of yearly prevalence of a variety of terms in 175 million abstracts from the corpus. 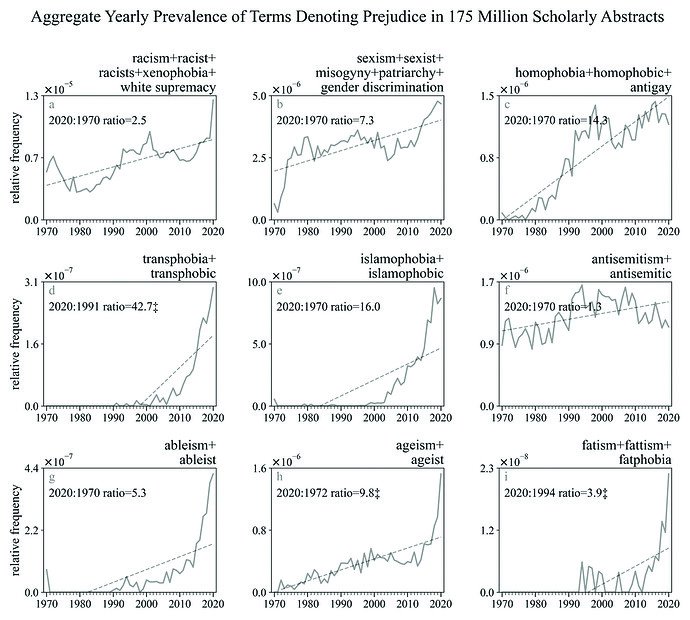 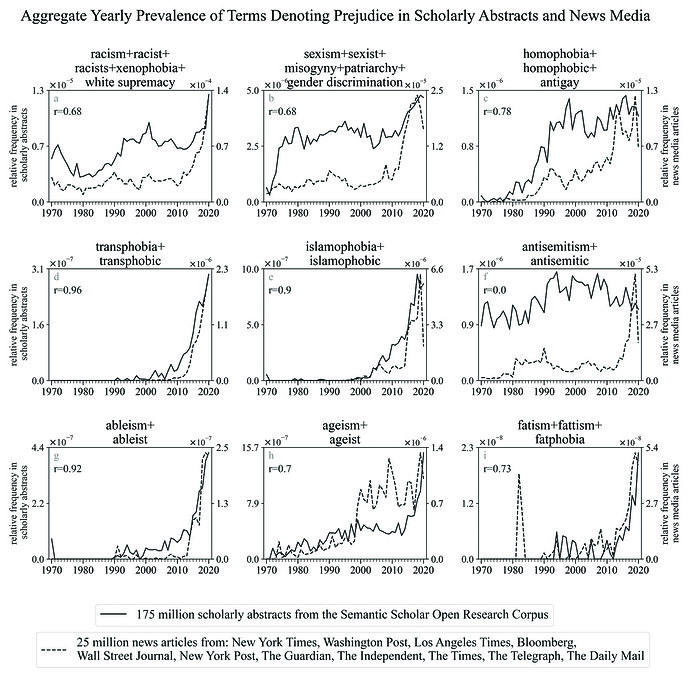 Often, terms denoting a new prejudice type appear to emerge first in the academic literature and then spread to news media. Such is the case in the 1970s for the prejudice types of homophobia and ageism. Similar dynamics occur for Islamophobia, ableism, and transphobia in later years. Fatphobia however displays the opposite dynamic, with pioneering occurrence happening first in news media and emergence in the academic literature happening afterwards.

Here is a plot of the frequency of social justice terms in the 175 million scholarly abstracts. 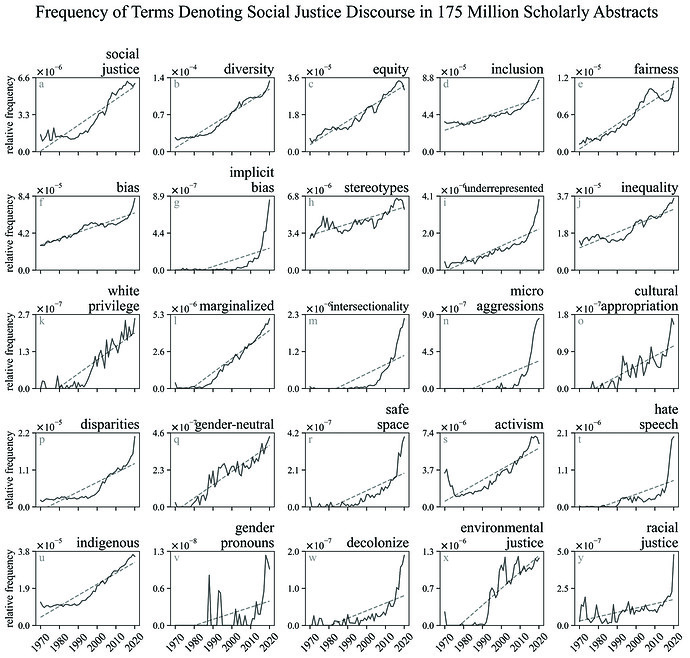 To conclude, our results suggest that the prevalence in the academic literature of terms denoting prejudice and social justice discourse has been growing steadily and diffusely since the 1980s but that such prevalence accelerated abruptly after 2010. Furthermore, the overall increasing prevalence in academic content since the 1980s until 2010 of terms denoting prejudice and social justice discourse is largely not mirrored in news media content. However, the abrupt increase in the prevalence of such terms post-2010 is apparent in both academic and news media content, but it is more acute in news media.

Interestingly, news media usage of terms denoting prejudice is predictive of the usage of such terms in academic content in subsequent years, which suggests that academics could be influenced in their choosing of research topics by the saliency of themes in news media. The relationship however appears complex, as for many prejudice types, words denoting new prejudice types seem to emerge first in academic content and spread afterwards to news media content. Future studies should try to quantify whether the trend of increasing usage of terms denoting prejudice and social justice discourse in academic and news media content has also spread to other influential social institutions such as political parties, think tanks, supranational organizations or the entertainment industry.

Indeed…there is much to be discovered from forensic analysis of the origin and dissemination of the Narrative through the institutions which have been captured by and used to promote the social justice agenda. We are fortunate to live in a time where database and computing resources permit research on such a huge body of text.