Does Electrical Energy Flow through Wires?

Remember where the vector is Poynting!

One can get into almost unlimited trouble with interpretations of the Poynting vector, especially when matter is also involved. Don’t forget that, in this case, there wouldn’t be flow of energy without the matter. This Poynting vector does not represent a radiation field.

Simple-minded question from a person who happily admits that he misses the aether: if the power is actually transmitted outside the wire, then why does the diameter of the wire matter? Why do we need thicker wires to transmit larger amounts of power?

You neglected to factor in Maxwell’s Silver Hammer.

Why do we need thicker wires to transmit larger amounts of power?

The penetration of the electromagnetic field surrounding a current-carrying wire into the conductor causes resistive losses within the conductive material. Increasing the size of the conductor reduces the current density within it, allowing it to carry more current.

With alternating current, things become more complicated due to skin effect. Because the current is reversing direction regularly, the time the field has to penetrate into the conductor is limited and most current flows near the surface. While strongly influencing the design of devices that operate at radio or microwave frequencies, the effect is significant even for 50/60 Hz electrical power. At 50 Hz, 63% of the current will flow in a region just 9.2 millimetres from the surface of the conductor, and a larger cylindrical wire will not conduct any more current. This is why large current installations use flat “bus bars” as conductors instead of round wires. Here is the primary three phase feed at Fourmilab’s quarter megawatt power substation. 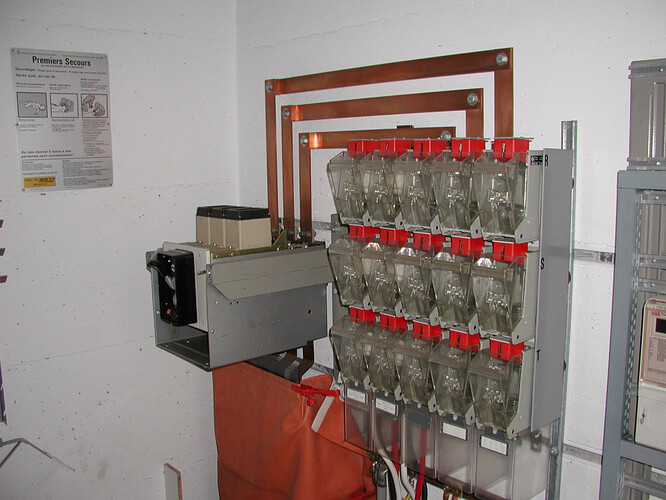 The aluminum cladding can be more corrosion resistant, too. Is that why it’s chosen?

The main reason is that aluminium has less than a third the electrical resistance of iron. Copper would be even better, but much more expensive.

I get the intrinsic conductivity ranking, but for outdoor conductors, like high tension lines, isn’t corrosion a large issue?

Sure, but even if you could prevent corrosion by painting the wire or some other method, the power losses due to iron’s higher resistance would still make it more expensive than using the aluminium cladding to carry most of the current.

John, this will probably sound dumb. But …

If the current is traveling out side of the wire then why can we hold the insulation (what need of it) and be safe ?

Is it the insulation keeps the outside current from being grounded by the core ?

If so this is a mind twister.

If the current is traveling outside of the wire then why can we hold the insulation (what need of it) and be safe ?

It is the transfer of energy being outside the wire that allows electrical transformers to work. If you place a wire and load next to another wire carrying an AC current, the fluctuating field outside that wire will induce a current in the second wire, delivering current to the load connected to it, even if there is no connection between the wires and they are separated by air or vacuum. Transformers often use an iron core, but this is simply to improve efficiency: air gapped transformers are often used in high frequency circuits. This electromagnetic induction is distinct from electromagnetic radiation such as light or radio waves, and occurs only when one conductor is directly within a fluctuating electromagnetic field: it does not involve a self-propagating wave in space.

Increasing the size of the conductor reduces the current density within it, allowing it to carry more current.

Thank you. That makes sense. But I am still confused about the video claim that the energy was transmitted outside the wire. If so, then why is there current density inside the wire? To be fair to the video presenter, he did make it plain that what he was saying was somewhat controversial.

My apologies for being so slow. The transmission of energy through a wire – or through a vacuum – is one of those realities that we all happily accept unquestioningly … until we stop and think about it! This is a mysterious universe.

But I am still confused about the video claim that the energy was transmitted outside the wire. If so, then why is there current density inside the wire?

The transmission of energy through a wire – or through a vacuum – is one of those realities that we all happily accept unquestioningly … until we stop and think about it!

This stuff is all very subtle. James Clerk Maxwell, who wrote down the first version of the equations that explain it all, did not grasp all of their implications and half a century later people were still discovering new phenomena predicted by them and their technological applications.

So a side question.

Internet using your homes electrical wires. Is the data traveling in the electromagnetic field outside the conductor or through the conductor ?

This method seems like it would cause lots of problems with data. Any elaboration on this method (+ -) would be welcome.

Internet using your home’s electrical wires. Is the data traveling in the electromagnetic field outside the conductor or through the conductor?

The energy carrying the signal is travelling outside the conductor, as always, but its amplitude is very small compared to the power sent through the wire and its frequency is very high compared to the 50/60 Hz power line, so the distance at which it is significant is small: it probably would be hard to detect outside the insulation of the cable. So, unless you have wires in closer contact with one another than is probably permitted by the electrical code, there would be no interference between signals or with other equipment.

That said, when I experimented with some of that gear years ago, I saw things that “shouldn’t happen”. For example, my upstairs is fed from a different phase pair than the downstairs, but I saw a weak signal coming through from a sender downstairs to a receiver upstairs. My guess is that this is due to there being 380 V three phase appliances such as the washer, dryer, and stove being wired into all three phases and their internal circuits creating sufficient cross-coupling to transmit the signal across separate phase pairs. I never confirmed that this was actually happening, because the “power line network” worked so poorly I quickly abandoned it.

This stuff is all very subtle.

Indeed! Thank you very much for your patient explanations. This is a highly educational site, and much appreciated! Now, about the aether …

I vote for the aether. I bet if you could talk to God he would say “Yea. The eather is a better idea. I was on a tight timeline so you got things like action at a distance instead”.

I vote for the aether.

If Stephen Wolfram’s ideas that underlie the Wolfram Physics Project and described in his book A Project to Find the Fundamental Theory of Physics are correct, there is a level of structure below what our present theories describe, with space and time emergent from a much simpler hypergraph mechanism driven by a simple rule. This would be remarkably similar to Michael Faraday’s concept of the æther, but with a much simpler underlying mechanism.

EEVblog has done an in-depth (45 minute) analysis of the video in the original post from an engineer’s perspective on electric circuits.

He concludes that the original video is correct in its analysis and the physics of electromagnetism, but notes that this isn’t the way engineers think about things, in particular direct current (DC) circuits. He notes that even Richard Feynman said that while one can analyse DC circuits using the Poynting vector (which points into the conductor from outside), this doesn’t provide any additional insight over the intuitive model based on current flow.

The problem in the video is then re-analysed using a lumped component model of an infinite transmission line, demonstrating that the delay between closing the switch and current flowing through the load depends upon the separation of the conductors connected to them and the inductive coupling of the fields generated by the transient after the switch is closed.

There’s nothing wrong with the analysis in the original video, but EEVblog argues it’s how physicists interpret the phenomenon, while engineers look at it in a different, equally correct, way.