Musk’s initiative to take over Twitter, a tool of the U.S. intelligence community (IC, a.k.a. deep state spies), has clearly put a mark on him – similar to mark Schumer put on Trump.

Schumer stated in January of 2017, “Let me tell you. You take on the Intelligence Community, they have six ways from Sunday at getting back at you.”

Deep state spies were able to contribute to the removal of Trump – but will their luck run out with Musk? Musk has allies in higher places (whether that be Big Tech executives or the SpaceX Starlink space based internet network). Time will tell. 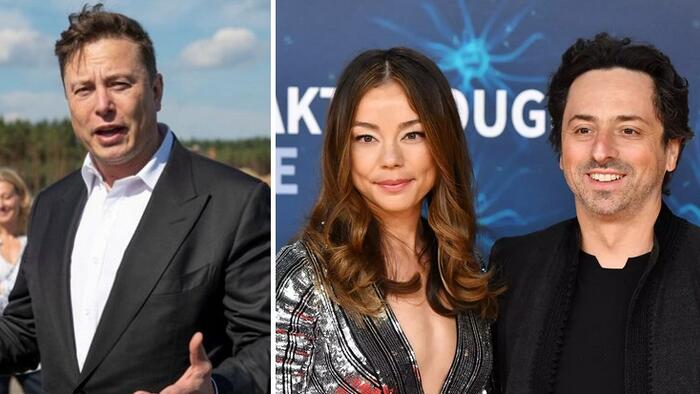 This was to be expected, especially given the source. 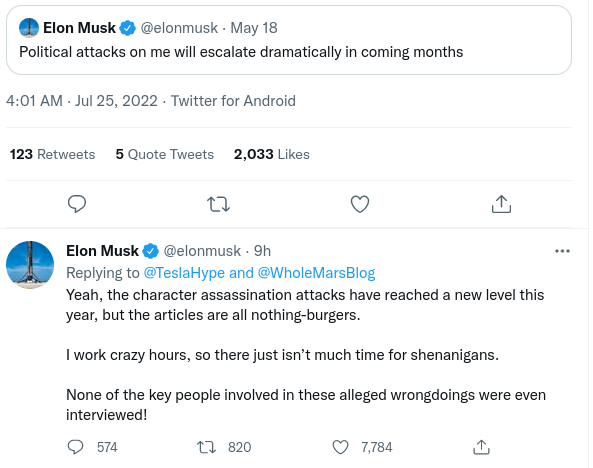 Unlike its editorial page, which often affects an entrepreneurial and libertarian outlook, the newsroom staff and their editors at the Wall Street Journal (WSJ) are thoroughly converged and have been for a long time. There is a long tradition of hit pieces on companies, individuals, and products which they perceive as disruptive to their constituency, which is the largest financial and industrial corporations and their allies in the regulatory and deep state. This was highly visible during the personal computer revolution of the 1970s and 1980s, the roll-out of mass access to the Internet, development of digital media and streaming services, and the first wave of private space initiatives in the 1980s.

I was a victim of this myself, savaged along with my company on the front page of the WSJ on 1992-05-28 in a piece titled “Tech Shop: ‘Theocracy of Hackers’ Rules Autodesk Inc., A Strangely Run Firm — Can the Latest CEO Survive A Cabal of Programmers Who Send `Flame Mail’? — A Most Unusual Interview” which remains, thirty years after publication, behind an adamantine Dow Jones subscriber wall (little help?).

The reporter was G[regory] Pascal Zachary, who had a well-developed reputation in Silicon Valley for, in the words of Autodesk’s public relations firm, “ripping companies to shreds”, especially those involved with innovative and disruptive technologies. After the interview and subsequent publication, I made the following collage which I suppose would be called a “meme” today. 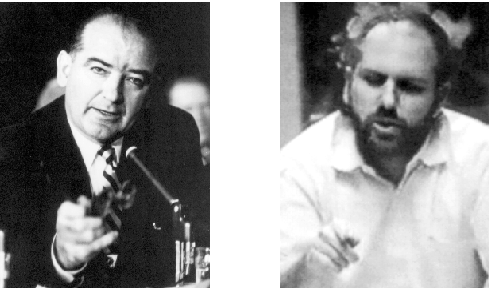 I recorded the entire interview and included a transcription of it and the audio of the recording in a chapter of The Autodesk File titled “Reporter at Work”, which explains the background to the attack, presents the interview, and then deconstructs the published article quoting as much as I thought I could get away under the doctrine of fair use.

Any betting/prediction market sites have a line on Musk’s next wife? I found a few posts with static predictions from a while back, but nothing dynamic.

I was a victim of this myself,

After reading The Autodesk File, I concluded that this “strangely run firm” stands as a stellar example of how a tech startup ought to be run. In effect, it is a prescription for how to bring out the best from everyone and guide them toward the same goals. I tell any business friends who will listen they should read it; that it ought to be required reading in MBA programs. I don’t know to what extent Musk follows the same principles, but I suspect he uses some of them, based on his successes.

This resistance toward innovation, I have come to believe, is an inherent part of the modern state: it hates successful competition, by which its continual failures may be measured. It is institutional jealousy - often perpetrated by the state’s media arms - writ large.

This resistance toward innovation, I have come to believe, is an inherent part of the modern state: it hates successful competition

In The Network State, the author discusses “three cycles” which organisations of all kinds: states, companies, religions, political movements, etc. tend to follow over time.

We are now at the point where the once-radical leftists who have taken over the administrative state, media, and large corporations have become the ruling class and see those who dissent from their shared collection of sacred nostrums as the enemy and work together to destroy them.

Theocracy of Hackers would look good on a T-shirt 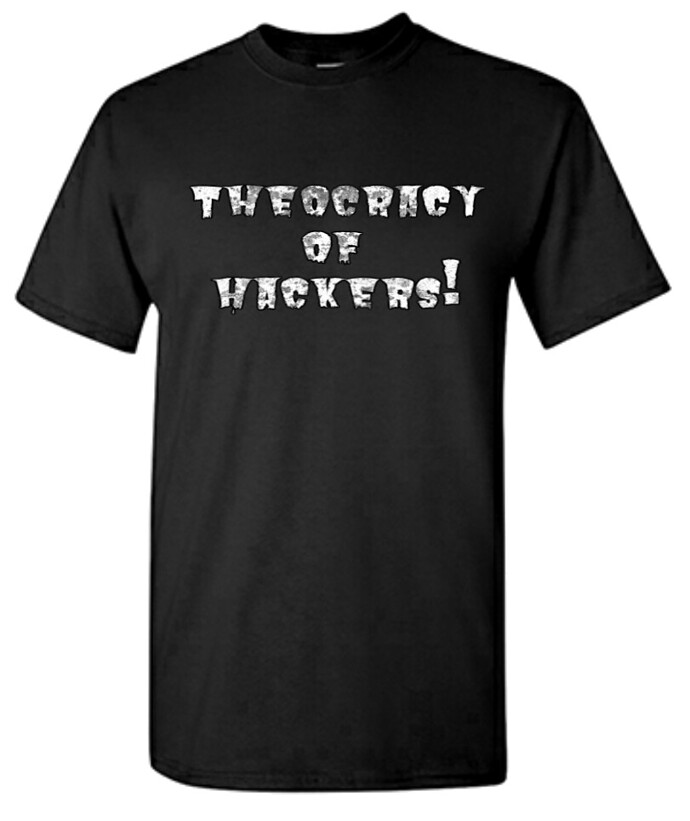 Is there some trove of simple-to-code cellular automata libraries that use these cycles (and let you code your own)?

Here’s Machiavelli’s thoughts about this same topic, more than half a millennium ago (1513):

As the human race increased, the necessity for uniting themselves for defence made itself felt; the better to attain this object, they chose the strongest and most courageous from amongst themselves and placed him at their head, promising to obey him. Thence they began to know the good and the honest, and to distinguish them from the bad and vicious; for seeing a man injure his benefactor aroused at once two sentiments in every heart, hatred against the ingrate and love for the benefactor. They blamed the first, and on the contrary honored those the more who showed themselves grateful, for each felt that he in turn might be subject to a like wrong; and to prevent similar evils, they set to work to make laws, and to institute punishments for those who contravened them. Such was the origin of justice. This caused them, when they had afterwards to choose a prince, neither to look to the strongest nor bravest, but to the wisest and most just. But when they began to make sovereignty hereditary and non-elective, the children quickly degenerated from their fathers; and, so far from trying to equal their virtues, they considered that a prince had nothing else to do than to excel all the rest in luxury, indulgence, and every other variety of pleasure. The prince consequently soon drew upon himself the general hatred. An object of hatred, he naturally felt fear; fear in turn dictated to him precautions and wrongs, and thus tyranny quickly developed itself. Such were the beginning and causes of disorders, conspiracies, and plots against the sovereigns, set on foot, not by the feeble and timid, but by those citizens who, surpassing the others in grandeur of soul, in wealth, and in courage, could not submit to the outrages and excesses of their princes.

Under such powerful leaders the masses armed themselves against the tyrant, and, after having rid themselves of him, submitted to these chiefs as their liberators. These, abhorring the very name of prince, constituted themselves a new government; and at first, bearing in mind the past tyranny, they governed in strict accordance with the laws which they had established themselves; preferring public interests to their own, and to administer and protect with greatest care both public and private affairs. The children succeeded their fathers, and ignorant of the changes of fortune, having never experienced its reverses, and indisposed to remain content with this civil equality, they in turn gave themselves up to cupidity, ambition, libertinage, and violence, and soon caused the aristocratic government to degenerate into an oligarchic tyranny, regardless of all civil rights. They soon, however, experienced the same fate as the first tyrant; the people, disgusted with their government, placed themselves at the command of whoever was willing to attack them, and this disposition soon produced an avenger, who was sufficiently well seconded to destroy them. The memory of the prince and the wrongs committed by him being still fresh in their minds, and having overthrown the oligarchy, the people were not willing to return to the government of a prince. A popular government was therefore resolved upon, and it was so organized that the authority should not again fall into the hands of a prince or a small number of nobles. And as all governments are at first looked up to with some degree of reverence, the popular state also maintained itself for a time, but which was never of long duration, and lasted generally only about as long as the generation that had established it; for it soon ran into that kind of license which inflicts injury upon public as well as private interests. Each individual only consulted his own passions, and a thousand acts of injustice were daily committed, so that, constrained by necessity, or directed by the counsels of some good man, or for the purpose of escaping from this anarchy, they returned anew to the government of a prince, and from this they generally lapsed again into anarchy, step by step, in the same manner and from the same causes as we have indicated.

Such is the circle which all republics are destined to run through.

(copied from Discourses of Niccolo Machiavelli. 1513 - and wishing someone translated the text into modern English, maybe using GPT-3)