Firefly Aerospace is planning to launch its second attempt at an orbital flight on 2022-09-30 in a launch window extending from 07;01 UTC until 09:00 UTC. The launch will be from Space Launch Complex 2 at Vandenberg Space Force Base in California, aiming for a 300 km circular orbit at 137° inclination. The payload is a number of cubesats and picosats with a total mass around 35 kg, many of them back-up copies of satellites lost in Firefly’s first orbital launch attempt on 2021-09-04 when failure of one of the first stage’s four Reaver engines caused the rocket to go all Kerbal around 145 seconds after launch.

This will be the third attempt to launch this rocket. The first, on 2022-09-11 cut off at one minute before launch due to a helium pressurisation problem. They tried again the next day, but scrubbed the launch an hour before the opening of the launch window due to weather. At that point, with unfavourable weather forecast for the next several days and then the Vandenberg range being occupied by other previously-scheduled launches for SpaceX and ULA, they stood down. Now that the range is available once again, they’re giving it another go.

Here is an earlier post on the first launch campaign, including a video of Firefly’s memorable first flight attempt in September 2021. We also have a conversation with Firefly co-founder Eric Salwan about the history of the company and its strategy for the future.

Here is a pre-flight preview from Everyday Astronaut .

This time they counted down to T−0, lit the engines, and immediately cut off. I have cued the replay video to start at one minute before ignition.

A backup launch opportunity was reserved on the range for to-morrow at the same time, but there has so far not been an announcement as to whether they’ll try again then.

Firefly have just announced they will try again to launch the Alpha rocket on 2022-10-01 in a launch window from 07:01 to 09:00 UTC. All other details of the flight are as given in the main post. Here is the Webcast for this launch attempt. 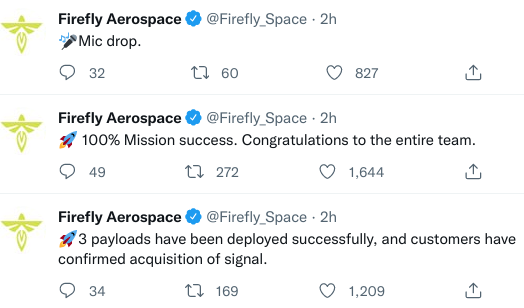 I have cued the replay video to start one minute before launch. At 2:45:40 in the video, a series of replays of the launch occur, without the video drop-out that occurred on the live feed. At 2:47:59 a view from the second stage after the circularisation burn has been done, showing the Earth below and the payloads on the dispenser. At 3:22:30, there is a replay of the circularisation burn, downlinked after the rocket was acquired by another ground station. This is followed by playback of payload deployment at 3:25:00.

What happens when you tweet “wide angle” to someone named Felix Schlang.