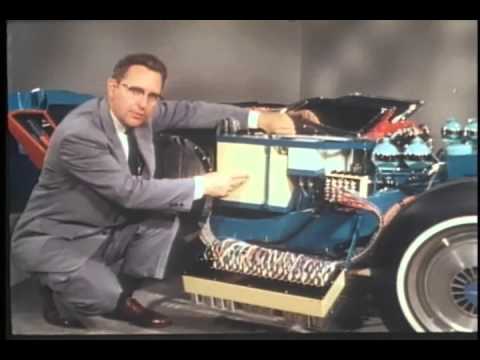 On 2022-05-06, we discussed General Motors’ 1956 Firebird II concept car, the company’s vision of the family car of the future, packed with engineering concepts such as turbine power, independent suspension, and disc brakes. Three years later, General Motors unveiled its successor, Firebird III, and this time they gave the stylists free rein. While Firebird II gave off a jet fighter vibe, Firebird III styling was more UFO influenced, complete with separate bubble cockpits worthy of a spaceship piloted by Kang and Kodos.

The turbine power plant was refined, and an auxiliary engine in front powered the accessories. Steering wheel and pedals were replaced by a “Unicontrol” joystick located on the centre console. A prototype automatic guidance system was installed that picked up signals from a cable embedded in the highway.

Firebird III was a fully driveable car, and it’s still running today. Here is Jay Leno taking it for a spin in 2018.

I wonder if Tesla made a car that looked like this there’d be any market for it.