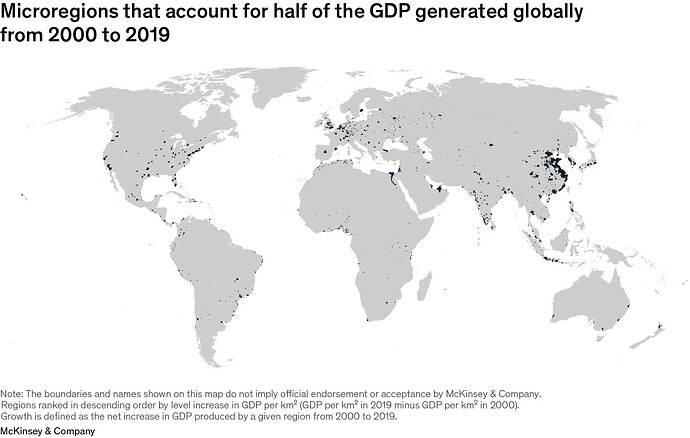 One thing about which I’ve been obsessed for decades has been the gap between quantities measured by aggregates—usually arithmetic means of a large body of individual measurements—and the reality of what is really going on that is captured by those measurements. In my 1988 paper “The New Technological Corporation”, I spoke of “quantum economics”, which I introduced by:

Modern physics tells us that reality resides not in aggregates but in discrete interactions and transformations the aggregates only dimly reflect. Economics, and the understanding of business built upon it, largely relies on interpretation of aggregates with continuous behaviour. These measures may reflect the behaviour of markets in which discrete transactions are the only reality no more than large number aggregates describe the underlying events of physics.

In my 1991 book, The Hacker’s Diet, in the “The Eat Watch” chapter, I began the description of the distinction between managing, fixing, and solving problems with:

I believe that our time is the age of the manager. The MBA degree, a credential that qualifies one to administer by analysing and manipulating financial aggregates, has become the most prized ticket to advancement in the United States. The values managers regard most highly: competence, professionalism, punctuality, and communication skills have been enshrined as the path to success and adopted by millions.

The cult of management, for that is what it is, pervades the culture which is its host. In time, it will be seen to be as naive as the ephemeral enthusiasms that preceded and will, undoubtedly, supplant it in due course. But now, at the height of its hold, it’s important to distinguish managing a problem from fixing it, for these are very different acts: one is a process, the other an event. Solving a problem often requires a bit of both.

On 2022-12-07, McKinsey Global Institute, a quintessential pillar of the Temple of Management, took a baby step toward the quantum economics view of the world in releasing “Pixels of Progress: A granular look at human development around the world”, subtitled: “Our world is big and complex, but human progress is still about life on the ground, up close and in detail.”—quantum economics! From the introduction:

In this new report, we share the findings from a new dataset that breaks the world down into more than 40,000 microregions, a view 230 times more granular than a country perspective. This pixelated version of the world, compiled with cutting-edge statistical techniques like the use of night-time satellite imagery, provides a much more nuanced view of development than previous research, enhancing our understanding of global progress in ways that can help business and governments make better, more targeted decisions.

The picture at the top of this post is from chapter 1, “Pixels make the picture: A guided tour through the granular world”. We’re forever hearing about “GDP growth” or “GDP per capita”, comparing entire countries, some of them railway-era, continental scale, resource-extraction empires, as if they were homogeneous units. Here is what McKinsey found when you zoom in.

Half of the additional GDP generated from 2000 to 2019 came out of 3,600 microregions from our total of 40,000 as ranked by the increase in GDP per square kilometer. While this economic growth was concentrated, it was geographically dispersed.

These 3,600 microregions were scattered across 130 countries yet cover just 0.9 percent of the world’s land mass—collectively the size of South Africa. Twenty-seven percent of the global population lived in them in 2019, totalling two billion people.

In China, high growth places such as Bao’an District in Shenzhen and Guangzhou and Dongguan in Guangdong were among these places. India and the United States were home to the next largest pool of microregions that were economic powerhouses. Microregions in countries as diverse as Romania, Brazil, Indonesia, and Nigeria contributed, too, for example, São Paulo, Brazil, and Bogor City, the sixth largest city in the Jakarta metropolitan area in Indonesia.

The patterns of population growth explain part of this concentration phenomenon: Half of the 1.5 billion people added to planet Earth from 2000 to 2019 lived on just 1.1 percent of its surface.

The following section, “Fighting the tyranny of averages” begins with a paragraph I could have written myself,

We typically think of prosperity and well-being by country because that is how statistics are commonly aggregated and reported. But this tyranny of averages prejudices our conclusions. That is, we often lump together all the people living in a country and regard all of them as having the same average GDP per capita or life expectancy. Our microregional lens doesn’t entirely resolve the tyranny—for example, a municipality is also an average of its neighborhoods—but it certainly provides a much more precise picture of development and reveals differences within countries, as the disappearing borders in the previous examples have demonstrated. Now we’ll turn to examples where national averages are misleading and show how our understanding shifts when we employ a microregional lens.

A subsequent section, “A new 80/20 rule”, illustrates my aphorism, “Once Pareto gets into your head, you’ll never get him out”, and notes:

Uneven economic prosperity and growth is the reality within many countries. As we have seen in this chapter, country averages, while useful indicators of overarching economic progress, obscure differences in microregional realities.

The increasing population concentration and increase within high-growth microregions also means that country-scale aggregates are misleading metrics of global population and income. The next chapter of the report, “A miracle of widespread progress: A 20-year journey of health and income” begins by noting:

By 2019 3.5 billion people, close to half of the world’s population, lived in microregions with living standards equivalent to the top 21 percent in 2000.

While it is generally known that humanity has progressed over the past two decades, our granular data reveals the true extent of that progress and where it took place. For one thing, almost half the world’s population in 2019 lived in places with living standards only attained by the top 21 percent in 2000. At the other end of the spectrum, the group of more than one billion people who lived in microregions with the lowest living standards at the beginning of the 20-year period had dwindled to a few hundred million by the end, despite increasing population.

As I inveighed more than three decades ago:

Aggregates aren’t reality
Reality is events, not a process.
Reality is discrete, not a continuum.

Certainly, prosperity & growth are not evenly distributed anywhere. That is the obvious evidence from our own eyes. The decline of small towns and the countryside is readily apparent in the US, Europe, and Russia. The basic thesis that growth is concentrated in cities – and limited numbers of cities at that – is clearly correct.

But are we being misled by what we can measure?

Notice that the prominent black dots on places like London, Los Angeles, Paris – places where people are likely to have concerns about such things as knife attacks & car burnings as indicators of social crumbling. GDP is a particularly contentious measurement, since the government that prints paper and hires massive numbers of unproductive bureaucrats can proudly report increased GDP.

Clearly, national averages are a very crude measure. So is GDP.

Notice that the prominent black dots on places like London, Los Angeles, Paris – places where people are likely to have concerns about such things as knife attacks & car burnings as indicators of social crumbling.

In 1973, J. Neil Schulman interviewed Robert A. Heinlein for three hours for an article in the New York Sunday News. In 1990, a transcript of the full interview was published as The Robert Heinlein Interview. In it, Heinlein, when asked about the conflict between high technology and personal liberty responded,

The question of how many mega-men [millions of population] it takes to maintain a high-technology society and how many mega-men it takes to produce oppressions simply through the complexity of the society is a matter I have never satisfactorily solved in my own mind. But I am quite sure that one works against the other, that it takes a large-ish population for a high technology, but if you get large populations human liberties are automatically restricted even if you don’t have legislation about it. In fact, the legislation in many cases is intended to—and sometimes does—lubricate the frictions that take place between people simply because they’re too close together.

This has been true for most of human history and almost everywhere around the globe: cities have been the site of most innovation and technological progress because of the network effect of having many people with a wide variety of talents and access to resources collected together in one place. But with that concentration comes the downside of concentrating too many creatures who evolved to live in small bands of fierce hunters and gatherers in one place. Until the public health developments of the 19th century, cities were net sinks of population: the mortality due to disease and other consequences of urban life required constant replenishment of the population from the countryside.

Perhaps now that we have global, high bandwidth, and essentially free communication, plus an increasing capability to fabricate physical objects without massive and capital-intensive factories, we can have the advantages of dense urbanisation without the physical concentration of population. If you believe, as Marx argues, that political organisation is downstream of economics and the means of production, perhaps this decentralisation will lead to the emergence of the Network State, as envisioned by the eponymous book.