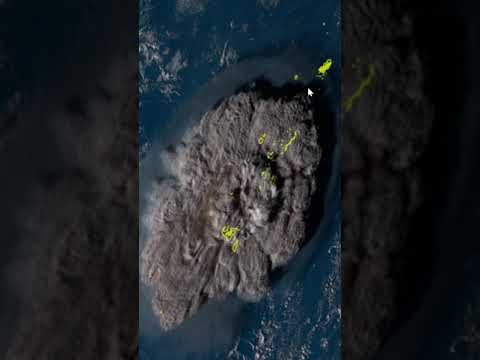 On 2022-01-15, the Hunga Tonga-Hunga Haʻapai undersea volcano in Tonga explosively erupted with around seven times the energy of its previous eruption on 2021-12-20, ejecting a cloud of water vapour and ash that grew to 150 km in diameter in less than one hour. The sound of the eruption was heard as far away as New Zealand. The imagery above is from the Japanese Himawari geostationary weather satellite. The eruption created a tsunami which measured 3.9 metres in Nuku’alofa, Tonga and flooded coastal areas.

The U.S. National Oceanic & Atmospheric Administration’s National Environmental Satellite Data and Information Service has has posted a page “Hunga Tonga-Hunga Ha’apai Erupts Again” showing this animated image of the eruption from the GOES West satellite as well as other images tracking dust and sulfur dioxide from the eruption as well as this global perspective from Japan’s Himawari-8.

The accompanying text notes that this is the first undersea volcano eruption to form a new island in 53 years, and hence the first to be observed by modern Earth observation satellites.

Here is another weather satellite image of the eruption, this from the Korea Meteorological Administration’s GK2A satellite. Frames in the image are ten minutes apart.

The image cannot be embedded: here is a link to view it on Twitter.

@DougMadory
Island nation of #Tonga is completely offline following a #tsunami triggered by a massive volcanic eruption in the Pacific Ocean. According to @kentikinc data, traffic volumes began to drop around 4:30 UTC (5:30pm local) before finally going to zero at 5:40 UTC (6:40pm local). 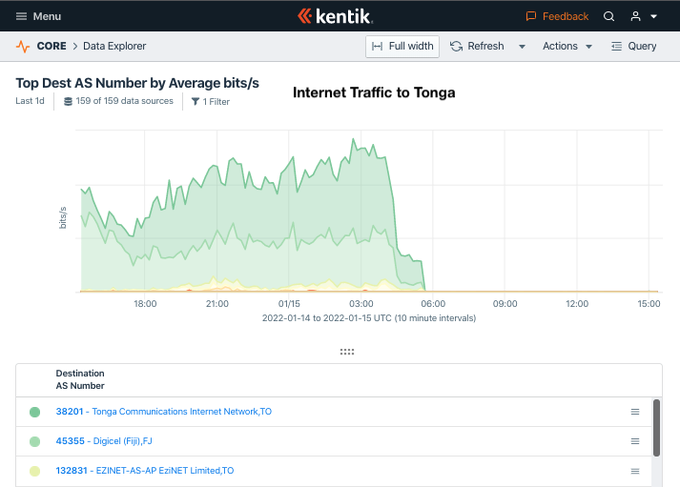 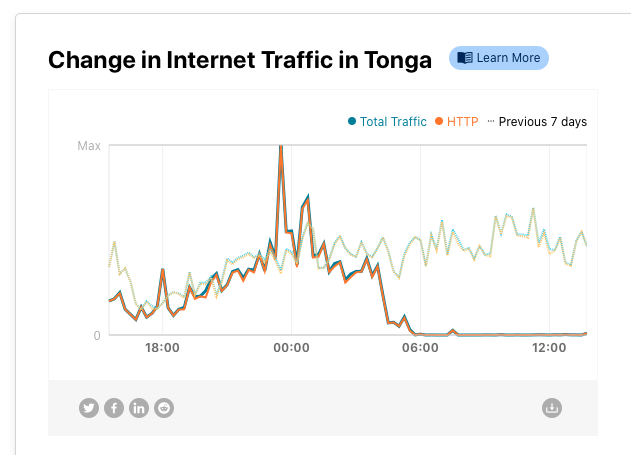 The Tonic.to domain registry and DNS servers (of which I was a founding investor) are not physically hosted in Tonga and were not affected by the outage.

You could track the sound wave provoked by the eruption in satellite imagery and in surface pressure traces. Below is Portland (Oregon) International’s pressure trace. The wave passed just after 12 GMT.

Below is Portland (Oregon) International’s pressure trace. The wave passed just after 12 GMT.

Wow! Makes me wish I had a precision recording barometer here on the other side of the world. Maybe we could have seen it coming around, and maybe more than once.

I tried to trace the pressure signal farther eastward, but it became progressively more difficult to see the signal. But, we can do a few back of the envelope calculations, because that’s what we do on Saturday nights.

The eruption appears to have occurred around 0400 GMT. The spike in pressure at PDX occurred at roughly 1230 GMT, 8.5 h later. It’s about 9000 km on the great circle between Tonga and PDX, yielding a speed of roughly 300 m/s. That’s a bit slow for a sound wave near the surface, but sound speed decreases with temperature. Assuming the adiabatic speed of sound, 300 m/s equates to a temperature of about -50C, or roughly tropopause temperature. That seems reasonable.

Scott Manley presents a compilation of satellite imagery, on-the scene photos, comparison of the islands over time, the tsunami coming ashore, lightning strike tracking, and stunning visualisations of the pressure wave passing over Japan and across the United States.

It may be obvious to you science gents, but it isn’t to me: will this eruption cause widespread climate effects like that eruption in the 19th century which resulted in snow in New England in June? Or like in 632 AD , where there are contemporary reports that after a large eruption the sun was veiled for a year?

And inky-dinkally, if/when the volcanic cloud spreads far and wide, isnt it gonna show even more clearly that we cannot realistically depend on solar power?

I know! Let’s send Greta Thunberg to yell at the volcano:
“ How DARE you!?!” That’ll teach it….

will this eruption cause widespread climate effects

A language purist would say that such effects from very large volcanic eruptions are weather effects rather than climate effects. The volcanic dust in the atmosphere causes changes in weather patterns for a year or two, after which the annual weather cycle resumes its normal variability. A weak analogy is to a plumb bob – set it swinging and it will swing for a while before returning to its prior stationary equilibrium.

A climate effect would be an Ice Age, of which the planet has had many, with presumably many more to come. That is when the weather patterns do not return to previous variability but change to a different equilibrium. What caused such genuine “climate change” is a good question, with a number of contested proposed answers. But we know there have been larger volcanic eruptions within historical times which have caused temporary weather effects but not long-term climate change.

If volcanic dust does cause a temporary cooling, maybe governments should pass laws to require everyone to leave their SUVs running all the time, to prevent the weather effects by generating more offsetting carbon dioxide? Just a suggestion!

I read that Yellowstone is a huge caldera and eruption is overdue and when it blows it will cut the continental US in half!
True?
And Gavin, yes, okay, the volcanic effect would just be a weather change, not “climate change”—but whatevs, it should cause us to rethink the getting rid of fossil fuels mantra. That doesn’t mean it will but it should. I don’t think I’ve ever seen volcanoes taken into account in any discussion about climate change, come to think of it.

And inky-dinkally, if/when the volcanic cloud spreads far and wide, isnt it gonna show even more clearly that we cannot realistically depend on solar power?

Large volcanic eruptions cause temporary decreases in global temperature largely due to dispersal of sulfates in the upper atmosphere. The very large eruption of Tambora in 1815 caused global cooling of 0.53° C. The size of volcano eruptions is characterised by the Volcanic Explosivity Index (VEI) which is a logarithmic measure of the volume of ejecta from the eruption. Tambora was a VEI-7 event, and such events are estimated as occurring every 500 to 1000 years.

This eruption is estimated to be a high VEI-5 event, which category occurs around every 12 years (with most being toward the low end of VEI-5, however). That is the category of Mt. St. Helens. The last VEI-6 event was Pinatubo in 1991. Even a VEI-7 event, however, would not dramatically decrease the power generated by photovoltaic panels, although local disruption (comparable to thick cloud cover) would occur downwind of the eruption until the plume dispersed. Pinatubo caused global cooling of around 0.4° C and beautiful sunsets for months, but no obvious decrease in solar intensity. The Tonga eruption is substantially smaller.

In terms of the Volcano Explosivity Index I mentioned in comment 12, the last Yellowstone caldera eruption in 630,000 B.C. was estimated to be VEI-8, releasing more than 1000 km³ of ejecta, or around 1000 times more than the Tonga volcano and ten times Tambora. Based upon ash deposits, the last Yellowstone super-eruption is estimated as having released 2,500 times as much ash as Mt. St. Helens.

Here is a tweet with an animated GIF of the pressure wave from the Tonga eruption crossing Germany, Switzerland, and Austria. For some reason animated GIFs from Twitter will not embed here.

The best part of these large volcanic events is the sunsets, which endure for many months. Pinatubo gave us some great ones in 1991-92. I don’t have any pictures of those but there are some nice ones of the Agung eruption of 1963 in Aden & Marjorie Meinel’s Sunsets, Twilights, and Evening Skies. If we’re lucky, this latest will also give us some good ones. Look to the west long after sunset (or east before sunrise if you’re an early riser). 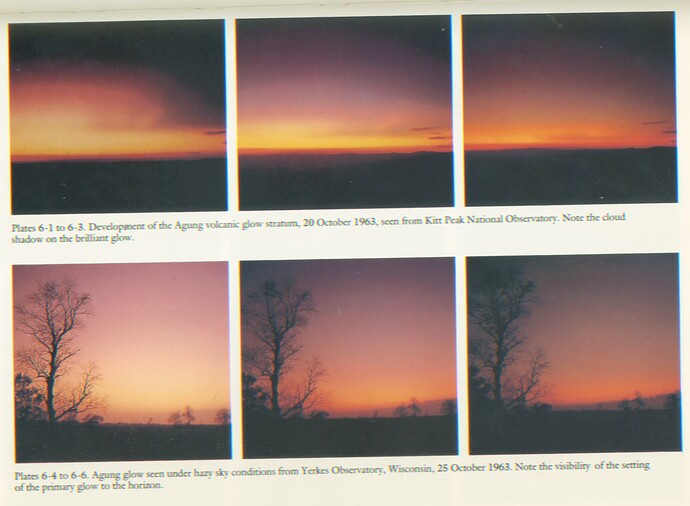 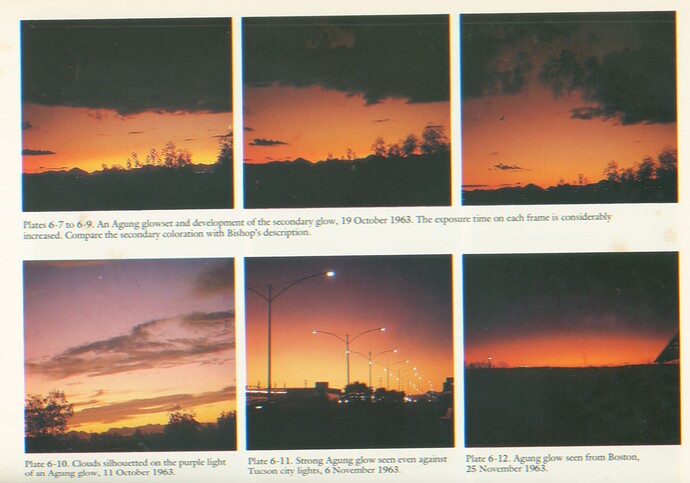 The time the glow lasts after sunset depends on the altitude of the volcanic stratum. This handy graph lets you find one from the other. 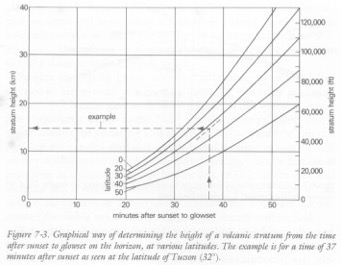 @Climatologist49
From the tide gauge at Kahului Harbor, Hawai'i, the sensor is just now seeing the pressure wave coming from the same direction as the volcano for the second time. A complete circumnavigation.

You could track the sound wave provoked by the eruption in satellite imagery and in surface pressure traces. Below is Portland (Oregon) International’s pressure trace. The wave passed just after 12 GMT. 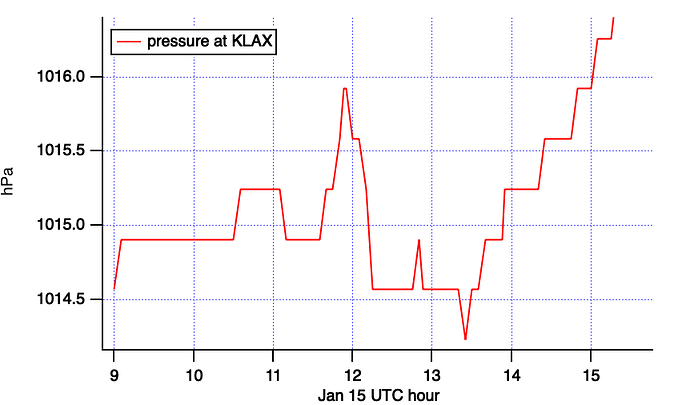 @tehoro
Graph over 2 days of pressure in Ōtaki, NZ, showing effects of the #Tonga #Volcano. 1st Wave was direct. 2nd Wave went via other side of the world. Then 1st came through again, also around the world. Lots of fluctuations. (Local weather is settled.) @MetService @metoffice 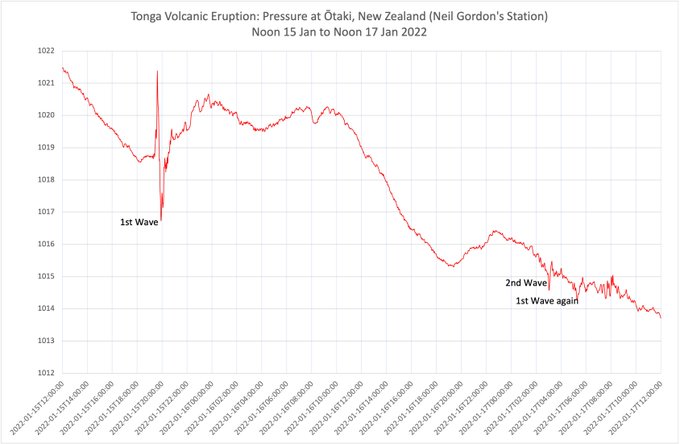 From New Zealand, the 1st Wave is the direct pressure spike arriving from Tonga. The 2nd Wave is the pressure wave arriving that went the long way around the world from the original event. This is followed by a spike from the first wave arriving after circumnavigating the globe.

Literally, a bang heard 'round the world.