I just can’t being myself to watch Bygone’s “soul of America” speech tonight. It’s starting about now. I don’t want to see that Sputnik standing in Independence hall, our Holy of Holies, he is NOT worthy. I know it will be lie after lie. If any of you dear polymaths are stalwart enough to watch, couldja, maybe, report here? Thanks🫣…

I did not watch. But I have just watched a few clips. With the proviso that I may not have seen a fair or representative sample, it remains that what I did see was unprecedented for a sitting President for a formal (not campaign) speech, was absolutely disgusting, and a bright line crossed. God damn him.

Hypatia – the normal process for handling that kind of travesty is to make it into a drinking game. Maybe, have a chug every time Biden* says “It’s all Trump’s fault”.

We have to keep a sense of perspective. In my area, his speech was pre-empted by a sports fixture. Priorities!

Hypatia – the normal process for handling that kind of travesty is to make it into a drinking game.

So, who did it better? V for Vendetta (bottom) or D for Dementia (top)? 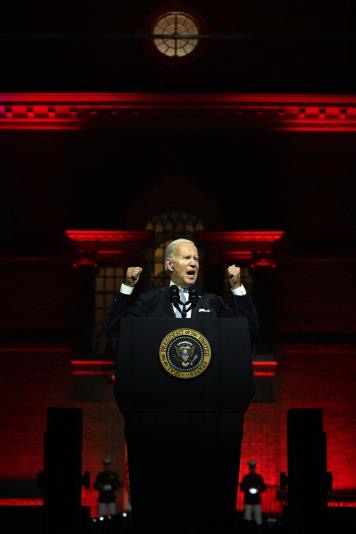 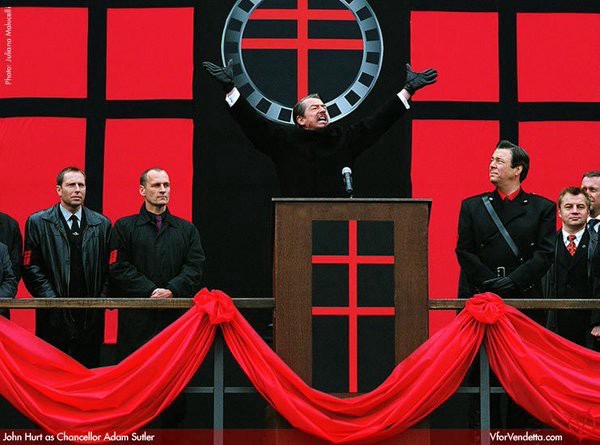 So, who did it better? 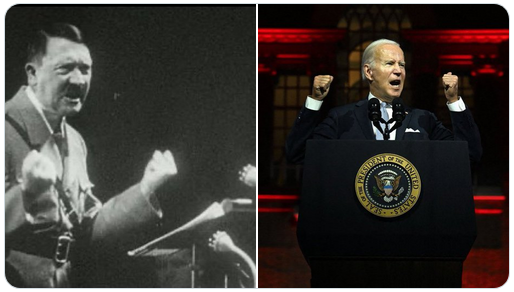 The speech only needs one change to be completely accurate, and that would be to properly title it, “Rally Cry of the Deep State Fascists”.

We shouldn’t be surprised. It’s not the first time Biden has plagerized another statesman’s speech.

Help me work sump’n out here:
classic revolutionary theory sez that in a democracy, the goal of terrorism is to provoke the government into repressive measures, which then turns the people against the government.

WTF do we have here?
our government seems to be purposefully goading the people into acts of terrorism, in order to be able to successfully demonize one large faction!
Yes they’ll take “repressive measures” they already HAVE, by holding the J6 protesters in solitary confinement awaiting trial for 9 months now. But We the People as a whole don’t seem too upset by that. We did, gloriously, exhibit a unified ,negative response to the proposed “bureau of Disinformation”, but so what: the Dems still have the collaboration and willing participation of the social media sites, and everybody knows it. Their only mistake was giving it a name. A gratifying number of us just couldn’t resist using that façade for target practice. That didn’t last long—and operation itself proceeds apace.*

We HAVE an increasingly repressive government that we all must fear unless we are willing to serve it in thought, word and deed. They have “six ways from Sunday” of destroying their opponents, remember?
But an increasing number of the People seem to like and accept that! Ol’Bygone’s poll numbers are, as they say on Powerline, “tumescent” now.
87,000 new, combat-trained IRS agents? Great! , policies designed to engineer rolling energy blackouts?Yay! Turning our nation into a polyglot holding pen? Hola!

I dunno. I reckon this is “American exceptionalism” at work. For the last time.

I have a prediction, maybe two:
There will be a political assassination ( no, an actual murder) in this country in the next month or so. I dk who the victim will be, R or D, and it doesn’t really matter, I mean in connection with the long-term goal of Dem-socialist hegemony.
Because we the Rightly-guided cannot take back the narrative. Why? Because like the Founders we hold certain truths to be “self-evident” . That means we have never thought they needed justification, and we have never developed arguments to support them.
Our first spectacular failure to even try was when confronted by radical Islam. Yuh, we were AFRAID to come out and say democracy is better—BETTER, than theocracy, which Islam advocated and spread by force from its inception.
And back to predictions: Unless the assassination victim is Trump, we will see him in manacles and shackles before the midterms.
Prove that I lie….

Yet another example of our side shooting ourselves in both feet: the migrant busses.
We complained, correctly, about the administration flying coveys of these invaders to small airports throughout the heartland in the dead of night. Now Gov Abbot is doing their work for them, in broad daylight, and all we see is the welcoming committee at Port Authority, all we hear is that luxury hotels at convenient midtown locations re being used to provide free housing for them. Why did we think was gonna happen, in a city that elected and re- elected DiBlasio ? The mayors of DC and Chicago will catch on soon enough—and all OUR side will have accomplished is facilitation of the invasion.

our government seems to be purposefully goading the people into acts of terrorism, in order to be able to successfully demonize one large faction!

Indeed. I sense a staged “insurrection” event, à la the FBI-led plot to kidnap Michigan Gov. Whitmer, in the near future. Then Ol’Bygone can say “I warned you about the MAGA threat, now we must mobilize against them”, similar to how Hitler blamed the Reichstag fire on communists in 1933.

Yuh, we were AFRAID to come out and say democracy is better

That is one take on the situation. Another take is that an increasing number of us realize that the combination of universal suffrage, loose election procedures, and a permanent Political Class is a non-workable form of “democracy”.

But we cannot realistically even get reliably-honest elections, let alone deprive millions of people who may be dead or stupid of their votes. And we certainly can’t get today’s Political Class to agree to changes which would prevent them from making a very rich life-long career out of being “elected”.

The system has to crash before there can be essential positive changes. We should be cheering on the kind of Political Class stupidity which accelerates the inevitable crash. Times are going to be very tough indeed during and after the crash – but the world two or three generations on will be a much better place.

And just like with the migrant busses, they masterfully co-opt and commandeer EVERYTHING we do which seems promising. See the WSJ today: “Joe Biden holds a Trump Rally”. He’s now turning himself into a caricature of trump. Will it work? Yes. It will please the AOC faction in his own party who didn’t think he was “angry “ enough. Lo, “He fights!” I hope I’m wrong but….I see no way we can win.

Well, yeah,and we’re famously not a democracy but a republic. But realization of our own imperfections should NOT have held us back from daring to deplore and criticize Islam, fundamentally and irredeemably our opposite in that in Islam, the church IS the state.
But even after they killed 3,000 of us, we blamed ourselves, we made excuses.
Well: 9/11 was a spectacular success. (Oh, yes! They managed to make it about persecution of them, there are at least 3 times as many mosques in the US —including at Ground Zero itself—as there were in 2000.) So— maybe there’s one thing all Americans still accept as a self-fulfilling truism: nothing succeeds like success.

CNN apparently realized the optics of this and reduced the intensity of the red background partway through Biden’s speech.

Watch the color change from red to pink in real-time: 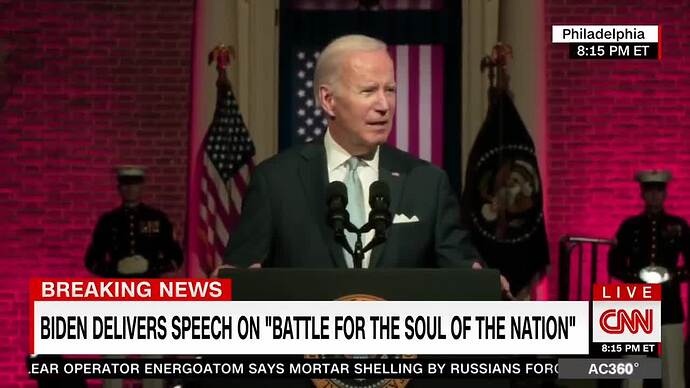 Tyrant Biden decided blood red was the perfect color for the background of his speech.

I wanted to verify this, so I went to the original CNN stream and found that the color change begins at about 12:40 and the background remains pink for the remainder of the speech. The same point in the speech starts at 13:13 on CBS’ stream, but there is no color change. I compare CNN with CBS below. 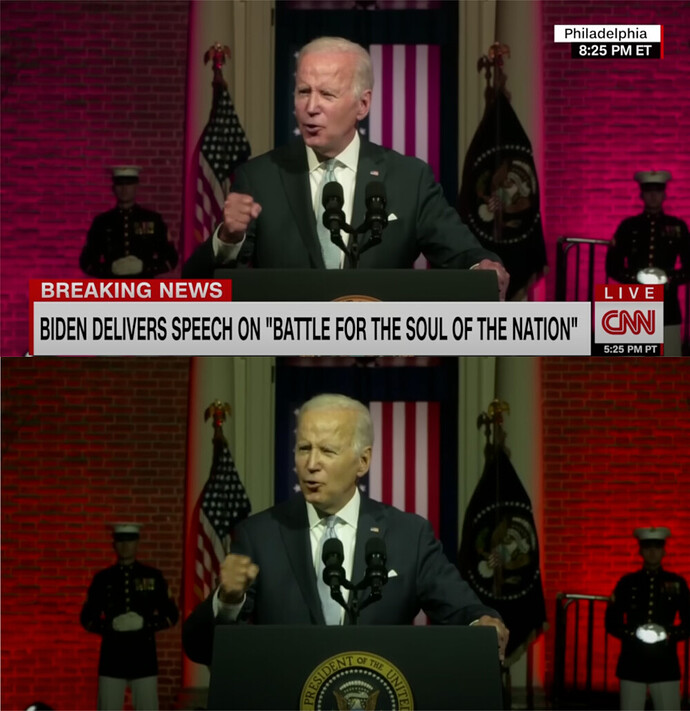 Pink,white and blue. That about sums it up.

We are effed. Let’s face it: when life gives the Dems lemons, they make lemonade. When it gives US lemons, we…just….SUCK.

So what’s new? Don’t get depressed, Hypatia. The US has been on the wrong track for multiple generations. There can be reasonable discussions about whether the rot started with Lincoln, or with Wilson, or with FDR. The degeneration has been accelerating in the 21st Century – obvious in the case of the despicable legal industry, the once-proud universities, and the formerly-admirable military.

But that is OK! First the inevitable Crash. Then, over the course of several succeeding generations, a new phoenix will rise from the ashes. We are privileged to be witnesses to history.

I want to believe, Gavin! But we DID see sump’n new in 2016, in my opinion. And it is being snuffed out.
Maybe you’re right, “t’was ever thus” ( which is what the Bible sez people will say in the last days, even as the signs continue to multiply…apologies, but, I can’t escape the eschatology into which I was indoctrinated as a child.)

Agreed! The change is that now the take-over by super-rich Democrat insiders and their running dogs in the bureaucracies is undeniable. Anyone who still believes we have government “of the people, by the people, for the people” is lying to himself. It is obvious that we no longer have the Rule of Law, or even competence in our rulers.

Recognizing the failures of Our Betters is an important step in pulling the Mandate of Heaven away from the buffoons who still think they are in charge.