Imitation is the sincerest form of flattery unless

Back in February of 2016, I posted my first ever Linkedin article: 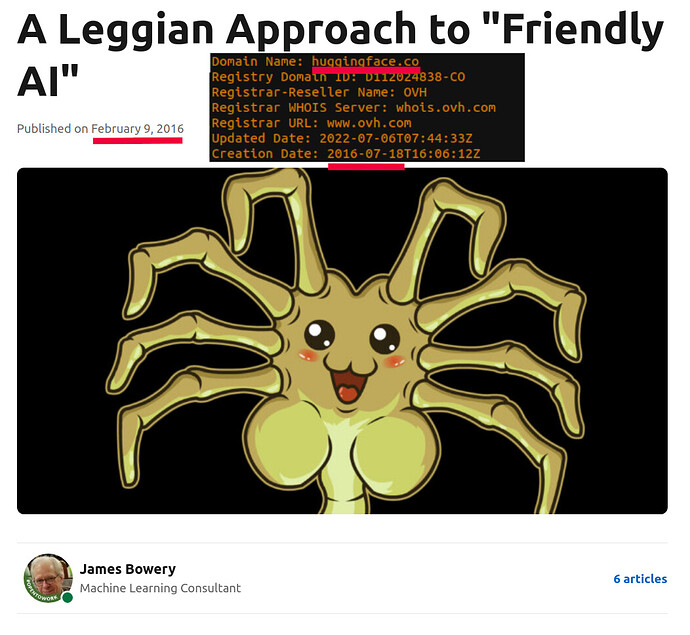 Now why would I be so self-flatteringly petty as to point out what is probably just flattering imitation?

Firstly – I’m not imagining that there is a substantial population of “influencers” who pay very quiet attention to stuff I’ve been saying – not all of them “friendly”. So I’m justified in suspecting the founders of huggingface.co are aware of what I’ve been saying about the Algorithmic Information Criterion for model selection as a means of fighting the theocracy’s bias that is increasingly being imposed on ML models as well as manifest in the social pseudo-sciences’ emphasis on “statistics” over AIC.

Secondly – these guys are raking it in on a huge network effect – and since I’ve been vocal about these network effects and their dangerous centralization of the benefits of positive externalities since my days at VIEWTRON, they must also be aware that I consider them to owe a kind of “debt to society” albeit a much smaller debt than the likes of Bill Gates, Jeff Bezos and Mark Zuckerberg.

Thirdly – Bill Gates, Jeff Bezos and Mark Zuckerberg, while they owe a much larger debt than minor network effect enterprises like huggingface.co, they not only are more distanced from Algorithmic Information Theory but are (precisely because they are so much bigger network effects) clearly infected by brain-hugging rentier mind parasites and therefore it is more understandable that they would not support anything like The Hutter Prize (preferring, for their philanthropy, much more subjective judging criteria so as to feed their brain-huggers with social status which is a form of private sector graft).

I could throw in kaggle.com as an intermediate case but a big part of their business model is directly antithetical toward unified models (e.g. macrosocial models) of causation. Each additional discrete model makes them money so they have no incentive to unify anything. They are probably simply part of the overall hysterical harvesting of “the low hanging fruits” of GPU hardware that gave rise to the bias toward statistical machine learning models – and they are floating serenely in the warm, soft, moist cesspool of rents, with brain-huggers swimming around in it, never having been bothered by any thinking about model selection prize criteria more rigorous than that typical of lesswrong.com essayists.

No, I’m pretty sure the guys founding huggingface.co are aware of their social debt and are aware of how to go about paying it in the form of underwriting objective criteria prizes for data models generated by a combination of human and machine intelligence. The Hutter Prize is a no-brainer for them to underwrite to at least a 10x greater magnitude, but they do nothing of the sort.

So what’s their excuse?