John Carmack Resigns from Meta/Facebook, “All In” on Building Artificial General Intelligence

John Carmack, founder of id Software and developer of games including Doom, Quake, and Wolfenstein 3D, later joined Oculus VR as Chief Technical Officer (CTO) to guide their virtual reality (VR) development and continued to work on virtual reality after Oculus was acquired by Facebook (later Meta) as Consulting CTO.

On 2022-12-16 Carmack resigned from Meta, posting the following statement on an internal Facebook message board. After it was leaked to the press, he made the statement public. 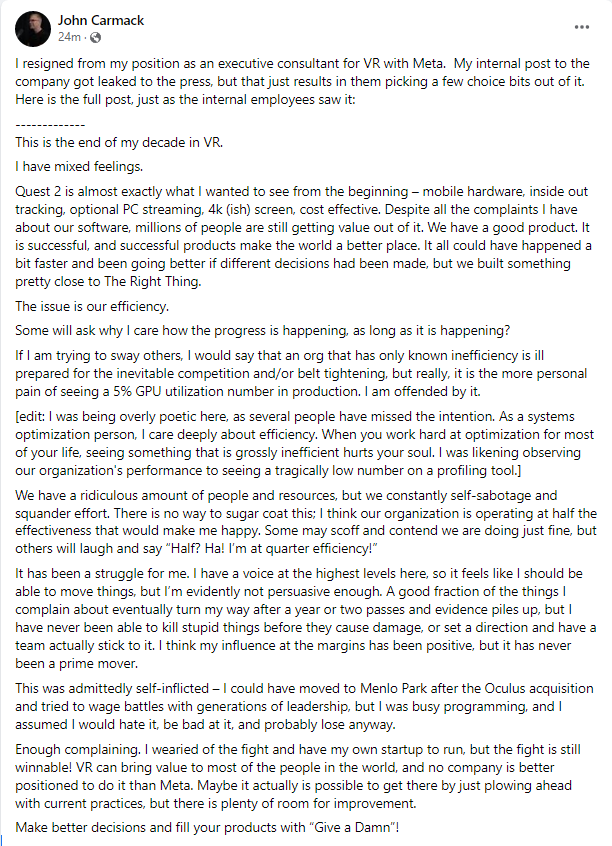 He will now continue to devote much of his time to the topic of artificial general intelligence at his new company, Keen Technologies. After the announcement, he posted on Twitter: 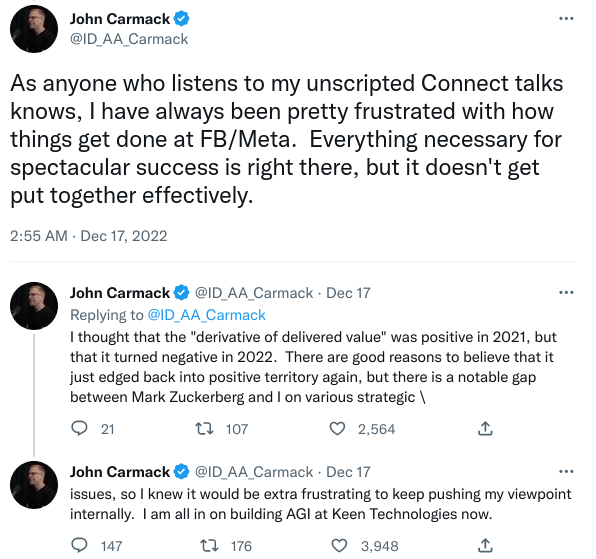 On 2022-08-28 we had a post here with a five hour conversation between John Carmack and Lex Fridman, “John Carmack on Programming, Game Development, the Metaverse, and Artificial Intelligence”.

Best business model, not the best technology, wins out in the long term.

The first thing I think of with Zuckerberg’s FB/Meta platform, is how could FB/Meta shadow ban / de-platform Conservatives, and still be a viable “social platform”. In the long term a Conservative or Free Market platform likely would take away a big chunk of their revenue stream (e.g. Twitter, Gab, Truth, etc. 2022).

Above statement by John Carmack reveals FB/Meta internal issues. It is not surprising—the bigger the organization, the less efficient. I watched the Lex Fridman interview of John Carmack and it revealed a H.R. as well as technical challenge of using different programming languages in one project. In my humble opinion, this could be solved by internally developed talent—easier said than done.

So, if FB/Meta did not shadow ban / de-platform conservatives, it would have an excellent business model. So, Zuckerberg is likely out of CEO in near future, and a Musk-like “free speech absolutist” will be elevated—and the inefficiencies will continue as long as they have customers (much like IBM, Microsoft, Sears Roebuck continued on for decades past their prime). Who knows, FB/Meta may bolt on other tech and languages making it even more inefficient, but more profitable too (more customers, revenue ) …

I speculate, from John Carmack’s conversation with Lex Fridman, that Keen Tech project will be using a single programming language. Godspeed!

It isn’t just that big organizations are inefficient. It is that the the world reserve currency’s structural bias toward centralization of positive network externalities emits a smell wafting globally into ancient cultures drained of vitality by their own highly evolved rentiers. Awakened to the aroma of the world reserve currency, they emerge like xenomorphs to demolish whatever protections more naive cultures have against them so as to capture and lock in centralization in ways that are traumatically inconceivable to the naive cultures of the West. 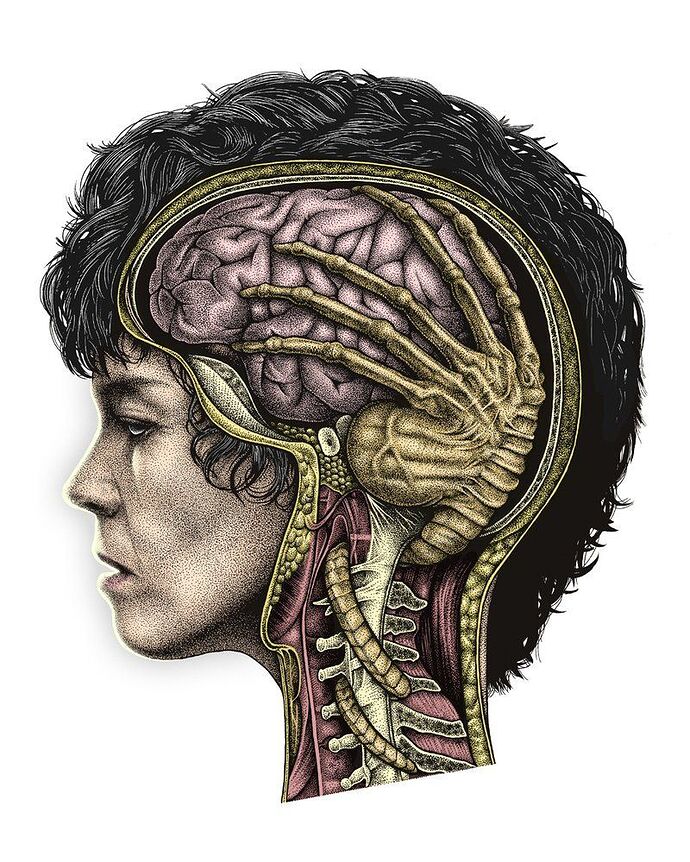 Short of massive violent uprising against the centralization of positive network externalities of civilization (and its likely fall), the thing that most-threatens the mind-huggers is their exposure, as such, by a principled Algorithmic Information Criterion approach to macrosocial models of causality: genuine social science. The resources (data, machine and human) available, hence the potential for this are absolutely enormous but require a rigorously grounded definition of Artificial General Intelligence so that is (science) can be factored out from ought as with AIXI’s definition of AGI.

Watch for Carmack mentioning “AIXI” or the Hutter Prize. If he does, watch then for him to be cancelled by the xenomorphs.

2 Likes
Imitation is the sincerest form of flattery unless