Michael Anton—Conservatives and the Right to Revolt

John Derbyshire discussed and recommended a recent essay in American Greatness by Michael Anton, “What Does Fidelity to Our Founding Principles Require Today?”. The discussion starts at 05:22 in the recording, and a transcript appears in this VDARE.com post.

Michael Anton was deputy assistant to the president for strategic communications in the Trump White House from February 2017 to April 2018. Prior to the 2016 presidential election, he wrote, under a pseudonym, an essay in the Claremont Review of Books, “The Flight 93 Election”, he made the case for electing Donald Trump president:

[A] Hillary Clinton presidency is Russian Roulette with a semi-auto. With Trump, at least you can spin the cylinder and take your chances.

In the present essay, adapted from a speech at the Philadelphia Society in September 2022, Anton raises the question,

What have our conservatives conserved? But before we answer that—hint: almost nothing—let’s first ask: what were they supposed to conserve? What do they say they are conserving in all those fundraising letters they send out that have been netting them hundreds of millions per year for most of my lifetime?

He finds establishment conservatives utterly ineffective in conserving anything and, in addition:

Conservatives have long believed that the noblest thing they can do is “police” their own side. The Left of course never does this. The Left works overtime to ensure that its people are excused of murder, arson, and rioting. Meanwhile, the conservatives eagerly seek the death penalty for their own over parking tickets.

One thing I’ve noticed is that conservatives really get mad when you point out that people who treat you like enemies are, in fact, your enemies . Finally, the conservatives find a backbone, and righteous indignation! To refer to someone libeling you, trying to cancel you, calling for your “extirpation” and even assassination as an “enemy”? How dare you! Civility in politics above all else!

Of the “principled” who shrink from confronting the Left and/or rolling back their (largely unopposed) gains across a wide front, he notes:

[T]o the extent that the modern conservative takes his “principles” seriously, he must oppose the founding principles, which are not conceivable absent the American Revolution. But he must oppose the revolution—what with its friend-enemy distinction, its radicalism, its “instability” and “incivility,” its violence. Plus, of course, its racism, sexism, classism, lack of transgender bathrooms in Independence Hall (though, for all I know, they’re there now), and all the rest.

Is the right of revolution ever justified? Was it justified only that one time, in 1776, but never again? If so, why was it justified then and what makes it unjustifiable ever again? Because of historicism? Because the American Revolution was somehow an irreversible leap forward?

Is it that you think things can’t ever get bad enough to justify recourse to this right, or merely that they won’t? Is there some deep structural reason for America’s privileged position, or is our miraculous continued good fortune merely your expectation? If the latter, then you are implicitly admitting, at least in theory, that the right of revolution might, at some point, be justified—and that it has not been obviated by “history.”

This is a brilliant piece of analysis and writing. Read the whole thing.

Here is my 2011 (good grief, a decade ago!) essay, “Enemies”, on acknowledging enemies for what they are and dealing with them accordingly, and an earlier (2009) Fourmilog post on “Respectfulness vs. Civility” on giving politicians the respect they are due.

I haven’t yet read the OP-recommended essay, but I can say I still remember The Flight 93 Election. I still have a copy saved. Like many prescient pieces which accurately portray the state of this nation, it chronicles the ineffectiveness of all who oppose the progressive juggernaut. Only Trump made a difference and they are still trying to kill him (through ‘lawfare’ at the moment). I hope he has the best security apparatus and bodyguards. Should some would-be leftist saint succeed in assassinating him, the perp’s hagiography and elevation by our enemies could well ignite the solid rocket booster-like store of the tamped rage encased in the pressure vessel that is our constricted polity.

Our revolution was fought over what amounted to a 3% tax rate in the colonies. That list of abuses that Jefferson rattled off in the DoI were reactions to our reaction to that tax rate. Considering that was all it took to dive into an 8 year war that saw the occupation and destruction of many port cities, I would say that the US is currently overdue for another. But corporatists are never going to support a destablizing event like a revolution because they need the status quo in order to retain their hold on money and power. I think it is wrong to call them “conservatives;” they are more akin to corporatists or even fascists. But in the end, revolution requires a sizeable portion of the population, which we don’t have. There is no way of coellescing the people together who want it and the rest are so brainwashed into Neocon stupidity that they could never conceive of the general government as anything but that entity that won WWII and defeated the Commies.

There were not any “overwhelming” number of Americans FOR revolution. Indeed, I would propose even the firebrands in Massachusetts weren’t for “splitting with England” They just wanted what they saw as their due.

In that vein, a revolution here would not require any overwhelming NUMBER OF PEOPLE. It would require ORGANIZATION; we already have the required number of pissed-off people. They need leadership and vision.

Dev, you actually hit on it: organization.

I’d like to believe this. But did anybody say anything when Trumps home was raided? I mean anything effectual. Denunciations, vowing revenge…no, in fact most of our popular commentators, even Greg, said: they WANT you do get violent, don’t take the bait! So we’re suppressing ourselves, we’ve internalized the controls. And always before us is the unbearable knowledge of the fate of the unarmed Jan 6 rally attenders.
Even 20 years ago, Americans weren’t like this, still reeling from 9/11, there were a few Blame America First voices but it seems to me mos’ly we realized what we had, we knew how much we had always loved it, we wanted more of it. Oh I’m so sad. Is this being old?

I find it bemusing that “The Flight 93 Election” came out shortly after I posted this to my FB. Something was definitely “in the air”, so to speak. 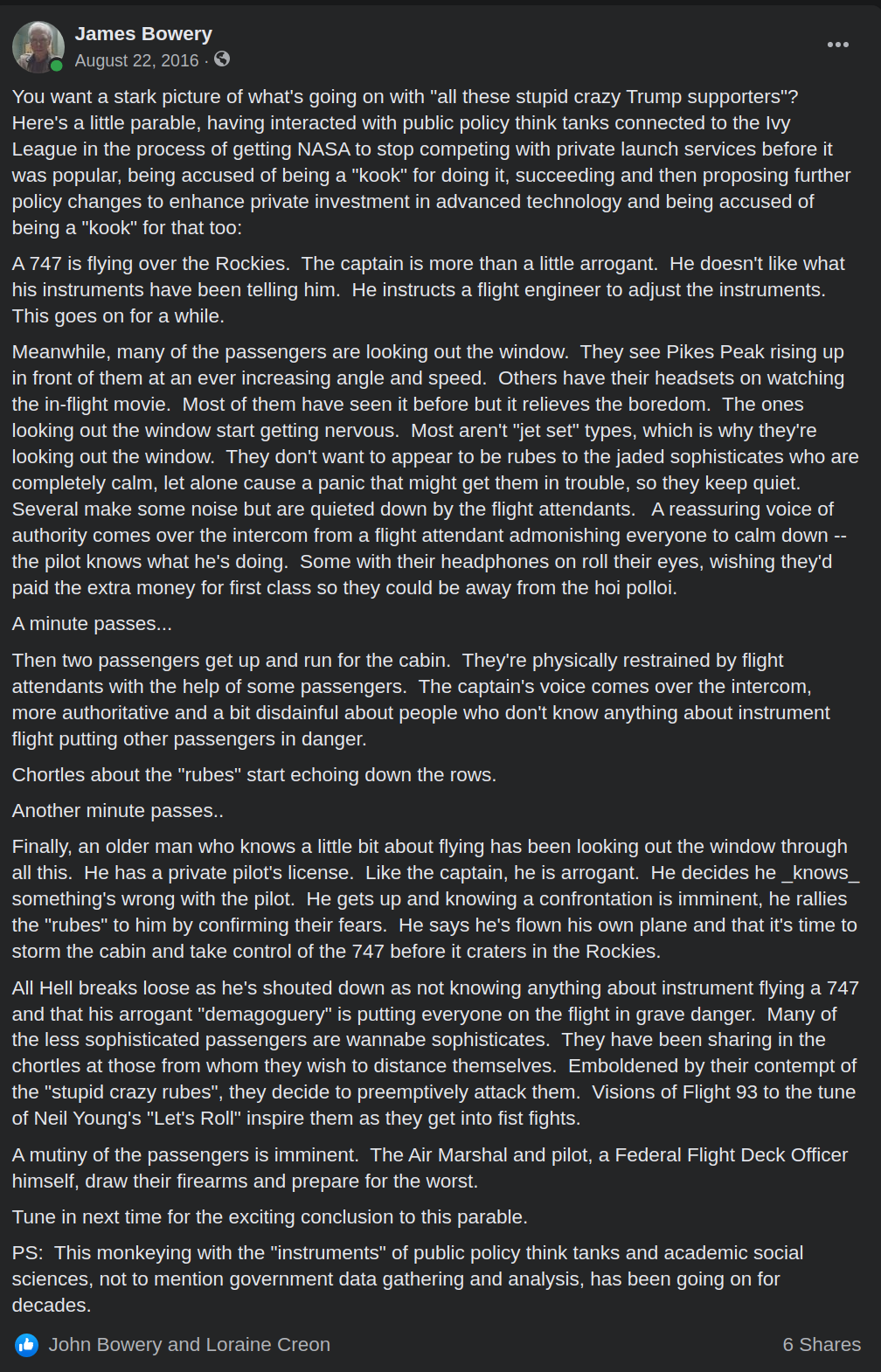 I think initially, the Boston Patriots were fighting for their rights as Englishmen, as they understood them after the Glorious Revolution. One of those rights was representation in Parliament. When the Regulars marched out on Lexington and Concord to seize the colonists arms and powder, they fought back.

They continued to petition the Crown even as they lay siege to Boston. It wasn’t until the rejection of the Olive Branch Petition that the 2nd Continental Congress considered independence.

To your point about organization, the Patriots had an extensive network, as David Hackett Fisher notes in Paul Reveres Ride. Would that we had such networks!

There were not any “overwhelming” number of Americans FOR revolution.

Most of the histories I’ve read seem to agree that around a third of the population wanted separation from Britain, a third remained loyal to the Crown, and a third didn’t care and just wanted to get on with their lives and be left alone.

My guess is that this is something like what would happen in a conflict today, although the opposed factions may be a smaller percent of the population and those not engaged on one side or the other larger. This is consistent with the increasing polarisation shown in many polls.

The essential problem of revolution today is organizing. While leftists can use any means of communication to organize violence unhindered, anyone on the right trying to organize most any opposition - however peaceful - can expect a prompt visit from SWAT-clad FBI, followed by a Jan. 6 style legal treatment and demonization by the “media”.

ALL that means is that one has to be circumspect with how to “organize”. Recollect Mao was ALSO hounded by the “police” - he was just better prepared to avoid the consequences.

USE history - and other people’s successes.

I recommend this blog post from January, 2017. The author uses a review of Bryan Burrough’s Days of Rage as a jumping off point for a survey of the political violence in the U.S. during the late '60s/early '70s.

One thing he notes early on in the post is this:

He expands on this later, noting the leftist National Lawyers Guild and the Episcopal Church, among other organizations.

Read the whole thing. It’s worth it.

I don’t have time for the whole article now, but think I get the gist.

Our inattentive society wasan’t even reminded by the somewhat lesser replay of 2020. Might that be because the perps back then in the '60’s & '70’s are today’s swamp creatures - at the highest levels? And maybe all of today’s MSM “journalists”?

If not, they’re mentoring today’s swampers.

I’m not sure it’s quite that. I think it’s more we’re accustomed to being law abiding so while I think a lot of people were appalled they just didn’t know what to about it. Among other things they thought elections would solve this, not expecting such a wholesale steal.

Notice NOW there are a LOT more people up in arms, so to speak. Notice, too, that states are beginning to flex their muscles a lot more. Who would have thought back in, say, 2018 that governors would ship illegal aliens to blue states - but today it has become not only frequent but well supported.

Along with organization amongst us, the People, I think it would be very prudent to have one or two State governments behind us. Why? Because those governments control their STate’s National Guard. We will need access to F-15s and such if we are to seriously make a play at throwing off this tyrannical yoke. Otherwise, I suggest that each of you mark and circle on a paper map–please do not go digital–where every single National Guard (Air and Land) base is located so that when the time comes those armories can be struck and those provisions can be taken.

Derbyshire is usually spot on and entertaining. He spears Rich Lowry perfectly. Tongs!

He expands on this later, noting the leftist National Lawyers Guild and the Episcopal Church, among other organizations.

George Bush is an Episcopal .

True, but not all Episcopalians are leftists. For example, I don’t think the late Bishop Spong of NJ and George Bush have the same outlook and political orientation.

I suppose I should have said. “…some parishes and diocese of the Episcopal Church.”

USE history - and other people’s successes.

As it happens, I am reading an old (1901) history of Julius Caesar, which necessarily encompasses the effective end of the Roman Republic. Change a few of the details, and that old author could have been describing today.

Back around 50 BC, the Roman Political Class had lost its moral fiber, becoming inbred & incompetent, breaking or changing their own laws as required to keep the baksheesh flowing in. The courts were corrupt and in the pocket of the Political Class, used to destroy inconvenient people. The countryside had been largely denuded of Roman citizens, and was mostly occupied by imported slave labor. Dispossessed Romans had been driven into the cities, where they produced little and were dependent on government handouts. Rome relied heavily on imports.

History suggests that what happens next is violence, up to & including civil war. And eventually, the strong man on a horse rides in. What happens after that depends on whether the strong man is wearing a white hat or a black hat. We will have to wait & see.