NASA’s Artemis I mission, using the Space Launch System to launch an unmanned Orion spacecraft on a six week journey around the Moon, will begin its mid-November 2022 launch campaign with a launch window scheduled to open at 06:04 UTC on 2022-11-16. If launch proceeds on schedule, the live player above will begin coverage of the countdown at 03:30 UTC on 2022-11-16.

On 2022-11-14, NASA will hold a Countdown Status Briefing for the mission, discussing system status and weather prospects for the launch opportunity.

Previous launch attempts were cancelled due to a variety of problems encountered in loading propellants onto the rocket. If the countdown proceeds as currently scheduled, coverage of propellant loading will begin at 21:00 UTC on 2022-11-15.

For updates on launch status, see the NASA Artemis Blog.

This is an Artemis I Prelaunch Mission Update media teleconference held at 23:30 UTC on 2022-11-14, after the conclusion of the mission management team meeting. Participants are:

This is an audio-only recording.

Here is the Artemis I post-launch news conference.

At 7 hours and 43 minutes after launch, the Orion spacecraft’s service module performed the first trajectory correction maneuver to trim its trajectory toward the Moon to the desired intercept point. This burn was performed by the Orbital Maneuvering System (OMS) engine, which is a re-used Space Shuttle OMS engine that flew on 19 Shuttle missions between 1984 and 2002 before making its last flight on the disposable SLS/Orion. This is video from NASA Mission Control of the burn, which starts at the 29:15 point in the replay.

Here is Scott Manley’s summary of the first day of the Artemis I mission, including a variety of pictures of the launch and video of the Earth from the Orion spacecraft en route to the Moon.

Great to see the mission is going well so far and the launch was successful. I was apprehensive about the SLS’ ability to actually launch given the long delays. This makes a stronger case for Starship if they can deliver on the lower cost promise.

Who knows, it may be possible after all to witness a Starship rocket taking off from the Moon and returning to Earth within the next 15 years.

Who knows, it may be possible after all to witness a Starship rocket taking off from the Moon and returning to Earth within the next 15 years.

In 2017, Eric Berger of Ars Technica published a prediction from an industry source he respects, off the record, that “the first SLS launch will probably come around 2023”. This caused a flutter and even anger from SLS fans, but turned out to be “about” right six years later. If you go by U.S. government fiscal years, we’re already five weeks into 2023.

In October 2020, the same source predicted that NASA would award a sole-source contract for the Artemis Human Landing System to SpaceX. Most analysts had dismissed SpaceX’s bid, which required development of Starship, Super Heavy, and orbital re-filling, in favour of the more conventional bids from Blue Origin and Dynetics. Berger tweeted his source’s speculation on 2020-10-28:

FWIW this same source, who has absolutely no ties to SpaceX, recently speculated that Starship would eventually walk away with the Human Landing System contract because of its rapid hardware development.

A few days ago, Berger asked the “space prophet” when he envisioned the Artemis III mission actually landing on the Moon. Originally planned for 2024, it is now scheduled for “no earlier than 2025”. He asked, “Do you think Artemis III will actually happen?” The guru responded, “My starting point is 2028.” and added “It may happen in 2028, but I’m not sure it will be on SLS.”

Could NASA, faced with increasing budget pressure and glacial progress on SLS, re-architect the Artemis III lunar landing mission to use Starship entirely, or Crew Dragon as the crew transport vehicle? Berger notes, “Whether this actually happens will come down to execution—which of SLS, Orion, and Starship can demonstrate safe spaceflight?—and politics. When going before lawmakers, it will be difficult for NASA to sell a SpaceX-only lunar mission. But at some point, pragmatism may trump politics.”

Read the whole thing, “The oracle who predicted SLS’s launch in 2023 has thoughts about Artemis III”.

Thank you for sharing the article – well written and informative.

I found the last two paragraphs before the closing most interesting as this scenario appeals to my inner geek the most. Getting to witness this mission to the Moon would be fantastic. Not sure it serves a practical purpose, other than “we did it because we can”, but it’s a wild scenario.

The safest and lowest-cost means of completing an Artemis mission to the Moon, therefore, may involve four astronauts launching to a fairly high altitude in low-Earth orbit on Crew Dragon and rendezvousing with a fully fueled Starship. The astronauts would then fly to the Moon, land, and come back to rendezvous with Crew Dragon in Earth orbit. They would then splash down on Earth inside Dragon.

This architecture is less risky because it doesn’t involve launching on SLS, nor does it require two rendezvous and dockings in lunar orbit, far from Earth. The crew would only spend a couple of more days aboard Starship than they would during the existing Artemis III plan, so Starship life support should be up to the task. If you care about costs, this plan also excludes the $4.1 billion launch cost of Orion and the SLS rocket and substitutes Crew Dragon, which would be on the order of one-twentieth of the cost.

I’m still struggling with the “so what” of the return to the Moon via manned mission. Not sure what is the upside other than scoring points in the perennial competition between industrialized nations. And if the 1960s US economy could pull that off from scratch it was because our economy was firing on all cylinders with significant manufacturing and industrial capabilities. Not sure the US economy of the 2020s and 2030s can sustain that level of industrial effort. We might settle for NFTs!

I’m still struggling with the “so what” of the return to the Moon via manned mission.

Excellent point! Like many others, I would love to see human beings return to the Moon. But it is very fair to ask – What are they going to do there?

There needs to be a plan, or at least a dream, about what economically sustainable activity would justify the high costs of going to the Moon as anything other than a desperate effort to keep up with the Chinese.

One idea often discussed is mining Helium-3 to return to Earth and fuel all those fusion reactors that might be built. Of course, the supposition of fusion reactors (10 years in the future for the last 70 years) introduces yet another variable into the system. A more practical idea might be manufacturing rocket fuel on the Moon for flights to Mars, as a cheaper alternative to lifting that fuel from the Earth’s gravity well. But that raises the similar issue of "Why go to Mars?’

The standard fall back argument is that going to the Moon is like building the first laser. Who could predict the multiplicity of uses human beings were going to find for that scientific curiosity, the laser? But that does seem like a cop-out – and not much of a basis for justifying the huge expenditures required for establishing a meaningful human presence on the Moon. Just like with the 1500s voyages to the New World, what is needed is the hope of a major economic payout from the journey. 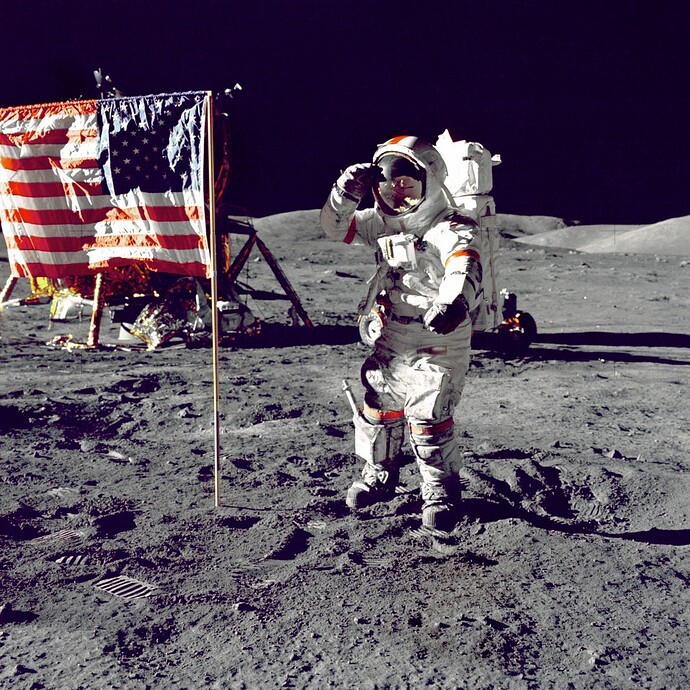 Unfortunately, nobody set the next goal, and NASA scattered. I think Musk wants to create a sustainable colony on Mars, which is an intermediate goal to creating a space-faring civilization. My fear is that we’ve got too much internal friction and conflict to be successful at it, but an external goal can help address that as well.

On 2022-11-18, NASA held a preview of the forthcoming fly-by of the Moon by the Orion spacecraft on its way to entering the planned Distant Retrograde Orbit of the Moon. 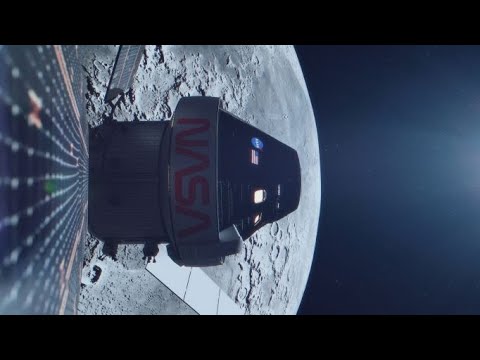 NASA will live stream the outbound powered lunar flyby on 2022-11-21 at 12:15 UTC, with the burn onto the retrograde trajectory occurring at 12:44 UTC, and Orion’s closest approach occurring shortly thereafter at 12:57 UTC. These events will occur on the far side of the Moon as seen from Earth, so confirmation and images will be received only after communications are re-established after the spacecraft emerges from behind the Moon’s limb.

I will post video players for these events when they become available. 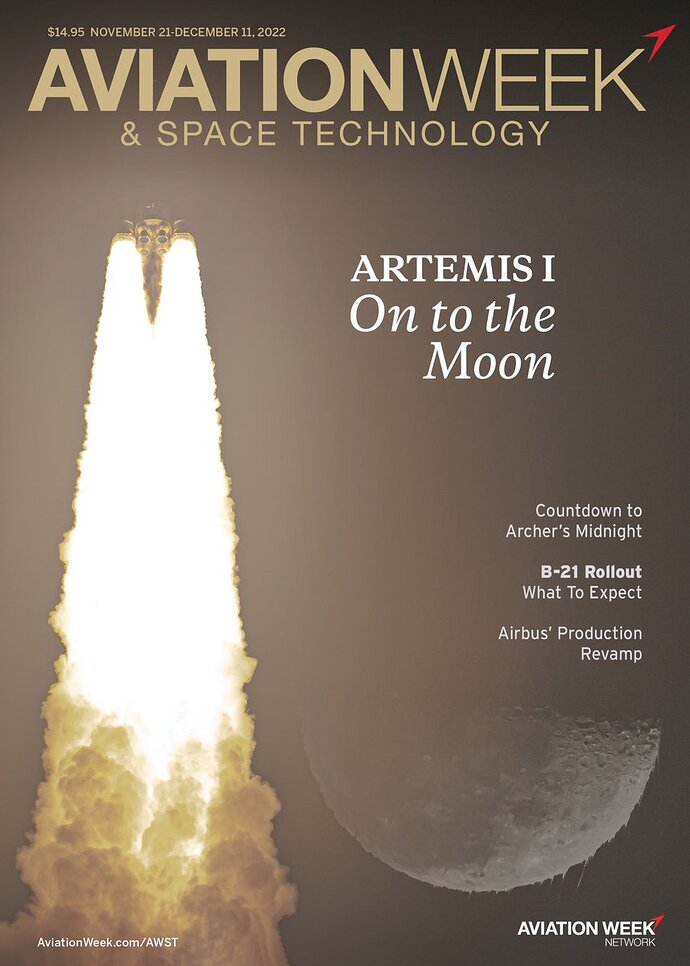 857×1200 93.9 KB
The “drips” seeming to emerge from the bottom of the Moon are due to refraction of light by shock waves from the booster’s exhaust plumes refracting light passing through the atmosphere.

Here is Everyday Astronaut’s compilation of Artemis I launch video. Video was captured at 4K or higher resolution and sound in floating point raw audio. You may have to set the YouTube video “Quality” setting (it’s under the “Gear” icon at the bottom of the player” to view this in resolution higher than your default setting, and/or view the video in a separate window to allow expanding the player to show all of the detail in the video.

The burn placing Orion on the retrograde trajectory will begin at 12:44 UTC, and Orion’s closest approach to the Moon will be shortly thereafter at 12:57 UTC.

This is the live stream of Artemis I’s insertion into its distant retrograde orbit (DRO) around the Moon (or, more accurately, within the Earth-Moon system, as the gravity of both bodies determines the spacecraft’s trajectory).

The rationale for the DRO is that the SLS lacks the performance to get to low lunar orbit and back. The DRO allows using the Moon’s gravity to initially capture Orion and then later fling it back toward the Earth. None of the subsequent Artemis missions plan to use a DRO.

SLS may be NASA’s “mega Moon rocket”, but it can’t do what the Saturn V could—actually go to the Moon.