On Monday, 2022-09-26 at 23:14 UTC, NASA’s Double Asteroid Redirection Test Impact (DART) spacecraft is planned to deliberately collide with the small (160 metre) moon which orbits near-Earth asteroid 65803 Didymos. The asteroidal moon, discovered in 2003, has been given the name Dimorphos, but it doesn’t care if you call it “Didymoon”. The 500 kg DART spacecraft will impact Dimorphos at a velocity of 6.6 kilometres per second, and is expected to reduce the orbital velocity of the moon by a tiny amount which will not be directly observable but which can be inferred with great precision over time by measuring the time of mutual eclipses of the asteroid and moon. This will allow assessing the feasibility of using kinetic impactors to divert asteroids discovered to be on a collision course with Earth.

The DART spacecraft will transmit images of the target every second until impact. Fifteen days before impact, the main DART spacecraft bus released a CubeSat called LICIACube built by the Italian Space Agency which will attempt to image the impact and ejecta from it. The impact will be observed by telescopes on several continents on Earth, the Hubble and James Webb space telescopes, and the Lucy spacecraft now en route to the Trojan asteroids of Jupiter.

On 2022-09-23, the project scientists, engineers, and managers of DART held a press briefing on the upcoming impact, recorded in the video. (Note: the official NASA Webcast of the briefing cut off the first and part of the second presenter’s talk. I don’t know why.) The impact will be covered as it happens on NASA TV—I will include a live stream player in the comments when it is announced.

The following live stream will show a direct feed from the DRACO camera on the DART spacecraft as it approaches and steers toward its impact with Dimorphos. NASA describes it as:

… a real-time feed from the DART spacecraft enabled through the DRACO [Didymos Reconnaissance and Asteroid Camera for Optical Navigation] camera sending one image per second to Earth. In the hours before impact, the screen will appear mostly black, with a single point of light. That point is the binary asteroid system Didymos which is made up of a larger asteroid named Didymos and a smaller asteroid that orbits around it called Dimorphos. As the 7:14 p.m. EDT (23:14 UTC) impact of asteroid Dimorphos nears closer, the point of light will get bigger and eventually detailed asteroids will be visible.

After impact, the feed will turn black – due to a loss of signal. After about 2 minutes, this stream will turn into a replay – showing the final moments leading up to impact.

The live stream from the DRACO camera, showing images updated once a second as DART approaches the asteroids, is now active. At this time (21:36 UTC), the image is a single pixel in the centre (good!) of the frame. It does not yet resolve Didymos and Dimorphos/Didymoon separately. Once it does resolve them independently, it will shift targeting to Dimorphos.

Coverage with commentary will begin at 22:00 UTC.

This is the last full frame image from the DRACO camera before impact. 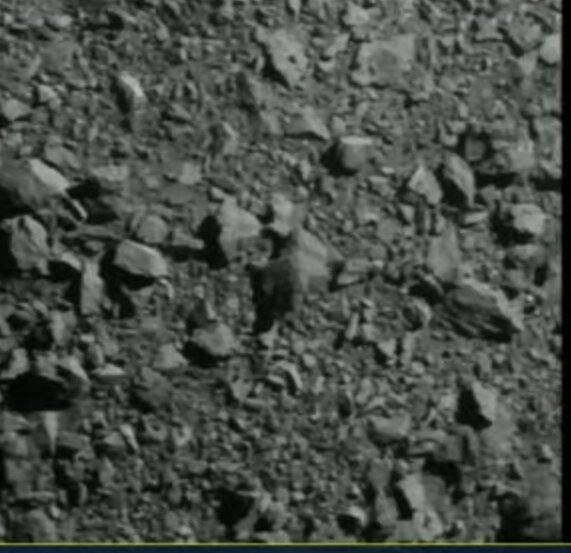 Here are the last few minutes, culminating in impact. At the start, you can see Didymos disappearing at the bottom left as the spacecraft homes in on Dimorphos.

NASA, take a lesson from SpaceX and design for REUSE.

The ATLAS (Asteroid Terrestrial-impact Last Alert System) Project operates a network of four automated telescopes, two in Hawaii, one in Chile, and one in South Africa. The 0.5 metre telescope in South Africa imaged the DART/Dimorphos impact as it occurred.

The asteroid (which is a point source—the apparent size is due to the point spread function of the detector and the intensity of the object) brightened dramatically (other observers estimated it around two magnitudes) and cloud of ejecta was seen expanding away and dispersing after the impact.

One of the big unknowns about this experiment was the extent that ejecta from the asteroid might contribute to the delta-v to change its orbit. Clearly, there was plenty of material ejected, so now we’ll have to wait for orbital timing measurements to quantify the effect.

Here are images captured by the Virtual Telescope Project during the impact using a 12 inch telescope at the Klein Karoo Observatory in South Africa. Click the image to enlarge. 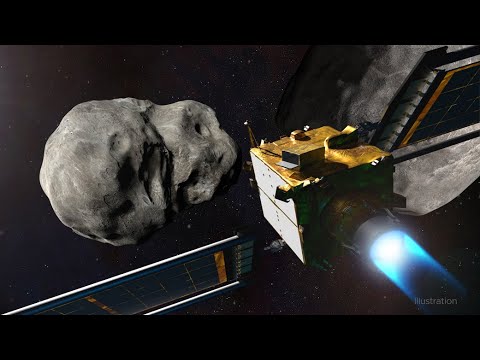 The LICIACube Light Italian CubeSat for Imaging of Asteroids) miniature spacecraft, which was released from the DART mother ship on 2022-09-11, observed DART’s impact with Dimorphos from a stand-off distance of around 65 km before flying by the asteroids two minutes and 45 seconds after the impact. The first images of the impact have now been downlinked.

Didymos is to the left and the Dimorphos at the moment of impact is at the right. Note the streamers of ejecta, which were unexpected. 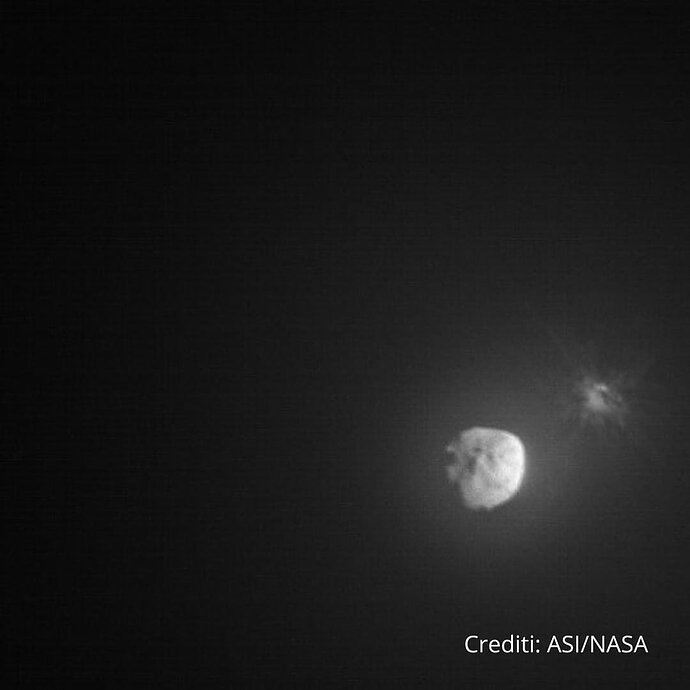 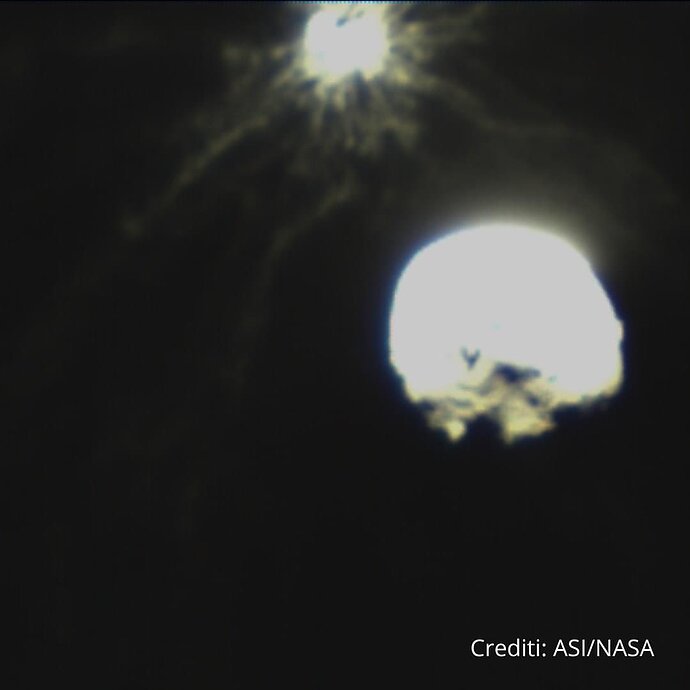 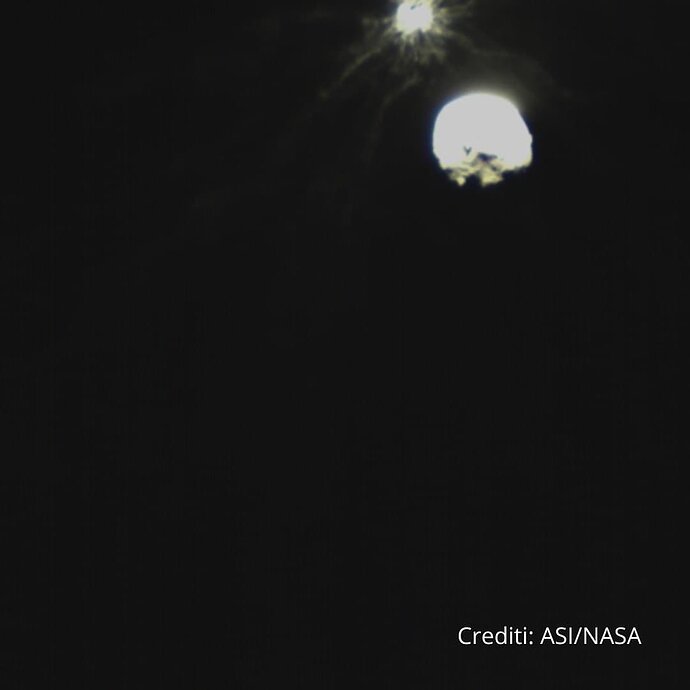 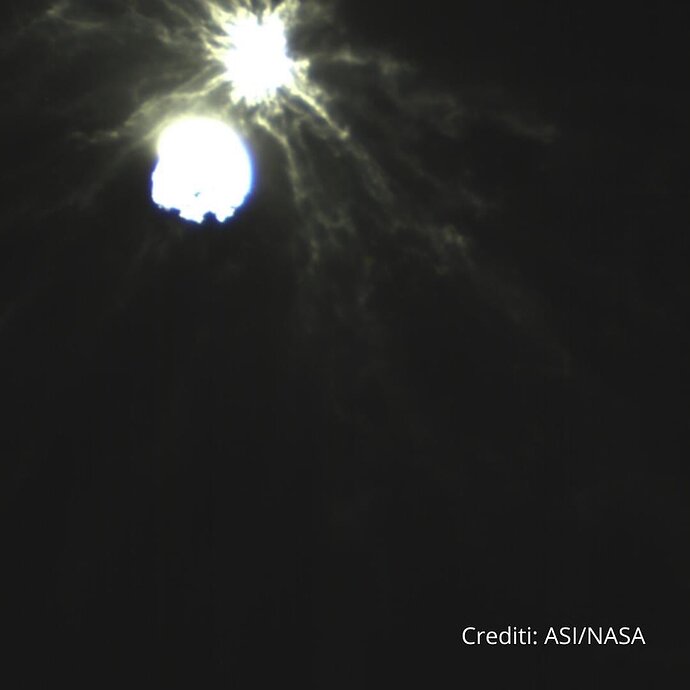 1080×1080 27.7 KB
Phil Metzger has posted a long Twitter thread about the surprising filaments in the impact imagery and what they might tell us about accretion of objects in circumstellar discs.
4 Likes
johnwalker 28 September 2022 12:25 #10

Here is Scott Manley’s take on the DART impact imagery, including his own smoothed version of the approach and impact snapshots from DART.

Interesting observation that the surface of the target asteroid was composed of large boulders, without much finer material. That raises the question of whether this particular asteroid might not be typical of a dreaded jumbo asteroid headed towards the Earth, and hence whether the results of this collision might not be typical of a collision with a more consolidated kind of asteroid?

Has anyone seen any estimates of what the gravity of this asteroid would be, relative to Earth’s 1 g?

Has anyone seen any estimates of what the gravity of this asteroid would be, relative to Earth’s 1 g?

Gravitational force is more or less proportional to the mass of the object. (There are smaller effects on surface gravity depending upon its density and radius, but these are usually small and don’t affect gravitational deflection of other bodies.)

Now let’s do Dimorphos (Didymoon). Its mass is (even bigger guess) around 5\times 10^{9} kg, so surface gravity is 8.4\times 10^{-16} g. Its gravitational acceleration would be 8.2\times 10^{-15} g, or roughly 1042 nanometres per hour squared or, if you like, 29.4 millimetres per week squared. This implies an escape velocity of 0.0884 metres/second, or 318 metres per hour (most people in reasonable health can walk at a rate of around 5000 metres per hour), so it’s unlikely in the extreme that any of the ejecta from the impact will be pulled back to fall on Dimorphos.

Doesn’t it follow then from the unexpectedly large magnitude of ejecta that such an object would pose no risk if it were to collide with Earth?

In other words, does the outcome of the experiment hold much predictive value for what would happen with a “hard” nucleus asteroid that might actually put a literal ding on the Earth car door?

Doesn’t it follow then from the unexpectedly large magnitude of ejecta that such an object would pose no risk if it were to collide with Earth?

It has been suspected for some time that some asteroids, especially small ones, are “rubble piles” of material ranging from dust to boulders which are held together only by the very weak mutual gravitation of their mass. It is likely that such an object would, on striking the Earth’s atmosphere, disperse into individual chunks few of which, if any, would reach the surface. Since Dimorphos is the smallest asteroid ever examined close-up, it’s not surprising that it is one of these rubble piles, but it will take more analysis of the impact, orbit deflection analysis, and the follow-up visit from the ESA Hera spacecraft to characterise its composition more precisely.

We also know that other asteroids are made of tougher stuff, since we have rocky and metal-rich meteorites that have made it to Earth. Asteroids are a diverse population, and it will take many more visits to get a sense for how many of each kind there are in various parts of the solar system.

The Lucy mission now en route to Jupiter’s orbit will visit seven asteroids which may be of primordial origin and the Psyche mission will rendezvous with what appears to be a metallic asteroid, the first of the kind to be visited by a spacecraft.

It will be interesting to see whether the DART experiment outcome will be taken as validation for the approach.

If hard nucleus asteroids pose a risk to Earth but we could only experiment with DART on a loose pile of dirt that has little predictive value outside of other low risk piles of dirt, the usefulness of the mission decreases significantly. It’s more like looking for the lost car keys under the light in the proverbial parking lot because that’s where there’s light.

What remains valuable is the proven ability to successfully “target” a minuscule asteroid that is far away and actually make it happen from launch to impact. Beyond that, it’s unclear whether DART supports the expectation of deflecting anything with a hard nucleus. Wouldn’t it be the equivalent of shooting a .220 bullet at an armored car and hoping it might actually affect its trajectory?

Thanks for the estimate, Mr. W. It is interesting that, with such miniscule g forces, Didimoon orbits around Didymos at a not-insignificant distance. Intuitively, that seems like a rather unstable situation. It will be disappointing if a (very successful!) direct hit does not destablize Didimoon’s orbit.

Prior to DART’s impact, it took Dimorphos 11 hours and 55 minutes to orbit its larger parent asteroid, Didymos. Since DART’s intentional collision with Dimorphos on Sept. 26, astronomers have been using telescopes on Earth to measure how much that time has changed. Now, the investigation team has confirmed the spacecraft’s impact altered Dimorphos’ orbit around Didymos by 32 minutes, shortening the 11 hour and 55-minute orbit to 11 hours and 23 minutes. This measurement has a margin of uncertainty of approximately plus or minus 2 minutes.

Before its encounter, NASA had defined a minimum successful orbit period change of Dimorphos as change of 73 seconds or more. This early data show DART surpassed this minimum benchmark by more than 25 times.

Focus now is shifting toward measuring the efficiency of momentum transfer from DART’s roughly 14,000-mile (22,530-kilometer) per hour collision with its target. This includes further analysis of the "ejecta” – the many tons of asteroidal rock displaced and launched into space by the impact. The recoil from this blast of debris substantially enhanced DART’s push against Dimorphos – a little like a jet of air streaming out of a balloon sends the balloon in the opposite direction.

To successfully understand the effect of the recoil from the ejecta, more information on of the asteroid’s physical properties, such as the characteristics of its surface, and how strong or weak it is, is needed. These issues are still being investigated.