Careen’s debut as WH “Press Secretary” put me in mind of earlier instances of blockheads on parade. Further, the question instantly pops up: why do we laugh at a blockhead on parade? After all, depending on the circumstances of the parade, it could be a deadly serious thing.

On first perception of a threat, we focus attention on it, eyes wide open and ears attuned and breath held; all agog, as it were. We prepare to fight or get the heck out. If, then, the threat becomes identifiable as minimal - nugatory - a false alarm, we exhale and relax. And for some reason, we laugh. For the moment, we survive, so we laugh. At the end of a joke, when the punch line relieves the tension, we laugh.

It would waste a lot of energy to remain on high alert for a threat shown to be nugatory, wouldn’t it? So laugh now, or cry later.

So yes, those earlier instances: here is Tom Bennet playing Sir James Martin in Love and Friendship, the 2016 film adaptation of Jane Austen’s unfinished Lady Susan. The people are constrained from pointing and laughing at Sir James; nevertheless they do form their views, and we can tell.

Sir James! Sir James! We can never get enough of you! Please, set us all right! 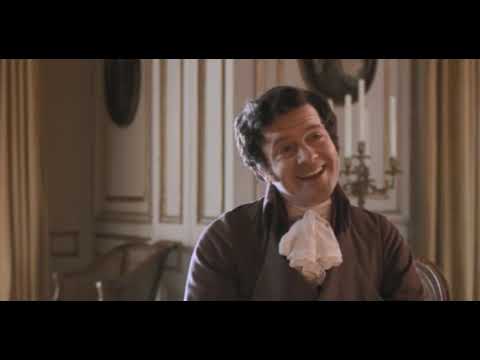 I’m pretty sure Wodehouse read Austen. Either that, or the history of ideas includes some universals transmitted through the air and through time. Instantiation of these universals include Barmy Fotheringay-Phipps. Why, Barmy must have studied his Shakespeare; here he makes his entrance and plays his part, just like all the men and women do. This is from Series 1, Episode 2, “Bertie is in Love.” Barmy enters: 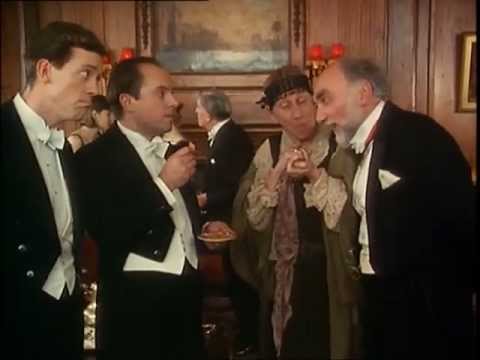 So laugh, I say. It recharges energy for the real fight.

Any other pertinent examples? or reactions?

Wonderful!
Have you ever seen Blackadder?

Hi. No, have not. Should I? And is there a particularly good blockhead in Blackadder?

Well, actually, Hugh Laurie played the blockhead (various characters named George) in that series too. Oh yes you should see it,everybody should! ! I think the Elizabethan ones, and WWI, are my faves…

Any other pertinent examples?

I believe Augustus Fink-Nottle could suggest some useful insights based upon the courtship practices of Lincolnshire newts.

Yes! And if you spike his orange juice, he can handily relieve the tedium of a prize-giving event.

Was it The Bassett, after Bertie narrowly (thanks to Jeeves) escapes his engagement to marry her, who telegraphs him not to visit: “Surely merely twist knife wound!”