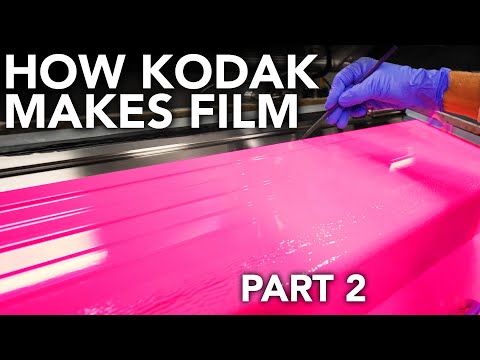 We call it “film”, but the part of photographic film that does the work is the microscopically thin photosensitive emulsion which the film (or, previously, glass plate) serves only to carry. Colour film can have numerous layers, which must be of absolutely uniform thickness, without admixture or contamination. How does one go about manufacturing such a product at industrial scale at a price people can afford?

Interestingly, the advent of motion pictures was an important driver of quality control and economy of scale in film manufacturing. While a casual still photographer might not notice a small difference in colour balance or light sensitivity from roll to roll of film, when shots made from multiple cameras at different times are spliced together into a movie, any such shift is jarring to the audience. Cinematographers demanded absolute consistency in film specifications, and manufacturers had to figure out how to provide it.

Yet another example of almost-magical, truly inspiring results of human communication and cooperation.

And… competition makes this enormously-complex-to-make product, affordable to ordinary people.

Here is an supplement video on quality control in the film emulsion coating process. There is both in-line, full-product surveillance during the coating process and statistical sampling from batches where film is exposed, processed, and examined.