SpaceX is planning to launch a Falcon 9 rocket from Space Launch Complex 40 at Cape Canaveral at 23:08 UTC on 2022-08-04 to place the Korea Pathfinder Lunar Orbiter (KPLO) on a trans-lunar injection trajectory for the Korea Aerospace Research Institute.

The Korea Pathfinder Lunar Orbiter, named Danuri (다누리), is a 678 kg satellite which will orbit the Moon in a 100 km circular polar orbit. It carries six instruments, including one provided by NASA, which will scout the Moon for resources, map topography to select future landing sites, and search for ice deposits.

The Falcon 9 upper stage will perform a second burn to place KPLO on a trajectory to the Moon where it will use its own engines to enter and circularise its lunar orbit. The first stage is booster B1052, which will be making its sixth flight. It flew twice as a Falcon Heavy side booster, then was converted to the core stage configuration. If it completes this mission successfully, the plan is to convert it back to a Falcon Heavy side booster for the ViaSat-3 Americas launch in September 2022.

Here is in-depth information about the KPLO/Danuri spacecraft and mission including the scientific instruments on board and the curious (but extremely fuel-efficient) trajectory it is using to get to the Moon.

Spaceflight Now notes that the 12 hours and 39 minutes between the launches of SBIRS GEO 6 on an Atlas V and KPLO on a Falcon 9 from Cape Canaveral was the shortest interval between two launches from the base since 1967-09-07, when a Thor-Delta and Atlas-Centaur were launched 9 hours and 53 minutes apart. 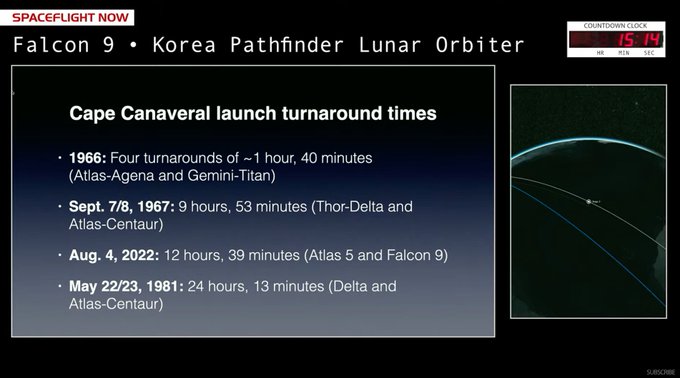 The all time record turnaround between launches from Cape Canaveral is 1 hour and 40 minutes, which was done four times in 1966 when Agena target vehicles were launched on Atlas boosters and then Gemini spacecraft were launched on Titan II rockets to rendezvous and dock with them.