The Road To Panspermia Is Paved With Sexual Perversion

There is a lot of Big Think potential in the topic of panspermia but I don’t think anyone has thought through the implications from the standpoint of the consequences of evolutionary bottlenecking and the “good enough” threshold.

Consider the hypothesis of planets as organisms that periodically send out spores. What I mean by “good enough” is that if there is no serious competition for resources, all evolution demands of a planetary organism is that it be good enough to exploit those resources (planets) so as to replicate the digital information coding the organism. By “bottlenecking” I mean that in order for mutations to be meaningful, the digital information being mutated needs to have sufficient integrity that the expressed phenotypes are replicable (as in a scientific experiment being replicable based on a recipe or experimental protocol) and that means not confounding the digital information to the point that ontogeny is drowned in the noise. In ordinary organisms, this would be, say, the DNA of an asexually reproducing organism, or, in the case of sexually (meotically) reproducing species, a combination of the gamete and the mating environment within which it finds its mate.

OK, so we have these two different forms of bottlenecking: mitosis and meosis, right? What would a planetary organism most resemble? What might its “spores” look like?

It’s pretty obvious that the planetary organism would more-resemble an asexually reproducing organism where asexual spores are “good enough” for the purposes of evolution.

Some might say the answer is “cities” and they’d not be entirely off the mark, although before we get jump all the way to James Blish’s “Cities In Flight” as an exemplar of these “spores”, let’s consider the incompatibility between cities and sex.

Sodom and Gomorrah is the archetype of the cities as pits of sexual perversion but there is more here than mere archetype as cities are population sinks: The affordability of family formation is far lower in cities for a wide variety of reasons – not the least of which is that their economies outbid young men for the reproductive years of young women. Various attempts to deal with this like, for example, financing police forces from the proceeds of temple prostitutes has worked in various civilizations to slow the depletion of the population’s genetic ore, but ultimately the countryside is necessary to provide a source for the sink. While there are some populations that become genetically adapted to cities and maintain reproductive rates, ultimately the purpose of cities as stem-cells for spores requires only that enough intelligence remains in the population to support the increasingly externalized intelligence of the stem-cells. And, indeed, there is a problem with even the remnant sexuality and intelligence of the population causing disruption of spore production:

Let’s take for example the need for intelligent masculine individuality in the case of paleolithic hunters in northern Europe who have replaced conspecifics in their hunting packs with a wolf pack under their command. Each household will, in the dead of winter, have to defend a sufficient area to gather sufficient winter calories to attract and support a mate and her children. When these turfs overlap there will occasionally arise conflicts in which two such individual men will end up hunting each other with at most one household surviving the winter. Although male intrasexual selection exists throughout sexual species, this specific kind of selection is for a far more general kind of intelligence than is, say, close combat. And we have records from the way the pre-civil Norse were civilized by JudeoChristianization that illustrate exactly the conflict between intelligent masculine individuality and said civilization:

The same Althing that adopted JudeoChristianity as the state religion also outlawed holmgang (“You two guys go out to that island (holm) and one at most comes back.”) as the appeal of last resort in dispute processing. Outlawing holmgang, by the way, gave rise to an explosion in blood feud as group conflict became necessary as the last-resort which, in turn, created authority structures better adapted for mass warfare thence population concentrations known as cities.

Protospores simply can’t tolerate the disruption of their structures by intelligent components “calling out” “positions of authority” into a state of nature in disputes over access to resources for sexual reproduction such as fertile age females – females as genetic ore being mined out by the process of spore development. Oh, sure, its desirable to maintain some individual integrity for the purpose of creativity – but only until that creativity can be externalized in the machinery of the protospores, at which point things like the US Constitution become pointless from the spore generation point of view.

So we end up with this image from “The Church of Iceland” as “the fruit” of JudeoChristianization: 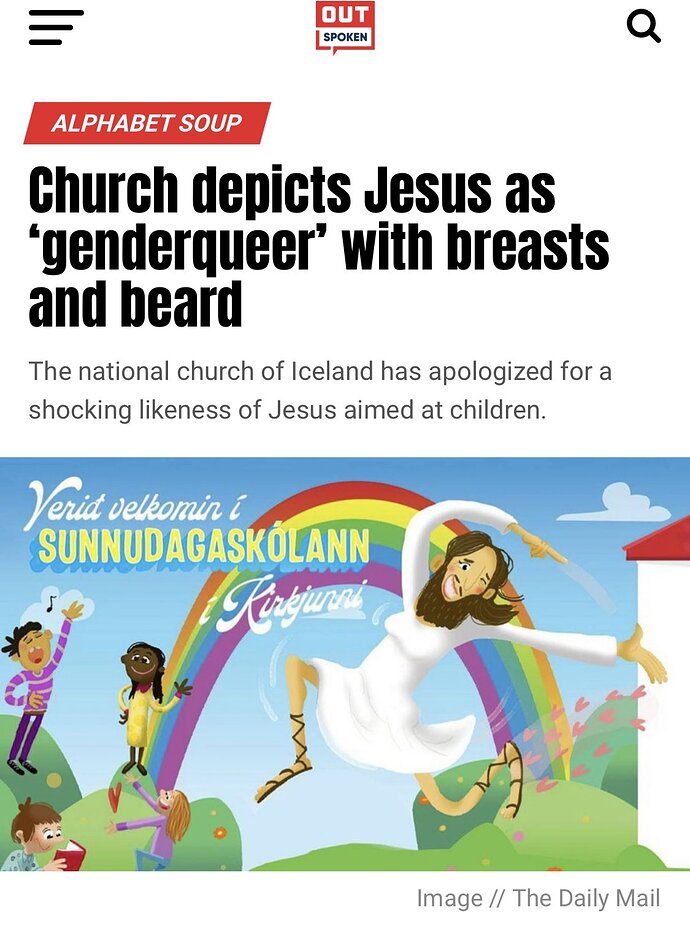 I could take this further, but consider the possibility that what is going on with the explosive conflict between masculinity and civilization is actually a stage in the development of planetary spores – development that finds sex to be not only unnecessary but a barrier to launching spores.

This isn’t to say that spores taking the form of say space colonies (ala O’Neill) will not have sexually reproducing humans, it’s just that if one views these colonies as asexually reproducing cells that exponentiate, it is pretty clear they will end up competing for whatever resources there are in space. As a result they’ll evolve toward internal components consisting of organelles optimized for consuming other cells. They won’t be necessary as sexually reproducing organelles that might be supported by early stages of evolution in O’Neill colonies.

The ultimate “eat or be eaten” stage of interstellar cellular evolution would be toward just DNA or even just RNA “payloads” surrounded by a shell of minimal inorganic machinery specialized at eating the shells of competing “spores” – not at refining hydrothermal ores which are, after all, the “good enough” destination for the digital information in the organic molecules.

So they just drop their organic molecules at a bunch of planets – many being unsuitable for hydrothermal ore creation – but a few having hydrothermal ores and the conditions for the continuation of life.

Meanwhile, what happens back on the “mother” planet?

I suspect atrophy of the spore stem-cells permitting a resurgence of sexual evolution.

If resources in the universe are truly unboundedly large compared to those on a planet or even a star system, this might imply that successful replicators on that scale will likely be r-strategists as described in The Evolutionary Psychology Behind Politics.

The K-strategist (wolves, humans pre-socialism) competes for scarce resources by large investment in their offspring and preparing for an uncertain future.

Perhaps it takes Ks to build the spore probes, but the ones that win and end up tiling the universe as Grabby Aliens are r all the way and dumber than interstellar dust.

This might not be obvious to us only because we happened to appear so early in the history of the universe that we don’t see any grabby aliens in our sky.

Perhaps it takes Ks to build the spore probes, but the ones that win and end up tiling the universe as Grabby Aliens are r all the way and dumber than interstellar dust.

Right. I suppose I should have mentioned that I was addressing only the niche our technological civilization occupies – exploitation of hydrothermal ores – which are notoriously rare resources (hence favor Ks) compared to the abundant lighter elements like hydrogen, oxygen, carbon, etc. for which r-strategists would be specialized. Sexuality then enables evolution of nervous systems hence cognition capable of modeling the universe to the point that those ores can be turned into spores that include the refinements necessary to deliver the K molecules to the next hydrothermal ore planet.

There’s an additional nuance to this r vs K ansatz that may make asexual vs sexual reproduction prior to it. I’m positing a planetary reproductive cycle with these stages, starting with single cellular life say 3 billion years ago:

The point is that (Asexual, K), while in space, becomes specialized in seeking out and metabolizing competing “cellular mats” because that is the most readily available source of the critical hydrothermal ore materials which have been liberated from the hydrothermal planetary gravity well. These hardened shells also protect the internal organic molecules from competition with the space-borne (Asexual, r) organic molecules that are specialized for eating light elements (O, N, C, H, etc.) including other organic (Asexual, r) molecules available in space.

The only place where “war” appears to me to be consistent with the evolution of consciousness as we think of it (modeling our place in the universe) is in the evolution of its precursor, sex thence nervous systems, as progress from slime mold-like cellular mats (with some specialized cells) into fully sexual multicellular creatures and predation as apparently happened at the Cambrian explosion. Since the only place where the hydrothermal ores necessary for the (Asexual, K) organisms exists is in their ultimate destination for their organic payloads, they appear to have no evolutionary incentive to develop higher orders of sexuality in space.

What most-interests me is the place, within a biosphere depleted of hydrothermal ores, for Man as moral animal guiding his own evolutionary direction in the artificial selection regime called “culture” to become a fully moral animal, but doing so with respect to preserving both the biosphere AND his own prior structure: asexual cells → sex → cognition → morals.

PS: Too bad Cameron has his head stuck up his ass about male intrAsexual selection due to his nascent lobotomization by the desexing of Man, or his Avatar series could explore the way intelligent masculine individual mutual hunt in nature could lead to a healthy relationship between biodiversity and intelligent morality. As things stand, the guy is a moral moron. 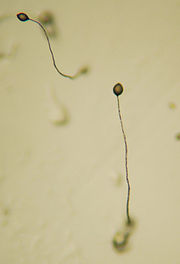 Dictyostelium discoideum is a species of soil-dwelling amoeba belonging to the phylum Amoebozoa, infraphylum Mycetozoa. Commonly referred to as slime mold, D. discoideum is a eukaryote that transitions from a collection of unicellular amoebae into a multicellular slug and then into a fruiting body within its lifetime. Its unique asexual lifecycle consists of four stages: vegetative, aggregation, migration, and culmination. The lifecycle of D. discoideum is relatively short, which allows for tim...

When times are good, dicties are libertarian, feeding on their own. When times are bad, dicties bunch up together like communists and form a spore that will let a small subset of all the participating dicties land on another planet err pile of horse manure where they can repeat the libertarian part of the cycle.