Visualising the Internal Structure of the Proton

Protons, once thought to be indivisible dense bits of matter, have been shown by experiments that scatter electrons off them at high energy, to have a fantastically complex internal structure in which quarks and gluons are continuously being created and annihilated while interacting at near the speed of light. Indeed, around 90% of the mass of the proton is due to the relativistic increase in momentum of these internal components.

Now, a computer visualisation created by Jefferson Lab and MIT shows a representation of this internal structure as measured by electron scattering as two parameters, Q and x are varied. Q can be thought of as equivalent to the spatial resolution of a camera while x is its shutter speed. As Q is increased, the proton is seen increasingly as a pancake due to Lorentz contraction measured in the reference frame of the electron. Here is the full animation showing the effects of varying these parameters. 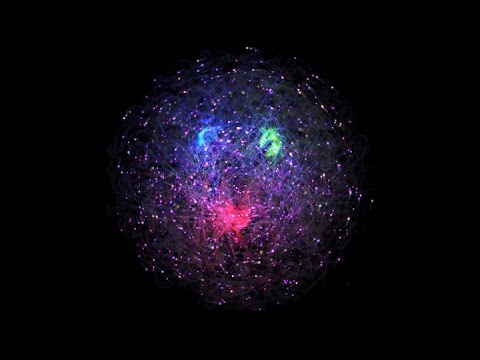 An MIT News article, “ ‘Visualizing the Proton’ through animation and film” describes the project and animation.

So many mysteries – so little time!

AWESOME ANIMATION !!! If a picture is worth a thousand words what is that animation worth ??? At least a million.

Where is the 21st century Galileo that will more completely explain quarks and gluons ???

Likely doing the grunt work in a government lab at CERN, Brookhaven, MIT, Oak Ridge, Austin, or terra incognita, revealing even more details of the beautiful particles that GOD CREATED !!!

If a picture is worth a thousand words what is that animation worth?

For some of these computer renderings, ir can accurately be said that the picture is worth quadrillions of floating point operations. The raw data that went into the recently-published image of the black hole at the centre of the Milky Way was 3.5 petabytes of data. A petabyte is one million gigabytes.