My take is the top bidder in the auction ought to turn around and auction the Cease and Desist letter from NASA preventing him/her/zir from lawfully purchasing the cockroach shit samples.

Biden has a long history of crossing personal boundaries - no sense of separation from others. The YOU must be included because those pulling his puppet strings (Joseph Marionette Biden), know this all too well (sniff, sniff).

A group of Amazon employees circulated an “Open Letter” / petition on 2022-06-27 urging their employer to take a series of actions in response to the U.S. Supreme Court Dobbs decision. 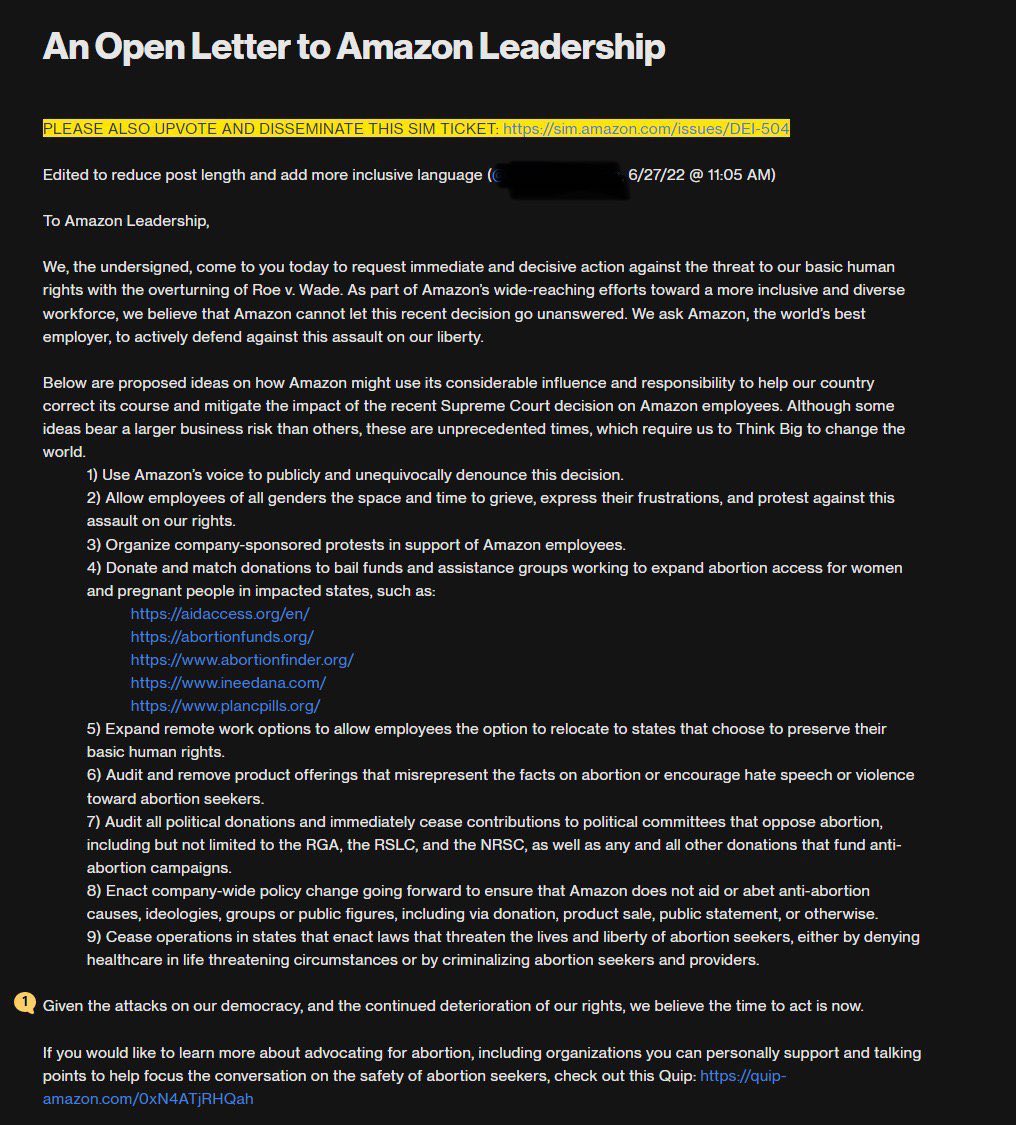 A note at the top of the letter says it was “Edited to … add more inclusive language.” I guess this is to what they were referring. Well, I guess in a world that contains Unicode character U+1FAC3, you can’t be too careful.

A group of Amazon employees circulated an “Open Letter” / petition on

Imagine what the Tesla employees’ petition will demand!

“We, the undersigned” volunteer to be part of Amazon’s coming Reduction In Force. You won’t miss us!

Do you get the sense that “our democracy” includes every imaginable political power except voting? People are free to elect state legislators which will enact some abortion rights (expect places like California to permit it at term). As well, note that “our democracy” demands “rights” unmentioned in the Constitution, but denies First (“hate speech” prohibitions, de-platforming, etc.) and Second Amendment (gun confiscation) rights entirely. Time to reduce my Amazon purchases again!

Yeah generally I use Amazon to check out things I might like to purchase and then I will go straight to the maker of the thing instead of ordering through Left-azon.

Do you get the sense that “our democracy” includes every imaginable political power except voting?

Yes, that is particularly precious: a handful of unelected judges with lifetime tenure declining to dictate law for an entire country, instead returning that responsibility to legislators directly elected by and accountable to the people equals an “imminent threat to democracy”.

I use Amazon to check out things

I do the same. Target has become a decent competitor for some stuff.

True but they are woke too. You just can’t get away from it for some things.

Target has become a decent competitor for some stuff.

If you are State side, Walmart logistics are in many instances as good as or better than what AMZN offers.

A group of Amazon employees circulated an “Open Letter”

Given the implied attention to respecting one’s physical autonomy when it comes to abortion decisions, I wonder if there was a similar petition against mandatory vaccination.

Many have noticed that since “my body my choice” was not a valid goodthinking p.o.v., it basically compromised the stance when applied to abortion debates.

Good lord these people are stupid. Why do we have to share a country with them?

Here is a Twitter thread from “alexandriabrown” about what the young today have been told and, in many cases believe.

We discuss Othering and that is also a problem. But there are two generations of Americans for whom a baseline worldview is that if the Republicans win, that can be ignored because it’s not legitimate. And that I don’t see changing. It’s only going to get uglier from here.

The problem with Target is they have gone full bore in on the trans-kids thing.

alexandriabrown – It’s only going to get uglier from here.

Future historians (probably writing in Chinese) are going to wonder why people in the West refused to see the avalanche tumbling down the slopes towards them. I wonder about it today!

I was already under the influence of my endogenous depression today before the list of these elements of our soon-to-be undoing. I am surely aware of them, but succeed in suppressing the knowledge for hours/days at a time - just for a needed respite. Of course, this thread documenting the underlying, nihilistic craziness of just about the entire West, makes it all seem futile. The end is near.

The end is near.

My apologies for feeding your dark beast of depression. Let me try to make amends! You see, I am a closet optimist. Actually, a long-term optimist.

The case was best made by Matt Ridley in his book “The Rational Optimist”, ISBN 978-0061452062. The long-term trend of human progress is upwards. Yes, there are violent oscillations around that upward trend, but there are good reasons for assuming the trend will continue. Just think about the 20th Century – two very destructive global wars, a global economic depression, and lots of smaller wars, plagues, & setbacks. Yet by the end of the 20th Century, there were many more people on Planet Earth living longer healthier better-fed lives than at the beginning.

We ourselves may not live to see the recovery from the current stupidity and no civilization lasts forever, but the human race will go onwards & upwards. We can take heart from that knowledge.

It’s on purpose that’s why. The powers that be are moving capital out of the west to the east and they think a huge benefit will come their way in terms of power and money. The level above the powers that be, the handlers, have orchestrated this decline to foster a global ethos in the major countries’ leadership.